Dunkeld Trout Hatcheries leverages its location in South Africa to supply off-season demand from the other side of the equator. 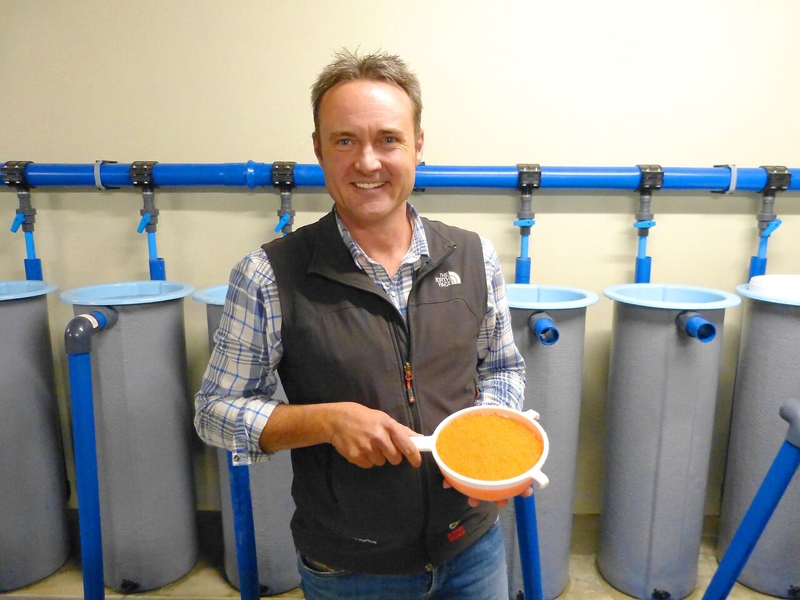 And with this goal firmly in mind, Dunkeld built a state-of-the-art hatchery to produce competitively priced off-season trout eggs for northern buyers.

And now, two years since starting operations, Dunkeld has established itself at the largest certified-disease free rainbow trout breeder in the Southern Hemisphere. It maintains a broodstock inventory of 40,000 fish that produces 60 million ova a year. Globally, it is ranked “about number six”.

Two years in the making

Coming up with high-quality product necessitated more than the usual amount of groundwork.

Year 2017 marks Dunkeld’s first full year of production. “It takes two years of biannual disease-testing and routine surveillance before we could claim freedom from all the diseases the species is susceptible to and only then could we export our product and provide customers assurances of our status. Equally important to out-of-season availability, quality and performance, is confidence in the disease-free certification,” said Charsley, who has over 20 years of trout production experience in both the Southern and Northern Hemispheres.

“Dunkeld is certified as free from all recognised trout pathogens and the certification meets the highest standards required by OIE, DEFRA (UK) and the EU. Health certification can be provided as required by individual countries,” he said.

The Dunkeld Hatchery health and certification program is monitored by Dr. David Huchzermeyer, who is supported by the South African Government Veterinary Services. Virology, bacteriology and parasitology samples are tested at the Onderstepoort OIE-approved Veterinary Institute. They are also in the process of completing GLOBAL GAP, BAP and ASC accreditation.

“The next phase is the development of a Northern Hemisphere production facility so that our customers can obtain the same reliability and proven product all year round,” Charsley said. “We are also in the process of developing a large RAS facility for the production of trout for the table markets. South Africa remains a net importer of trout so we aim to sustainably contribute towards this.”

Ninety-five percent of the ova output is exported. Iran, Russia, Georgia, Romania, Turkey and Bulgaria are considered “large markets”. There are likewise shipments to the United Kingdom and Kenya and smaller market shares in Western Europe.

In South Africa they face some competition, he said, “The primary difference between Dunkeld and the other two producers is that we are dedicated to the production of live ova. The other producers are primarily fish producers that also produce eggs in the winter months.”

Asked about the hatching rate of Dunkeld trout ova and the industry average, Charsley said, “It’s a complicated question. I would think the industry standard guarantees a 90% hatch-out rate and we guarantee 95%. But we often find that it varies from country to country and farmer to farmer, with some efficient farmers achieving 99% and emerging farmers only achieving 85%. However, to maximize our customers’ potential, we help guide them through the process to ensure the best possible results.”

Looking back to when they were setting up the company, he cited the biggest challenge was the procurement of state-of-art-equipment.

“South Africa is far behind in terms of RAS systems as the industry is still in its infancy so we had to go abroad to source and purchase most of our equipment. With a volatile exchange rate and a rather weak currency this made it challenging.

The other challenges included importing high quality fish feed as the South African products are not really designed for recirculating systems and, as Dunkeld owns the largest freshwater-recirculated aquaculture establishment in South Africa, it needed a reliable feed partner. Due to legislation it was a challenge to obtain the correct permits to import feed. Fortunately, this is now all in place, Charsley said.

Dunkeld is located in Africa’s trout capital, Dullstroom Highlands of the Mpumalanga province. The facilities have 46 100,000 liter-capacity broodstock tanks, a nursery, a grow-out facility, and a hatchery. All these are fully insulated buildings. Each building represents separate epidemiological units and each system has its own filtration, biological filtration and water supply. Dunkeld currently recirculates, filters, sterilizes, degases, temperature controls and oxygenates ~72,000 cubic meters per day.

The location enables them to source water directly from “pristine underground water with no agriculture, aquaculture, residence or industry in the catchment area.

Charsley and his team attend all the major aquaculture shows and visit customers around the world. Most of Dunkeld’s market visibility, though, is generated by the social media, including the web. “There is also an amazing amount of word-of-mouth about us,” he said.