Ever since he was a young boy exploring the flood plain of a brook near his childhood home in New Jersey shellfish biologist Rick Karney has always been fascinated by the natural world around him. 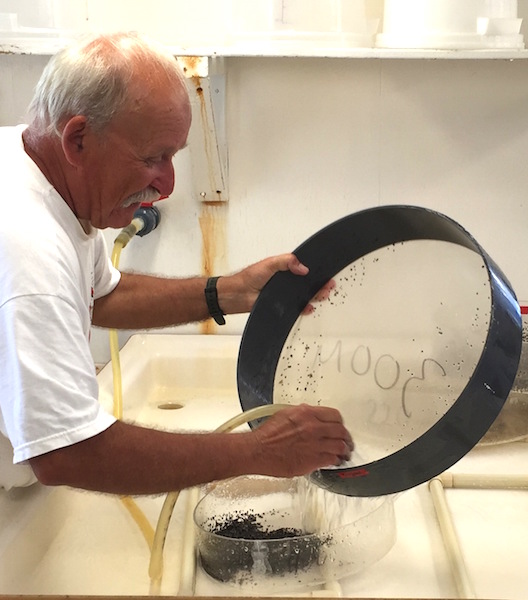 “I spent a lot of time in those woods and brook,” Karney told Hatchery International. “Sadly when I was 10 they built Interstate 287 right on the other side of the brook, straightened the brook and took out most of the woods. Paradise lost. That loss still feeds my passion to protect the natural environment.”

The United States-based director of the Martha’s Vineyard Shellfish Group (MVSG) is stepping down after four decades of founding, developing and fostering the shellfish aquaculture business in waters around Martha’s Vineyard, a small island off Cape Cod, Massachusetts.

“My father had a boat and the family spent weekends at a lake or at Barnegat Bay on the edge of the Jersey Pine Barrens where I got to catch and observe lots of marine organisms. At one point when I was older, I watched a documentary about an ecologist and remember deciding that was exactly what I wanted to do.”

He then led a life where he helped shape shellfish aquaculture in Massachusetts and beyond.

At 66 Karney has retired as director, handing over most of his responsibilities to his longtime assistants, shellfish biologist Amandine Surier and Emma Green-Beach, who will manage the hatchery operations the group manages around the island, including the solar shellfish hatchery he helped build over forty years ago.

Karney came to the Vineyard from Virginia in the 1970s as a young shellfish biologist, hired by the late Michael Wild who was the coastal planner for the Martha’s Vineyard Commission. Wild wanted Karney to assist shellfish constables in the six Island towns. At the time there was no regional program, no hatchery and aquaculture was a novel idea in a place where wild shellfish were abundant, the water unpolluted, and the surrounding land sparsely developed.

“There was no hatchery on the Island when I arrived in 1976,” he explained. “My first job out of college in 1973 was at an experimental shellfish hatchery at a field station at the Virginia Institute of Marine Science in Wachapreague on the Eastern Shore of Virginia.”

It was there he said he first learned hatchery design and culture techniques.

“I’m sure one of the reasons I was hired on the Vineyard was because of my hatchery training. It was clear that my governing board wanted me to begin a shellfish hatchery on the Island,” he said.

Prior to his arrival, the town of Tisbury had been given a parcel of land on Lagoon Pond as conservation land and there were some small tanks set up in one of the outbuildings where a 4-H marine biology club met,” he said, referring to the non-profit national youth development program.

“I used that cinder block building to experiment with trying to spawn some shellfish and by 1978 we built the small pilot hatchery where we produced our first seed shellfish,” he explained. “The solar hatchery was built in 1980.”

It was the first public solar hatchery in the country.

His bonafides and expertise over the years went far beyond the island’s aquaculture industry and many people in the industry, locally and internationally, also consider him a colleague, mentor, and friend.

“Well, it’s interesting. He is one of those people who acts locally and thinks globally,” Woods Hole Oceanographic Institute’s visiting scientist Scott Lindell told Hatchery International. “By that philosophy he has done a great service to the island in jump-starting the shellfish industry out there. He has always been active in state and national organizations and a mentor for young biologists and those who work summers in marine science.”

Lindell travelled with Karney to Mexico for Aquaculture without Frontiers (AwF), the non-profit NGO that promotes and supports sustainable aquaculture through improving rural livelihoods in developing and transition countries.

But it was their work together closer to home that brought the two aquaculture biologists to a greater understanding of the difficulties local aquaculture entrepreneurs have just getting started in the industry.

Karney led an effort to develop several locations around Martha’s Vineyard for offshore shellfish aquaculture projects. They were the first offshore aquaculture requests for permits in Massachusetts state waters, which began a huge march through the state and federal permitting process.

After it was all said and done, Karney’s path is now in place for shellfish farmers to follow, making it easier for them to get through that complex phase of starting a new seaweed or shellfish farm around the island. A number of blue mussel and sugar kelp pilot projects have blossomed from his efforts.

Karney also humbly touts the pioneering hatchery methods he and his team devised with bay scallops. Now he’s focused on slowing down and stepping aside. His official title will be MVSG director emeritus.

“Presently I’m semi-retired and plan to work about half-time with the shellfish group, helping out where needed and maybe at some point pursuing some individual projects,” he explained. “All in all I’m really happy that my career evolved as it did and can’t think of anything I would have changed. I have been very lucky to work in a field I love, provided by my Board with lots of freedom to pursue my various interests… and all the while doing what I always felt was a meaningful mission.”