Features Breeding Profiles
Seeding the future of oyster farming in the U.S. 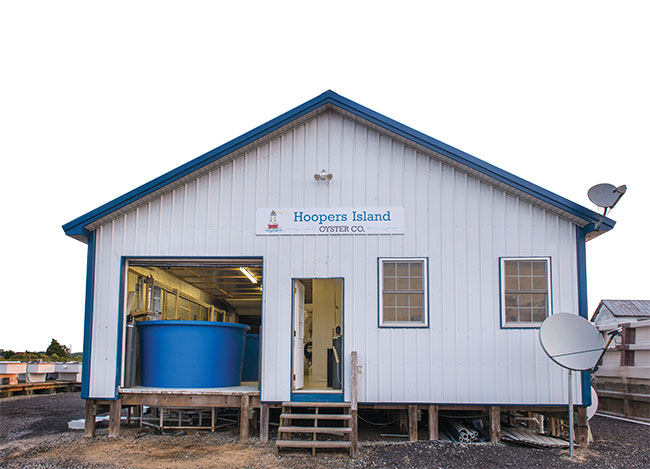 In an environment eager for good news, the announcement of a strong spring spawn and “really healthy larvae moving through the hatchery” at Hoopers Island Oyster Co. lifted spirits along the U.S. Eastern Seaboard after a year when persistent rainfall and low salinity had doused them.

Much of the new seed now being reared at Hoopers Island’s nursery will be grown out on the company’s leases in the Chesapeake Bay.

Over the years, this Maryland-based business has morphed into one dedicated to helping the overall oyster industry thrive – supplying seed and equipment, along with generous doses of advice. The hatchery, which began full-time operation in 2017, already accounts for 15 to 20 percent of company sales.

“Our goals as a commercial hatchery obviously are to produce as much as we can to support not only our own business, but provide infrastructure for other aquaculture farmers up and down the mid-Atlantic,” says hatchery manager Natalie Ruark.

This spring’s spawn has been “a good start,” she says.

Off to a good start
Such success seems to be occurring at other hatcheries in the Chesapeake region, Ruark says, which is also good news. To meet the growing needs of both farmers and restoration efforts is a challenge.

“It’s a lot of demand with only a few producers. After a bad year, it really makes up for us to have a good one,” says Ruark. “It’s a night and day difference,” she adds.

At the same point a year ago, salinity was in the single digits, hovering at six to seven parts per thousand (ppt). This spring it shot up to 17 ppt and, even after rainy days, is holding in the 14 to 15 ppt range.

In addition, Ruark notes, the quality of the ambient water has improved. Hoopers Island’s hatchery is located in the remote community of Crocheron (population: 21). Even though there is minimal agricultural runoff and a tiny population, the heavy rainfall last year still produced “sub-optimal” water quality.

For the Hoopers Island hatchery, work began in earnest in early February with the conditioning of broodstock and algae propagation. About eight weeks later, in a white building with turquoise trim, technician Allison Fitzhugh was ready with her scalpel to extract gametes from ripe, shucked oysters and to start mixing eggs from diploid females and sperm from tetraploid males in seawater.

The process resulted in fertilization, cell division, and then hungry larvae swimming freely in 1,500-gallon tanks. This procedure will be repeated every week until September. “We produce as much as we can for the time that we have,” says Ruark.

In 14 to 18 days, the larvae are ready to move to the nursery and set on crushed oyster shell in an upweller. In three to five days, they become seed. 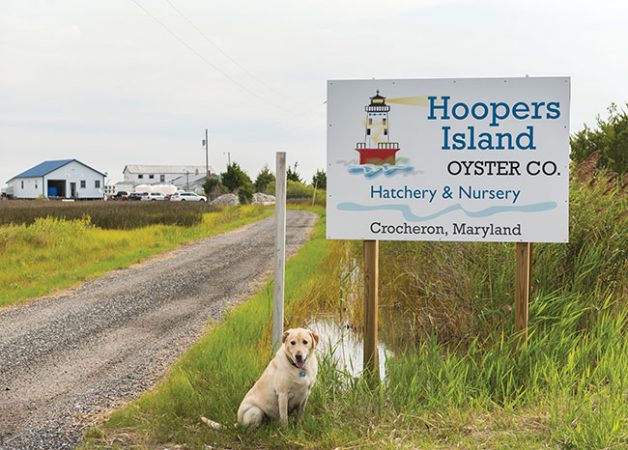 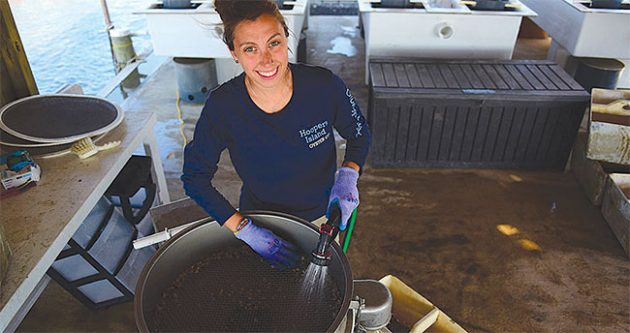 Seed specs
Hoopers Island sells seed in seven sizes, from one to 12 millimeters. “Typically, we see a lot of our customers start out with a mid- to larger-size seed, in the six to 12-millimeter range,” notes Ruark.

That is because the equipment to handle that size seed costs less, and new growers want to get to market sooner. Start-up expenses are, of course, a key consideration for “oysterpreneurs,” as Hoopers Island calls them.

There has been a dramatic increase in these new farms in the US, according to the USDA. For example, between 2013 and 2018, the number grew 123 percent in Virginia and 313 percent in North Carolina, both states Hoopers Island serves.

But as growers become established and diversify their operations, they opt to invest less money in seed and more labour into their product.

“We’ll see those customers over the years make decisions that will allow them to handle seeds that are one and two millimeters because it’s more cost effective for them,” she says.

The hatchery’s primary focus is triploid production. “That circles back to our goal of providing infrastructure to aquaculture operations. Some 90 percent of the customers we service would prefer a triploid product.” To spawn those triploid larvae, Hoopers Island relies upon the storied tetraploid lineages of the Virginia Institute for Marine Sciences (VIMS).

Disease resistance
All of the Eastern oyster (Crassostrea Virginica) seed that Hoopers Island sells originates from broodstock selectively bred at VIMS. That is a mark of distinction.

“By developing disease-resistant triploid oysters, the VIMS team literally saved the oyster industry of the Chesapeake and really the entire East Coast. With broodstock lines resistant to MSX and Dermo, they made modern oyster aquaculture possible,” says Chip Terry, co-founder and chief executive of Oyster Tracker, farm management software now used by over 40 growers around the world.

Currently, Hoopers Island offers two strains for purchase: DBY-H and LOLA (yes, they are pronounced as girls’ names). “These strains have been painstakingly cared for and created,” says Ruark, echoing Terry’s comments about VIMS.

Which seed does she recommend? As a hatchery manager who has a background in both biology and environmental sciences, she says she will first ask customers: What type of environment are you growing in? High or low salinity? What is the prevalence of pathogens present on your lease?

“Those kinds of things all factor into the performance of your seed along with the strain that the hatchery produces,” she says.

With pathology testing also conducted by VIMS, Hoopers Island is able to transport and sell seed across state lines to New Jersey, Delaware, Virginia, and North Carolina, as well as in its home state of Maryland.

Larvae are fed up to eight times a day. 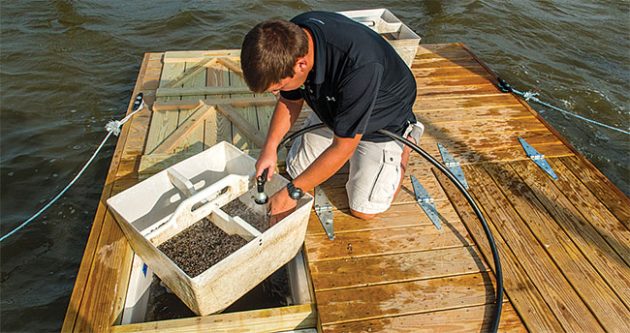 At grow-out, the oysters are regularly pulled, cleaned and graded.

Equipment
Although Hoopers Island started as an oyster farming operation, its success in manufacturing its own aquaculture equipment attracted the attention of other growers. Today, equipment sales represent the largest portion of the company’s business.

Equipment is designed with practicality, efficiency, and durability in mind, says Ruark. Its upwellers are a good example of how Hoopers attempts to offer its customers flexibility, too. The tank itself is fixed, but the silos that house the seed can be customized with mesh appropriate for a range of seed sizes.

“A tank comes with a set of 12 silos. A lot of time we find customers like to tailor four silos for setting, four for one- and two-millimeter seed, and four for something larger – all in just one unit.”

Hoopers Island has staked out a position in the growing U.S. oyster industry that goes well beyond its own farming operations. It hopes to revolutionize the business “from seed to shuck.”