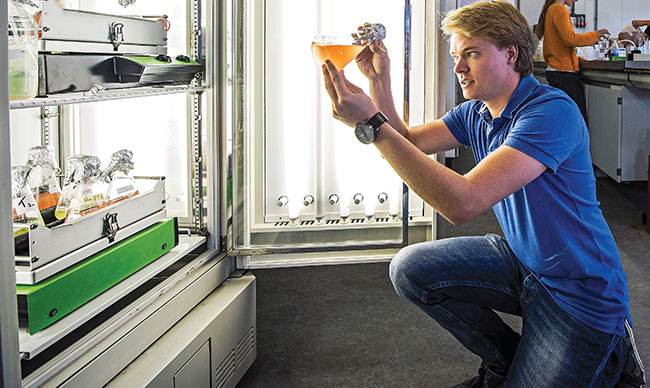 Pieter Oostlander, PhD candidate at the Wageningen University and Research, and his team focused on cost price calculation of microalgae production in aquaculture based on real-world production data and computer models. (Photo: HZ University of Applied Sciences)

The cost of microalgae production in aquaculture hatcheries could be minimized and production volume maximized by optimizing temperature and light conditions, according to a new study from the Netherlands.

Adding more artificial light could reduce cost by a third in small-scale systems and scaling microalgae production facilities from 25 square meters to 1,500 square meters could lead to a 92-percent cost reduction, the study found.

“I would like hatcheries to realize the true cost of microalgae production in their current form and show how it can be improved,” author Pieter Oostlander, a PhD candidate at the Wageningen University and Research (WUR), told Hatchery International. The study was part of his PhD thesis and the Robust Algae for Aquaculture (RAAQUA) project.

The RAAQUA project was a collaboration between the HZ University of Applied Sciences, Vlissingen, the Netherlands, and the Department of Bioprocess Engineering of WUR and done in collaboration with the Dutch aquaculture industry.

The cost of maintaining a microalgae production facility has been estimated to account for an average of 30 percent and up to 60 percent of the total budget of aquaculture hatcheries and nurseries.

“If we can work together towards more optimized production systems in terms of cost, the aquaculture products from hatcheries could become more affordable/economically feasible competitors of fisheries, etc. More/new land-based aquaculture products could potentially become an interesting business case, ultimately resulting in a more sustainable industry,” Oostlander says.

The final results of the project were presented to the Dutch aquaculture industry.

“It takes time to change a production system or adapt an existing system towards a more cost-efficient strategy for microalgae production,” he says. “Based on the large difference in cost price between the optimized scenarios and current practices, it is worth it to consider changing towards more cost-efficient production.”

To counter biases on laboratory experiments or computer models/calculations in “completely changing” a production protocol, they established a research facility using pilot scale tubular photobioreactor as part of the project at the HZ University of Applied Sciences. Research was conducted at larger scale representing true production scale in hatcheries.