Fish health and the costs of regulations will be in the spotlight at the USTFA Annual Fall Conference happening in Seattle from September 4-6. 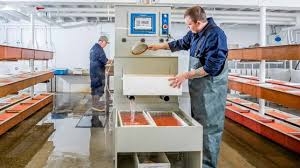 As the aquaculture industry grows and the complexity and costs of regulations increases, fish farmers are compelled to think differently and adopt strategies and techniques that can drive business growth. The United States Trout Farmers Association (USFTA) conference promises to impart market intelligence via 20 speaker sessions as well as networking opportunities with its lineup of social events.

“We have a number of speakers who will be addressing issues around two of the biggest concerns in aquaculture—the cost of regulations for farmers, and fish health. We will also have a panel discussion where farmers will answer questions about some of the issues facing the industry,” says Ron Johnson, administrator at the United States Trout Farmers Association (USFTA), which organizes the event.

A fact sheet on the findings of a recent study on “Regulatory Costs on US Salmonid Farms” will be handed out during the conference, adds Johnson.

The organizer expects around 80 delegates, including farmers, service providers, equipment vendors, and researchers in the trout farming industry. “I expect, because of the venue, that we will see a number of West Coast people,” says Johnson.

He says Seattle was a fitting choice for this year’s edition as the city is home to the world’s largest provider of live trout eggs—Troutlodge. Participants will have the opportunity to tour its Trout Springs facility, as well as visit Cooke Aquaculture’s Scatter Creek facility, where smolts are being raised in RAS tanks.

The conference also has a trade show component that features around 15 exhibitors. “Each registered vendor will be given time during the Vendor Session on Wednesday afternoon to highlight their products or tell delegates what’s new. The one-hour session will be divided between participating vendors,” says Johnson, who noted that this is a new feature.

Another new feature is a cooking demonstration by chef Dani Klontz during the President’s Reception on Wednesday evening, where she will prepare locally grown trout and seafood. “Dani will take fish that’s donated by the some of the farmers and do a whole series of dishes and explain how best to utilize the trout. She’ll cook it up and delegates can come up and sample them,” he says.

Registration details can be found here.