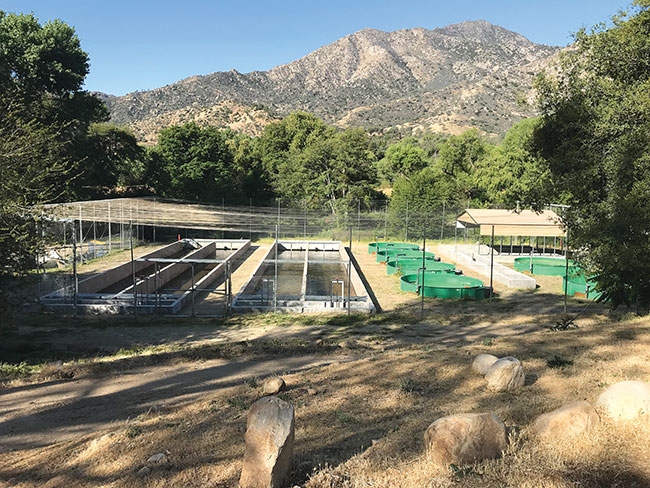 “Things were a little bit run down and they wanted to come up with a facility that had newer raceways, a spawning facility, some more modern round tanks, and they dropped in five wells, so that we could get cooler water,” said hatchery manager Tony Holland. “We have the ability to run them off the grid or standby power. They have a backup generator.”

For years the hatchery has struggled with water too warm to effectively raise fish in the summers, Holland said. Being able to tap into a well will allow the facility to rear fish year-round. One side of the hatchery raises triploids which come from a different hatchery and are planted throughout the Kern River drainage.

“What this program will allow us to do is have diploid Kern River rainbows that are native to this water and they’ll be reared in this new area. This summer, in August, we’re going to pull fish out of the Sequoia National Forest and we’re going to helicopter them out. There’s going to be 50-100 fish that we’re going to use as the broodstock for this program. The new mission is to bring those in and raise them into a broodstock and in the future be able to plant them out.”

Holland said the goal of the renovations and the new rainbow trout program is not only to provide fishing opportunities and to mitigate the impacts of the fishery, but to help with restocking of Kern River watersheds.

A look at the new facilities at the Kern River Hatchery