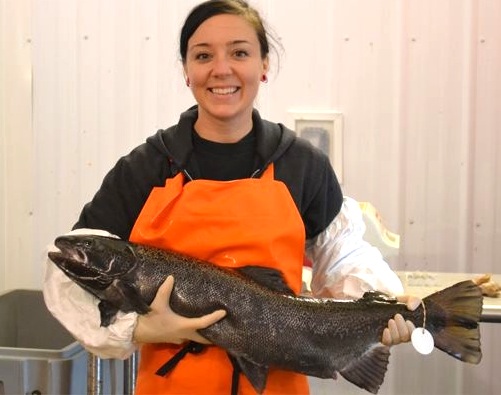 Research exploring the causes of reduced survival rates of Atlantic Salmon embryos is underway at the University of Maine.

Greg Lambert, Freshwater Production Manager at Cooke Aquaculture USA, says he finds it “refreshing that Dr. Heather Hamlin and PhD candidate LeeAnne Thayer have chosen to address a specific issue important to the industry, rather than, as often happens, doing their own thing and then wanting the industry to apply the findings.”

The two researchers have been exploring the causes of reduced survival rates of Atlantic salmon (Salmo salar) embryos.  Under Hamlin’s direction at University of Maine’s School of Marine Sciences, Thayer has been doing the research for her PhD thesis, exploring the possibility of a correlation between maternal plasma hormone and calcium concentrates and embryo survival and also, if environmental contaminants could be playing a role in reduced survival.

Hamlin, a reproductive endocrinologist, had learned about decreased embryo survival several years ago when she attended a Salmonid Hatchery Roundtable in Maine with federal, state and private participants.

“The biggest issue expressed at the time was the problem of reduced embryo survival,” she says.  “When I came to Maine it was the first problem I wanted to tackle due to its relevance and importance to Maine’s economy.”

She approached Lambert two years ago to propose the research, and he has provided samples and hatchery access, hoping she and Thayer will come up with information that will help increase survival rate in the fragile period between the green and eyed stages of development.

Survival rate was highest in the 1990s, climbing to near 90 percent, but Lambert says that over the past 10 years, it has fluctuated from 50 percent to 90 percent, with an average in the low 70s.  Because the rates are not reliable, hatcheries can no longer contract to sell surplus eggs.

It is a worldwide problem, Lambert says, which puts Maine salmon hatcheries at a competitive disadvantage, because if they have a bad year, they are limited to certified North American eggs, and cannot make up the difference by purchasing eggs from Norway or Chile.

In their research, Hamlin and Thayer discovered a higher survival rate of embryos that come from eggs of females with higher levels of estradiol (E2) and 11-ketotestosterone (11KT).  On the other hand, when they analyzed data to determine if there was an increase in the enzyme, EROD, which increases in response to certain contaminants in the environment, they found no correlation.  (Still, they hypothesize, there could be other contaminants at work which do not show up in EROD.)  They also found no correlation with calcium levels.

Hamlin says their findings of the positive correlation with E2 and 11 KT were promising, but generated further questions about “why?”

“If we assume that females that produce batches of eggs with high survival have peak concentrations of hormones,” she says, “we next need to figure out where the females with lower hormone concentrations are on the seasonal continuum.  Are they on the early side, or are they late, or is it possible that their profile is completely different and they won’t ever reach the peak concentrations we see in the high performing females.”

To explore these questions, she and Thayer have received a 15 K grant from the Maine Aquaculture Innovation Center and a 150 K grant from the United States Department of Agriculture.  With continued support by Cooke, they will be working on this research throughout the coming year.

Ultimately, Hamlin says they hope to determine if there is a way to manipulate whatever controls higher hormone concentrations – perhaps by modifying environmental factors like water temperature or light – so that hatcheries could ensure when they take eggs from females at the same time all would be at peak concentrations.

She says that because of the fluctuation of water temperatures at different hatchery sites, “It wouldn’t surprise me if temperature could be playing a role in some way.”  She also is wondering about hormone concentrations in the eggs.

She, Thayer and Lambert know there are plenty of other avenues to explore.  Lambert suspects problems began when the salmon aquaculture industry needed to change industry techniques due to biosecurity concerns.  “It used to be common for aquaculture to have salt water cage broodstock and bring them to land two months before spawning occurred,” he says. “But then came a push for land-based broodstock.”  He thinks this change came about at the same time they started to see a decrease in embryo survival.

“There’s a lot of guessing,” he says.  “Changes in feed from fish oil fishmeal to plant-based alternatives could play a part.  We can’t say exactly what’s happening, but it’s refreshing to be working hand in hand with researchers to see if we can improve on this issue.”