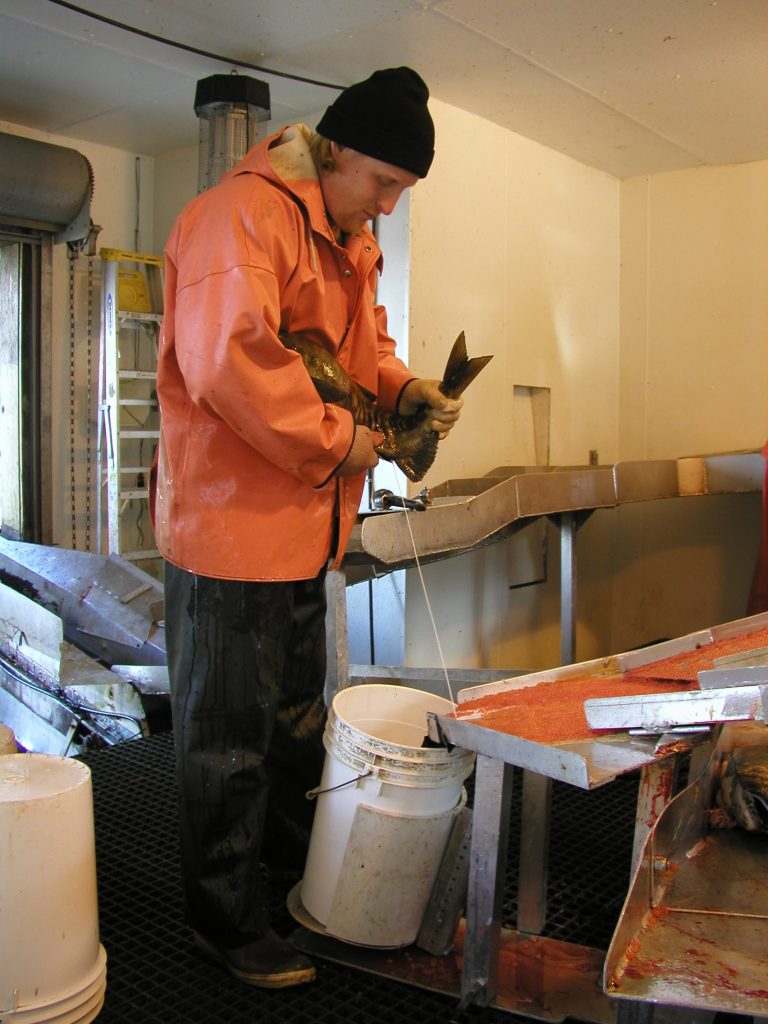 Thor Eppler “bucking” a chum salmon to extract male gametes on an egg slide at the Neets Bay Hatchery.

Some 50 million hatchery salmon were caught by Alaskan fishermen in 2019, according to the recently released annual salmon enhancement report by the Alaska Department of Fish and Game (ADFG).

Valued at $118 million, they represent 18 percent of the state’s total salmon harvest. The report was primarily for the benefit of the state legislature so it can evaluate the success of the enhancement efforts, but the same data is used by hatchery operators and local ADFG staff to develop management plans.

ADFG section chief Flip Pryor said the numbers for hatchery salmon are subject to all the same conditions and influences as returning wild salmon.

“When natural returns do well, so do our enhancement efforts and vice-versa,” Pryor said. “In 2019, the natural and our enhanced runs were both modest compared to other years.”

Thirty-nine million hatchery salmon were caught in 2018 and while 2019 saw an increase, it fell well short of the 79 million hatchery salmon that were forecasted in the 2018 report. Pryor said there is much speculation as to the potential causes, but nothing definitive that would cause authorities to consider making changes to the system.

“It’s assumed that you just have high predation years, where the release coincides with something – whales, cod, Pollack – something they run into and have a high mortality very early out of the hatchery,” Pryor said. “That’s assumed to be what’s going on. These things can be localized.”

In Alaska’s Southern Southeast sector, chum salmon returned at only 7 percent of what was forecasted and pink salmon in the Prince William Sound area only returned at 1.6 percent. Pryor said the Prince William Sound pink salmon and Southeast chum are the largest contributors to Alaska’s fisheries. In fact, those fish in those sectors were primarily responsible for a significant increase in egg take numbers in recent years, which have mostly been consistent since 1995 but have reached their highest ever numbers in the past three years. Pryor attributed this to increases in hatchery permitted capacity that were approved years ago and are starting to produce adult returns.

Pryor also noted that Alaska has experienced warm and dry conditions that affected holding and migratory behavior of salmon, which could have made an impact – although the impact of weather and drought was only mentioned in relation to the Southeast region in the report itself.

Due to the complexity of the information being dealt with – the number of species, release areas, other aquatic species that could influence returns, environmental impacts – the firm numbers for hatchery salmon returns could be impacted by a variety of factors.