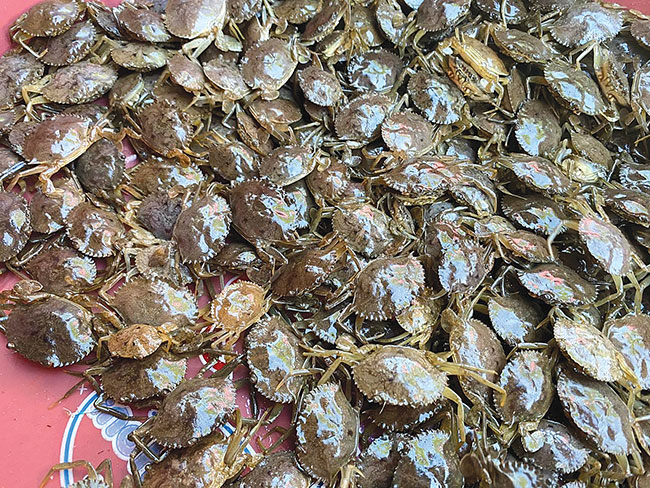 The Philippines is among the world’s leading producers and exporters of mangrove crab, Scylla serrata. Production in 2018 was 21,680 metric tonnes, a 14-per-cent increase over the previous year. Of the total volume, almost 96 per cent came from the aquaculture sector.

Mechanisms are put in place to boost the industry’s sustainability. The latest of these came in January 2020 with the Fisheries Administrative Order (FAO) 264.

With the exception of hatcheries and registered gatherers and traders, there is a ban on catching, possession, transport, selling, trading and exportation of mangrove crablets, juvenile mangrove crabs and gravid mangrove crabs. The FAO requires a bigger allowable size for crablet caught and transported.

Conservation
Arsenio Bañares has observed that previous practices of catching crablet from the wild leaned more towards indiscriminate catching. All sizes were up for grabs as soon as they hatched. “This is not sustainable. The wild stock will be depleted,” he tells Hatchery International.

Bañares is the chief at the Fisheries Management, Regulatory and Enforcement Division of the Bureau of Fisheries and Aquatic Resources (BFAR), Region 2. Located in Northern Luzon, the region is a major producer of crablets and crabs.

Geronimo Tavas, a fishpond owner in Cagayan in Region 2, implies that it would finally give locals like him the opportunity to expand to crab growing. Wild-caught crablet traders have been prioritizing buyers from outside of the province, leaving them scant.

A mangrove crab expert acknowledges the conservation strengths of the new regulation: better conservation of the remaining crab resources and lesser damage to the habitat.

The new regulations also encourage the establishment of hatcheries to supply the requirements of the farmers, she adds. Hatchery production ensures the identification of species and year-round production.

“Since there are three to four Scylla species in some areas in the country, identification is difficult when size is small. However, the buyer is assured of the species’ identification if it is sourced from the hatchery,” she says.

She notes, though, some hatchery operators may find the registration of their hatcheries with BFAR “bothersome.”

A crab-fattening RAS farmer, Gerry Balingit Jr., notes that the supply chain has been disrupted, citing a 30-per-cent decline in crabs sold in the market. His stock is composed of king crabs, S. seratta, which he exports.

Regulatory impact
Balingit sources post-molt water crabs and class “B” crabs from traders/suppliers, seafood buying stations and fishpond operators. Lower supply means higher prices, which is passed on to the buyers. He is confident, though, that the export demand indicates it will never be priced out of the market.

FAO 264, Balingit says, has good intentions in general. The downside, he notes, is “very limited supply of crablets for fishpond operators, and the price has increased.”

The limited supply has been triggered by the new allowable wild-caught crablet size that could be sold and transported. The 5-cm carapace is much bigger than what was previously allowed and there are much fewer of these to catch.

Crablet stakeholders in Gubat, Sorsogon in Region 5, also appreciate the conservation efforts and understand the impact on the supply chain order only too well. Like their counterparts elsewhere in the Philippines, gatherers said the lower catch is economically crippling them. Diving deeper into the topic, the nursery owners explained why 1.5 cm – and not the required size of 5cm – is the good size for grow-out.

A documentary and public documents provided insights on the nature of their town industry, roles of frontliners and impact of the 5-cm requirement. Gubat is a major producer of crablets.

Declawed
Crablets are declawed before delivery to prevent cannibalism and easier handling. As 5-cm crablets grow in the grow-out ponds, there is the tendency for the claws to develop slower, asymmetrical and disproportionate to the body size – qualities that are not agreeable to export standards. The survival rate is also lower.

Grow-out farms prefer sizes between 1.5cm and 3cm. At these sizes, they can survive 72 hours without water. The survival rate is high. When the claws are removed, they eventually develop proportional to body growth.

Mud dike pond nurseries rear 0.5-mm megalopa which is about the size of a fly. This is caught just off the town’s shores facing the Pacific Ocean. Growth of 1.5cm is reached in one month with an average survival rate of 60 per cent. Out in the ocean, the megalopa survival rate is only two to three per cent, mainly because of predation. In the pond, aside from protection from predators, it gets proper diet.

The town’s industry began almost 50 years ago with the traditional practice of catching and selling crablets. It took off in 1994 when a local, Fernando Policarpio, thought of inserting a step between consolidating and selling. Rearing in mud dike nursery ponds improved survival rates. This innovation made it possible to increase production and, eventually, establish Gubat as a reliable year-round source of quality crablets for the entire Philippines.

Theirs is a structured commerce composed of gatherers, consolidators, crablet raisers who run nurseries, and traders who deliver all over the Philippines. The town’s high water salinity discourages grow-out operations.

Commerce aside, they have stewardship and sustainability programs. These include responsible catching practices, mangrove reforestation, shore clean-up and buy-and-release of gravid broodstock to the sea. They observe a closed season to allow population to recover. To maintain biodiversity, they have developed a catching method that uses light to attract megalopa to the surface before being scooped up, eliminating the inclusion of non-targeted animals.

Crablet take three months to reach 5cm in nursery ponds, with survival rates of only 10 to 20 per cent, it was explained. Along with feed costs and other related expenses, crablet prices has increased by 100 per cent. Michael Estargo, a nursery owner and trader, said each piece now sells for 40 Philippine pesos (US$0.83). Meanwhile, supply in the town’s nurseries is significantly dwindling.

Gubat stakeholders’ concerns and appeal for the crablet size to be reduced to 1.5cm were elevated in October to the Philippine Congress and Office of the Secretary of the Department of Agriculture (DA), which has jurisdiction over BFAR.

DA-BFAR is receptive to the position presented by the Sorsogon industry, said Joeren Yleana, aquaculturist at Capture Fisheries Division, BFAR Central Office. In November, at presstime, an initial internal meeting has been scheduled between central and Region 5 offices of BFAR.

Quinitio said that Philippine hatchery production can cope with demand if all the establshed crab hatcheries and additional hatcheries under construction will be fully operational.