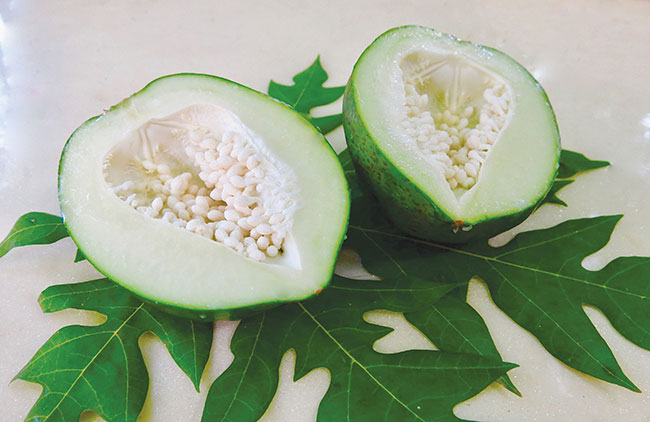 The study, “Beneficial effects of dietary papain supplementation in juvenile sterlet (Acipenser ruthenus): Growth, intestinal topography, digestive enzymes, antioxidant response, immune response, and response to a challenge test,” published on Aquaculture Reports, likewise demonstrated that papain improved growth efficiency and feed utilization over a period of 56 days, and stimulated immunity in aquaculture conditions. The feed supplementation is safe for both fish and the natural environment.

Papain is an enzyme extracted from different parts of papaya (Carica papaya) such as the leaf, unripe fruit, and fruit sap. As a feed supplement, papain increases the digestibility of protein in feeds and improves its assimilation, which affects feed utilization and growth indices.

Up until this research, papain supplementation in sterlet had not been studied before. The study of Grzegorz Wiszniewski et al. examined the impacts of papain supplementation on sterlet growth, immunity parameters, enzymatic activity, the pathological structure of the liver and intestine, proximate body composition, oxidative response, and a challenge test with Yersinia ruckeri. It is a species of gram-negative bacteria, known for causing enteric redmouth disease in some species of fish.

During an eight-week period, juvenile sterlet in the control group were provided commercial feed and two other groups were given experimental feed supplemented with papain in doses of 10 g/kg1 feed (P1) and 20 g/kg1 feed (P2).

The experimental diets produced final body weights that were significantly higher compared to the control group. No fish mortality was noted.