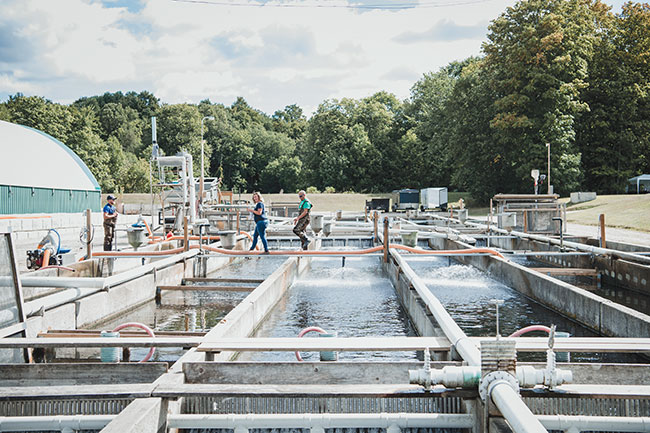 Cedar Crest Trout Farms is located in Hanover Ontario at the base of the Bruce Peninsula. Photos: Springhills Fish

The COVID-19 pandemic has hit many businesses very hard, especially small businesses. Family-owned businesses like Cedar Crest Trout Farms found their world turned upside down and their business in jeopardy as restrictions hit and order cancellations poured in. Stuck with thousands of fish with no destination and staring at a huge loss of revenue, Arlen and RJ Taylor, owners of the second-generation farm, forged this disaster into an opportunity for new success.

Cedar Crest Trout Farms
Cedar Crest Trout Farms, in Hanover Ontario at the base of the Bruce Peninsula, is located in the heart of Ontario’s rainbow trout (Oncorhynchus mykiss) production area. The location is perfectly placed to ship fingerlings to Cedar Crest’s primary clients cage farming on Lake Huron. Jim and Lynette Taylor founded Cedar Crest in 1986 and after the permitting and building process, opened the first hatchery in 1995. Jim and Lynette have retired, and Cedar Crest is now run by their daughter Arlen and son RJ, and their operations now include four hatcheries and a processing facility.

What will we do with all these fish?
In 2010/2011 Cedar Crest began scaling up their rainbow trout breeding program to meet the growing demand for fingerlings. Scaling up the breeding program meant more market sized fish were available as by-products of the increased breeding program. Cedar Crest has always maintained a significant portion of their rainbow trout production for stocking ponds and private lakes for put and take angling opportunities. Thousands of fish culled from the breeding program each year were sold as market sized stockers. The pandemic changed everything, as suddenly nearly every order for their market-sized fish was cancelled. The nature of a fish farm requires fish to be harvested or removed by sale regularly to maintain a production cycle, and allow space for other growing fish. RJ and Arlen found themselves with a huge problem; what are we going to do with all these fish?

Direct sales
Cedar Crest began selling trout locally at farmers markets as their brood program scaled up. Using their brand Springhills Fish, fresh and smoked trout were peddled successfully throughout the summer market season. “We had already started to expand our fresh fish sales and smoking when the pandemic hit,” explained RJ Taylor. “We had some success at the farmers markets, and we expanded our smoked trout operation. With the purchase of Springhills Fish, we acquired a small processing facility we began to work out of. Our dedicated team cleaned and packaged all the fish by hand on evenings and weekends.” With the onset of the pandemic and the changing buying habits of people, it was decided to try and sell excess fish directly to consumers. “We started with the local community Facebook Marketplace pages and advertising our fish for sale. Five- or 10-pound boxes, frozen fresh and delivered direct to your door. The response we got from the community was awesome. What was even more exciting was that people from other towns started to ask if we would expand delivery to their town.” With this snowballing local success, Springhills Fish began advertising further and further away. 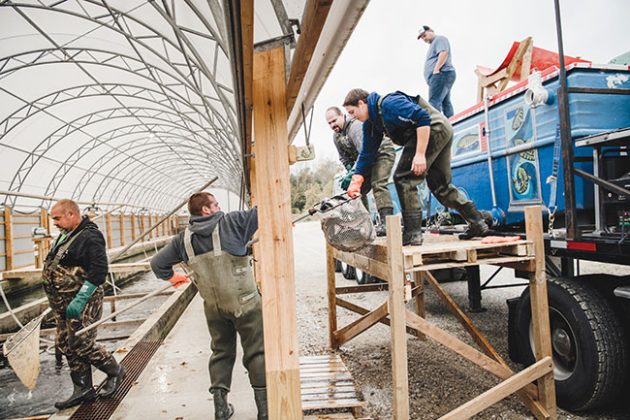 In the early 2010s, Cedar Crest scaled up their rainbow trout breeding program to meet the rise in demand for fingerlings. 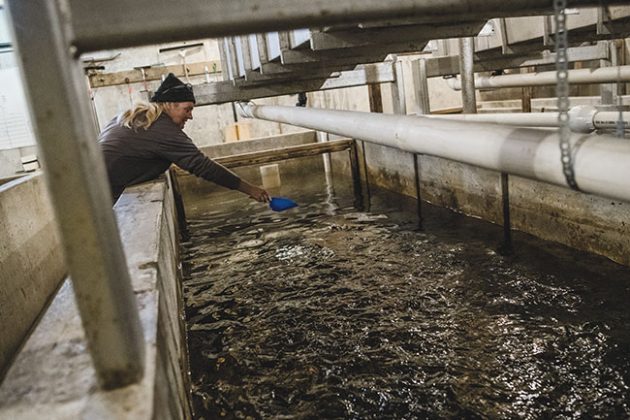 Cedar Crest began to locally sell trout as their brood program scaled up.

Expanding products
“We found customers loved our rainbow trout products, as we knew they would, but we kept getting asked ‘what other types of fish do you sell?’ We were asked so many times that we decided to see what else we could sell. We never pictured ourselves selling someone else’s fish, so it was a difficult decision for us, but in the end are very happy we did,” said RJ.

“We are proud fish farmers,” explained RJ, “and believe wholly in the aquaculture industry, so we all felt it was a compromise selling wild caught fish. We took the decision very seriously but, in the end, the Marine Stewardship Council certification of the Lake Erie walleye fishery made us feel the fishery was sustainable and it was acceptable for us to sell them.” With the new additions, Springhills Fish offers their customers a variety of fishes and also mixed sampler boxes of species such as the 10 lbs four fish combo featuring trout, char, barramundi, and walleye.

The Taylor’s own processing facility has grown significantly, now employing nine people and operating two to three days per week with machines for cleaning and packaging. Fish are delivered live from the hatchery. At the processing facility they are netted from the tank, percussive stunned, bled, headed, gutted, vacuum packaged, and frozen within three hours. “Our quick processing time from live to frozen avoids rigor mortis setting in and gives our frozen fish extremely high flesh quality,” explained RJ. 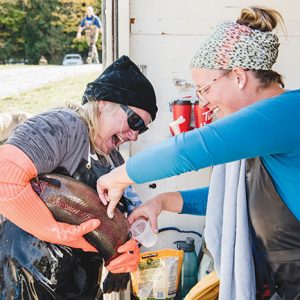 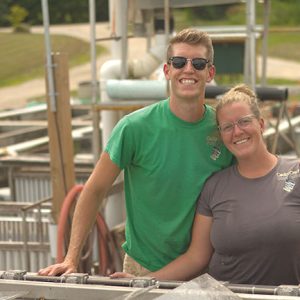 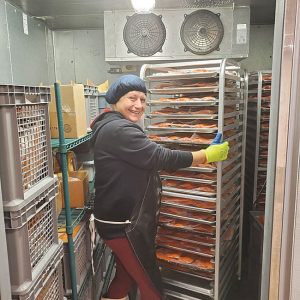 Cedar Crest’s small processing facility allows the team to clean and package all fish by hand.

Expanding markets
To substantially grow their processed fish sales, Cedar Crest needed to bring Springhills Fish to larger markets. Starting with the closest cities, such as London, and Kitchener/Waterloo, Springhills Fish began to advertise in large urban markets through social media. “By offering monthly deliveries and a subscription service we have managed to grow quite well in local cities. We soon started deliveries to cities even further off like Hamilton and into Toronto.” All told, Springhills Fish deliveries are now made to more than 1,500 homes per month.

Connecting farmers with consumers
One of the unexpected benefits for the farmer of selling direct is connecting and talking directly with the consumer. Most producers operate two or more steps removed from the final consumer, creating a disconnect. Aquaculture associations and corporations try with great difficulty to engage the public and raise awareness of aquaculture in general. “In terms of raising awareness about aquaculture, our direct sales have turned into a fabulous messaging system for the industry.” Customers are often excited to see their local fish farmer at their door and interested in information about their fish. Where was it grown? What was it fed? What is fish feed made of? Do you use antibiotics? “It means a lot to customers to hear facts from the farmer who is standing in front of you.”

Indeed, the entire team at Cedar Crest find themselves answering many questions and providing information the aquaculture industry has made public but had trouble communicating to consumers for years. The direct relationship between farmer and customer is something customers increasingly desire. “We can convey to our customers that we are environmentally responsible, we are advocates for fish welfare, that our fish are happy and healthy because of it, and that aquaculture is the right thing to do. Our fish are 100 per cent traceable and anyone is welcome to visit them at the farm and see the fish for themselves. People really appreciate that.”

Going forward
“This pandemic has been going on so long that we’ve seen some lasting changes to consumer behaviour. They want more local options and are much more curious about where their food comes from. They’ve also had more time cooking at home and they’re more willing to try home delivery,” explained RJ.

The team at Cedar Crest Farms/Springhills Fish will be working hard going forward to expand into more urban markets and offer new products. “We harvested our first batch of in-house raised Coho salmon in January 2022, which was a really exciting moment for us. Many of our customers are asking for salmon.” In a short 18 months, the team at Cedar Crest/Springhills Fish has turned their fortunes from tragedy to triumph, and forged Springhills Fish into a profitable and established brand throughout the region.