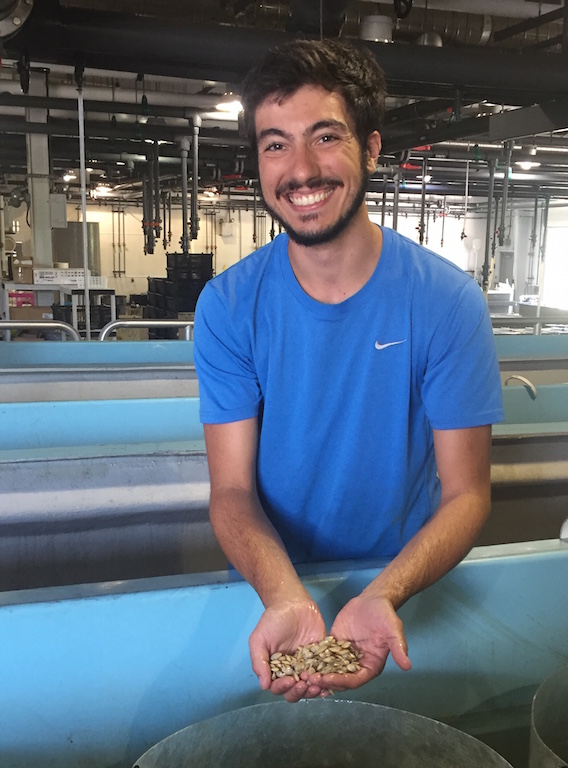 In summer, 2018 Rutgers University’s Haskin Shellfish Research Laboratory (RU-HSRL) is expecting to release its study on cultured Atlantic surfclams (Spisula solidissima), a native species which is said to have “biological characteristics… that make these a strong candidate for exploration as a new farm species” in New Jersey and other Atlantic states.

“We intend to have results to share as we go along, but we should have the program complete by the summer of 2018,” said Dr. Daphne Munroe, project co-principal investigator and RU-HSRL Assistant Professor, Marine and Coastal Sciences.

One of the focuses of the Feasibility of Atlantic Surfclam Culture in New Jersey is testing various strategies for hatchery culture conditions and nursery gear.

“The surfclam hatchery culture is pretty well-established and we aren’t trying to reinvent anything in hatchery phases,” Munroe said. “We have tested different temperature and feeding regimes for the nursery, and have upcoming experiments where we will compare the growth of juveniles in raceway nursery systems to those in upwelling systems.”

hatchery and nursery phases of the project. She added that, “A pilot program that we ran a couple of years ago in partnership with local industry demonstrated good growth and survival on a local farm as well. Even through a relatively cold and icy winter, the clams did well. Surfclams are relatively easy to work with in the nursery and hatchery. We have followed standard practices with husbandry and the results have been good.”

While there is interest in surfclams, the demand is low because no one is growing it commercially in New Jersey, she explained. Currently, RU-HSRL is the only one producing surfclam seed in the state and these are only for the experiments.

Asked if the RU-HSRL -produced seeds would be commercially available, Munroe said, “Not at this time, but possibly in the future if growers are interested.” There are a few clam hatcheries in the state that would likely produce the seed in the future if demand were there.

Working with Munroe on this project are RU-HSRL Shellfish Aquaculture Extension Specialist Lisa Calvo as the project co-principal investigator and RU-HSRL graduate student, Michael Acquafredda, whose graduate studies will, in part, focus on experiments associated with this project.