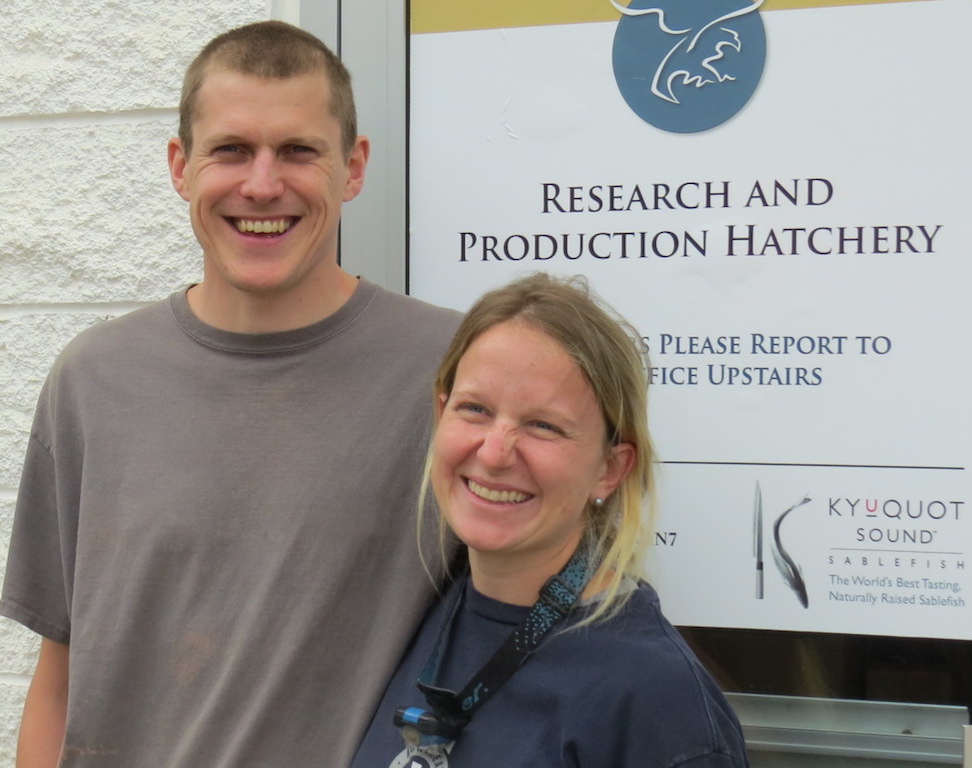 Tom and Megan Sorby The world’s only major commercial sablefish hatchery has experienced a roller-coaster ride of production successes and failures since its inception in 2003. But this year it looks as if things are turning around for BC-based Golden Eagle Sablefish.

However, it hasn’t been easy. In some past years the facility’s 12 larval rearing tanks ended up virtually empty, but this year it has exceeded its goal of 200,000 fingerlings and is aiming to continue expanding capacity to 500,000 20 gram fish within the next few years.

“And it could continue to grow beyond that in the future,” says co-hatchery manager Megan Sorby.

The market price for a 20-gram fingerling is in the neighbourhood of $4 a piece, but so far the growout side of Golden Eagle takes all they can grow and there’s nothing available for outside buyers.

The biggest challenge says other co-hatchery manager Tom Sorby is consistency. “We need consistent larval survival of 20% or more.”

There are still several unknowns when it comes to finding this consistency. Both Tom and Megan agree that nutrition at multiple life stages and improved understanding of genetic selection within the species are two key factors.

“With a better understanding of what the broodstock nutritionally need to produce quality eggs and what the larvae need in their diet to enhance growth and development, we will continue to make significant strides in survival,” says Tom.

The hatchery uses feeds from various sources, but mostly from Biomar, Ewos and Skretting. They would like better access to squid meal, what the fish “love,” but access to the preferred product which comes from Asia is limited owing to government permitting issues.

Currently under development is a new broodstock facility which is being built within an existing building at the site. It will utilize RAS technology which Megan says will give them much more flexibility. “We will have much more control,” she says. “We will have more tanks, better temperature manipulation and improved photoperiod control.”

Once the fish are large enough to leave the hatchery they go on an eight-hour truck ride to sea sites which are at the far end of Vancouver Island. They travel in a custom-designed transport truck which was used for up to eight transports last year.

Once at the sea sites the sablefish grow quickly to about 1200 grams then typically plateau for a while. There has been some trials using all-female stock to overcome this problem and early resutls are promising. Most of the adult fish are destined for Japan where they enter the market as premium sushi grade product.

The hatchery has had a rocky history. Launched as Sablefin Hatcheries Inc. in 2003 it promised a fresh start for the west coast aquaculture industry and diversification from the controversial salmon farming sector.

For founding manager Gidon Minkoff the genesis of the project began in the late 1990s when he worked at pilot-scale sableﬁsh hatcheries at Qualicum, BC and DFO’s Paciﬁc Biological Station in Nanaimo.

Through trial and error and just plain dumb luck researchers at both facilities gradually developed the technology to successfully rear these ﬁnicky ﬁsh from egg to market size ﬁsh. However, it wasn’t until 2002 with ﬁnancing from a number of BC-based investors that Minkoff had the $2.8 million he needed to get the commercial scale project underway.

Construction of the original buildings began in the fall of 2002 and the 12,000 square foot facility took in its ﬁrst broodstock a year later in October, 2003. The ﬁrst spawning took place in 2004 with 25,000 marketable juveniles. The eventual goal was to scale up to half a million and ultimately two million farm-ready juveniles. But there were production problems, a change of management and eventually a bankruptcy which led to a change of ownership in 2014 when the Aquilini Investment Group, based in Vancouver, took over.

Shortly after that Megan and her husband, Tom, were hired to run the hatchery.

Prior to working with Golden Eagle Megan and Tom managed an experimental sablefish program with Troutlodge in Washington state. When the trial program came to an end they were hired by Golden Eagle’s manager, Terry Brooks, to manage the Salt Spring facility.

Since their arrival the focus has been getting production numbers up to sustainable levels, and things have really progressed.

“We are also constructing the new systems for our broodstock.” says Megan, “and moving forward with a lot of research and development on the sablefish. We have a great team out here as well, some of whom have been working in aquaculture in BC for quite some time, particularly with the sablefish.”

In addition to Megan and Tom, key members of the sablefish hatchery team are Dr. Briony Campbell, whose efforts in managing the broodstock program for many years has allowed for the recent successes to be possible, and Matt Stone, who has aided in the management and advancement of the live feeds and larval nutrition development.

“It’s difficult to identify key members of our team as we must attribute this success to everyone’s extreme hard work and effort at both the hatchery and the sea sites,” says Megan. “Without even one of them, these fish wouldn’t be doing as well as they are.”