The large-scale production of farmed fish along the Norwegian coastline results in large amounts of sludge each year. The sludge is a mixture of fish feed and faeces. Non-removal of the sludge can lead to toxic algal blooms and poor water quality for the fish. But the sludge also contains chemicals such as phosphorus, which can be used in fertilizer production for land-based farming, and can be converted into biogas for use at land-based hatcheries. 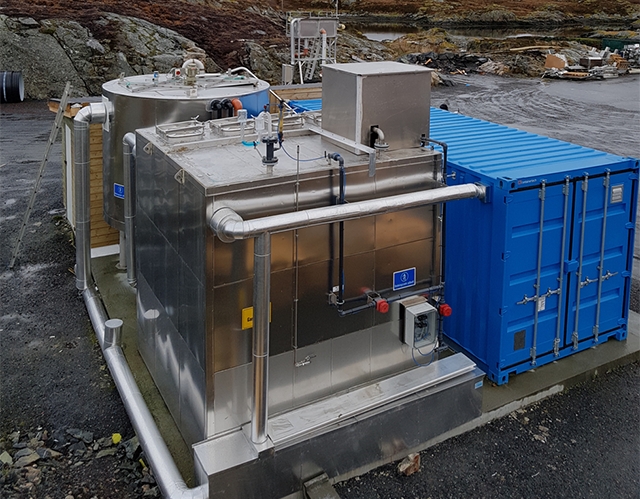 Through a collaborative development project, Sterner AS and Smøla Klekkeri and Settefiskanlegg AS have been developing new biogas technology to reduce sludge emissions by 50%. This would provide easier collection of the sludge with the aim of producing biogas without the need for additives. The project has received financial support from Innovation Norway.

One of the challenges they faced was the high nitrogen content of the sludge, which led to the formation of ammonia. This can be toxic to the bacteria working inside the reactor. Another problem was that if seawater enters the biogas reactor, this could result in sulphur or H2S, which are also toxic.

The solution is reported to be cost-effective, compact and easy to operate. Effluent enters the reactor and the resulting outputs are biogas and a dry matter granule. The biogas can be used for subsequent heating of the water in hatchery facilities, replacing oil or electricity, and contributing to the government’s low-emission targets.

The biogas plant is ready for commercialization and can be delivered in several different sizes. The first commercial plant is being built for Cermaq’s hatchery at Forsan in Steigen in Nordland where the production of salmon smolts generates approximately 160 tonnes of sludge annually. The biogas plant is based on a combination of Sterner’s ABR (anaerobic biological process to produce biogas) and MAT (drying) technology.