The Abegweit First Nation is a small Mi’kmaq band that was established in 1972. It comprises three small, separate reserves (Morell, Rocky Point, and Scotchfort) in eastern Prince Edward Island, Canada, The Abegweit band separated from the somewhat larger and relatively distant Lennox Island First Nation in order to have greater autonomy. 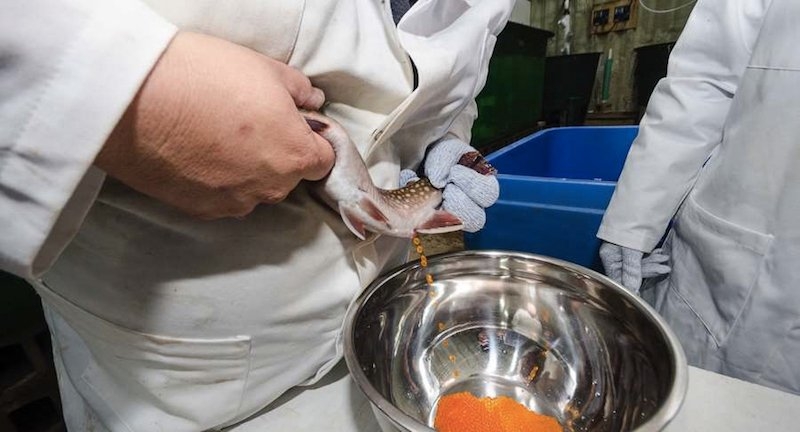 Native people have lived on Prince Edward Island for upwards of thirteen thousand years, and their modern descendants maintain their ancient tradition of respect for and protection of the Island’s natural resources for current and future generations. Band members take great pride in their community and involve “our youth, our harvesters, our elders, and our leadership.”

Some five years ago the Prince Edward Island Department of Agriculture and Forestry called for expressions of interest in producing native brook trout (Salvelinus fontinalis) and Atlantic salmon (Salmo salar) for restocking Island streams. The Abegweit First Nation responded and reached an agreement with the province for the production of fish for recreational restocking efforts. A hatchery was built on the Scotchfort reserve in 2012, and has been producing fish successfully ever since. The hatchery supports and collaborates with a number of successful programs beyond recreational fishing on PEI (which generates approximately $10 million annually), and First Nation treaty rites for ceremonial purposes.

The main hatchery building is of a metal “Quonset” design and measures roughly 60 x 30 ft. (18.2 x 36.4m). It was assembled on site by First Nation members. At present the building holds four 10 ft (3.0m) fiberglass Swede tanks (square but with rounded corners — made by Duratech in Nova Scotia); two 7ft (2.1m) and three 4ft (1.2m) circulars. These will be augmented by four more 10ft Swede tanks located outdoors in the near future.

Eggs are incubated in Heath trays, (10,000 per tray) and there is sufficient capacity to meet existing contract agreements, with considerable space to spare for other programs. Current contracts call for 10,000 brook trout for release each fall as 5-6g juveniles in each of four streams, 4000 “derby” fish for public fishing events that are held from time to time at different locations on the Island, and a minimum of 50,000 salmon for release as first-feeding fry in a number of island streams.

Water is drawn from two wells on the property and only requires de-gassing using a cascade system to strip nitrogen (to avoid gas-bubble disease) and add oxygen prior to use. Maximum sustainable flow is estimated at 650 l/min, but current demand is more in the order of 200 l/min. Incoming water temperature remains more or less constant at 8–8.5°C year-round. For salmon production, the water is cooled to 2°C which is more representative of spring-time conditions.

The current system is “flow-through”, but plans are in place to convert to recirculation prior to broodstock collection later in 2017. This will allow the effluent to be redirected to an aquaponics greenhouse for the future production of vegetables for local consumption, and traditional medicinal herbs. The water stripped of its nutrient content by the plants will be returned to the fish tanks.

Broodstock are collected from river systems around the Island in late October, brought to the hatchery for spawning, then released back to their respective rivers. There is no attempt to use hormones to synchronize spawning since experience has shown the optimum time to collect fish from the different streams. Progeny are released to their parental rivers: salmon are released as first feeding fry in the spring; trout are released in the fall at a size of 5-6g.

The hatchery is designed with energy conservation in mind. Piezo-electric solar panels are mounted on the roof, and the electricity generated (up to 9 kW) satisfies about 30% of the overall demand. Tanks are illuminated with supplemental LED lighting following a natural daylight regime. The focus is on producing high quality fish rather than on large numbers.

The Abegweit Biodiversity Enhancement Hatchery, to give it its full title, is one of three initiatives of the Abegweit Conservation Society. Related Society initiatives are the Abegweit stream enhancement,  and forestry programs. Over the past 10 years the stream enhancement program has pursued a number of initiatives such as the removal of beaver dams, shoreline clean-up, in-stream improvements to increase water flow and lower summertime water temperatures, besides collaborating with the collection of broodstock and the release of fish back into their native streams. This has included collaboration with a number of dedicated conservation groups for work on individual streams and rivers, including research and monitoring for evaluating stream habitat improvement activities and the effects of climate change.

The hatchery coordinates the PEI Fish Friends Program, an educational program originally developed by the Atlantic Salmon Federation. The ABEH provides aquariums for a number of schools across the island that are maintained by teachers and their students. Each school receives 150 eyed salmon eggs that are first incubated in the hatchery, and the hatchlings fed and cared for and later released by the students into local streams, usually in June when water temperatures are rising and the kids are still in school. Students are encouraged to learn about the fish and appreciate their sensitivity to environment degradation, poaching and habitat destruction, and the importance of recreational fisheries to society. Eight Island schools participated in 2014; 12 in 2015; and 17 in 2016, so the program is clearly popular.

I am indebted to Hatchery Manager Scott Taylor for his collaboration in the preparation of this profile and for sourcing the photographs, and to Roger and Rebecca Hersom-Petersen for correcting some of the details. For more information contact Scott at: cstaylor@abegweit.ca.

One recent and exciting development has been the discovery of a unique Atlantic salmon population that may contain genes of the original PEI populations. A salmon DNA study conducted by Laval University in Quebec, analyzed 9,142 tissue samples from Atlantic salmon collected at 149 sampling locations in the eastern United States and Canada in 2012, including five rivers in PEI. The preliminary results revealed that while Atlantic salmon populations in the eastern Atlantic region could be grouped into 29 regional strains there are Atlantic salmon from two eastern PEI Rivers, North Lake Creek and Cross Creek, that displayed a separate DNA marker cluster and could be considered “unique”. The Conservation Society has initiated a project called the “PEI Genetically Distinct Salmon Population Evaluation, Habitat Assessment, Rehabilitation and Conservation Project” and has been granted $44,000 in funding from the Atlantic Salmon Conservation Foundation over the past two years for further study.

The project’s goal is to monitor these genetically distinct populations and develop strategies for their appropriate management, protection and conservation.