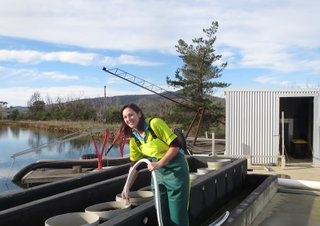 The Cameron hatchery is now a major supplier of Pacific oyster spat to Tasmanian – and mainland growers along the eastern seaboard and in South Australia (SA). It is a fully integrated operation and is renowned for its advanced spat and high quality live oysters.

Hit hard by the 2013 Tasmanian bushfires, they are now rebuilding their stocks after devastation caused by the Pacific Oyster Mortality Syndrome (POMS) virus.

Ellen Cameron is the granddaughter of the dynasty’s founder, Ian Cameron. She manages the company’s nursery sectors and is involved with the hatchery program, which is managed by her uncle, Graeme Cameron.

“The POMS outbreak has had a dramatic impact on the Australian Pacific oyster industry.” she said. “Although the South Australian industry hasn’t been affected directly, it relies on Tasmania for its seedstock. We supply around 70% of their spat. Now that we’re quarantined here in Tassie, the South Australia growers rely on the output of two small local hatcheries. We’ve been spending a bit of time with them; the industry over there will be wiped out if we can’t help them ramp up production in a short time frame. We have established a new hatchery in South Australia, out of Point Boston, in partnership with Yumbah Aquaculture.”

The Dunalley facility is divided into three sections. The first two —hatchery and crèche — are indoors and linked to a re-circulating system. Water is pumped ashore, filtered through sand – and 1 micron filters, fractionated then passed through a UV irradiation system. The nursery is set up with concrete raceways and fed through an upwelling water system from fertilized algae production ponds. A duplicated system, twice the size, has been established at the company’s Newman’s Creek property.

Once the oysters selected for the breeding program have been conditioned, the water temperature is raised to 20°C and the female gametes are drawn off with a pipette and mixed with the genetic material from the males. After 14 days the larvae show signs of settling and undergo a treatment process developed at the hatchery, which ensures the larvae metamorphose in the water column instead of looking for something to attach to, and minimises deformities. The spat are then grown out in the quarantined crèche until they reach approximately 2mm, at which point they are transferred to the on-growing nursery raceways located besides the algae production ponds.

The quarantined nursery system enables the company to grow the spat out to 8-12mm. While this may take 12-18 months, it gives their customers an advanced and hardier seedstock, and reduces the time on the open water leases to 12-18 months.

During the warmer months, the spat in the nursery raceways are handled every second day to trim any loose edges, keep their shape uniform and harden them up. Ellen said that if oysters put on shell too quickly, they get fragile and can’t handle the shock of transfer to the leases. During the winter, when the oysters are slower growing and less robust, handling is reduced to once a week, or less, depending on the severity of the conditions.

In the hatchery and the crèche, the larvae and spat are fed a cultivated diet using only selected algal species. In the nursery, food comes from the adjoining algal ponds, the species make-up of which is determined by manipulating the fertilizer regimes fed to them.

The Camerons have been producing a single cell oyster for the last four years. Triploid oysters don’t appear to have a measurable growth advantage over diploid stock, but because they don’t spawn during the warmer months, they are in prime condition during the crucial summer seafood marketing period.

With the climate controlled hatchery/crèche capability, spawning can be carried out to suit the client’s stocking needs, which fall into two periods: in late summer/early autumn, when the water is still warm enough to get some growth before winter; and when the water starts to warm up in the spring.

Broodstock have always been selected for particular traits: low mortality, high meat-to-shell ratio, and even shell size and shape. Post POMS, broodstock selection has incorporated lines that have shown the most POMS resistance. Broodstock is selected from the survivors that, when fully challenged, have proven their immunity.

“On the Blackmans Bay leases, out of 6.5 million oysters, we lost 5.8 million,” Ellen said. “There was a clear age correlation. Stock older than 12 months did a lot better. Survivability ranged from 50 to 70%. Those survivors gave us a base for future spawning lines.”

With broodstock bred for POMS-resistance coming from Australian Seafood Industries, and a lot of industry input, the Camerons see a good chance they’ll be on top of the situation within a couple of seasons. However, Ellen was cautious: “Very mixed results so far, still too early to see much change in genetic resistance.”

As this is the only land-based hatchery/crèche in Australia, Hatchery International asked if — due to the vulnerability of open–water farming to the threats from POMS — flow through systems were an option for the industry, Ellen said the issue was cost. “It’s okay for hatcheries and crèches, but to feed larger animals the cost becomes prohibitive. As they double in size their food requirement can more than triple. With a three year lead time for a return, it’s just not economical.”

“That’s why our breeding program is so crucial to the survival of the industry,” said Ellen.

0737 The water conditioning tanks at the hatchery. The heads of the foam fractionators can be seen above the tanks.

0064 The raceway trays full of oyster spat during their daily ‘inter-tidal’ dry out period.

0066 The flow across the oysters is continuous; tides are simulated by having dry out periods where the raceways are emptied of water completely for a few hours every day.

0743 The daily wash down —oysters are washed every day to clean out the holding tanks, and to give the growing oysters a bit of a ‘stir’. The plankton pond and pumping system are in the background.

0751 The sand- and bag filters that ensure the hatchery water is as free of organics in suspension as is mechanically possible.

0736 Ellen Cameron keeping tabs on things. The photo behind her is of her late father Michael, who was Managing Director and played a major part in the development of both the Company and the Tasmanian oyster industry.