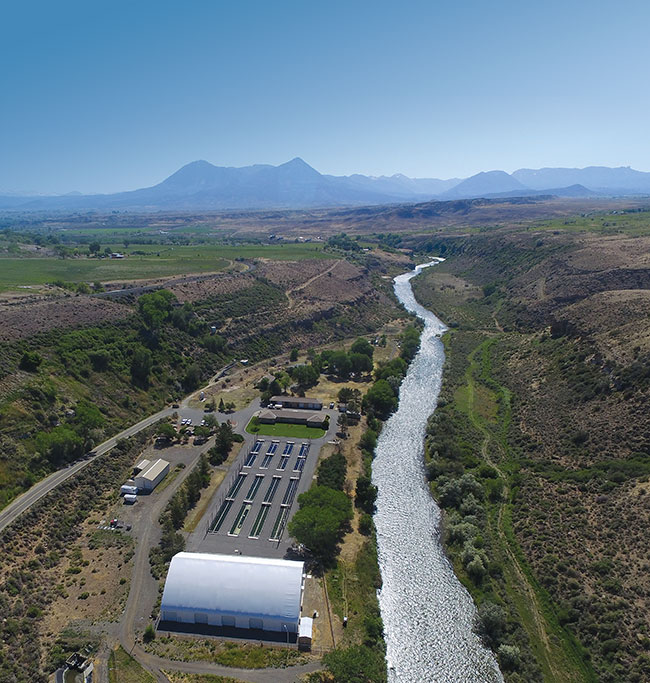 Colorado’s Hotchkiss National Fish Hatchery (Hotchkiss NFH) began its first full year of production as a mitigation hatchery in 1970, and the need was overdue.

“The Upper Colorado River Storage Project Act of 1956 has had a significant impact on the development and management of water in the Upper Colorado River Basin (Colorado, New Mexico, Utah, and Wyoming) with the creation of built reservoirs,” said Hotchkiss project manager, Craig Eaton. “When dams were built and filled, it covered acres of wildlife habitat. To help mitigate for the loss of wildlife habitat, the Department of Interior built Hotchkiss NFH for stocking fish in some of these reservoirs.”

The hatchery is operated by the U.S. Fish and Wildlife Service (USFWS), built under the provisions of Section 8 of the Colorado River Storage Act, water development project. The facility includes 24 inside nursery tanks, 40 concrete raceways and two earthen ponds for treatment and sedimentation.

Other hatcheries in Colorado are part of Colorado Parks and Wildlife.

“Hotchkiss’ most important mission is rearing and stocking of mitigation recreational trout in federal reservoirs for the Bureau of Reclamation and the U.S. Fish and Wildlife Service (USFWS),” Eaton continued. “We also meet our Tribal Trust responsibilities by stocking the Southern Ute Indian Tribe with trout.”

Explaining the restoration of aquatic populations and how this process benefits tribes, can be complicated.

Disease is the dark cloud that never seems to go away. 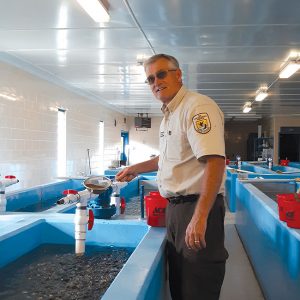 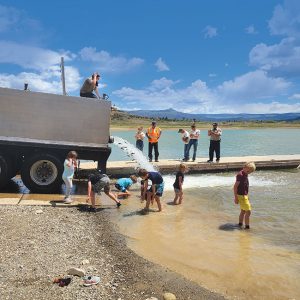 If there is fish in a hatchery then disease management is always an ongoing problem, Eaton said. With the North Fork of the Gunnison River being a stone’s throw away from the main outside fish rearing raceways of Hotchkiss NFH, there are current and potential problems that occur and can occur, sometimes seasonally.

The decline of wild fish populations is also a looming concern.

“The decline is the reason fish hatcheries exist,” he said. “I believe that without fish hatcheries there wouldn’t be any recreational fishing, except on private lands. Hatcheries can help in rearing and rebuilding native populations, and stocking fish into areas where the public frequents can lessen fishing pressure on the wild fish, while allowing the public to catch stocked fish.”

There are four unique fish species that can only be found in the Colorado River system: Colorado Pikeminnow, Humpback Chub, Razorback Sucker, and the Bonytail.

“Our hatchery here in Grand Junction, is called the Ouray National Fish Hatchery – Grand Valley Unit,” said Ryden. “It is a small hatchery that grows only endangered fish. Currently we have two endangered fish species on-station (Razorback Sucker, Xyrauchen texanus; and Bonytail, Gila elegans) that we culture and stock back into the wild.”

The entire reason for this hatchery’s existence is to help recover populations of these endangered Colorado River fish species and its tributaries. The hatchery stocks these species into the Colorado, Gunnison, and San Juan rivers in support of recovery efforts.

All of the work is funded through, and overseen by, two endangered fish recovery programs: the Upper Colorado River Endangered Fish Recovery Program (UCREFRP), and the San Juan River Basin Recovery Implementation Program (SJRBRIP). Both of recovery programs are made up of numerous partner entities that range from federal, state, and tribal resource agencies to water user and environmental groups.

According to Eaton, there is a long list of challenges facing the 70 federal fish hatcheries.

Through U.S. Congress, the USFWS headquarters determines what the priorities are for the current controlling administration. The following are the top priorities of the National Fish Hatchery System, the funding comes from Bureau of Reclamation and from U.S. Fish and Wildlife Service, both agencies under the Department of Interior.

1. Recovery of aquatic species federally listed as threatened or endangered.

a. Native species propagation that fulfills mitigation obligations of other federal agencies and for which the USFWS is fully reimbursed by the mitigation agency.

b. Native species propagation that fulfills mitigation obligations of other federal agencies and for which the USFWS
is not fully reimbursed by the mitigation agency.

c. Native species propagation that is not for mitigation purposes but for which the USFWS is fully reimbursed.

d. Native species propagation that is not for mitigation purposes and for which the USFWS is not fully reimbursed.

a. Non-native species propagation that fulfills mitigation obligations of other federal agencies and for which the USFWS is fully reimbursed by the mitigation agency.

b. Non-native species propagation that fulfills mitigation obligations of other federal agencies and for which the USFWS is not fully reimbursed by the mitigation agency.

c. Non-native species propagation that is not for mitigation purposes and for which the USFWS is fully reimbursed.

d. Non-native species propagation that is not for mitigation purposes and for which the USFWS is not fully reimbursed.

Reflecting on the past and looking toward the future, Eaton has a message:

“My wish for the future is that there will be fish caught by young kids, which will inspire them to become fish biologists, aquaculturists, and hatchery managers, to perpetuate fish for future generations.”