TRC Hydraulics Inc., based in New Brunswick, Canada, has served the forestry, marine, agriculture and aquaculture sectors since 1986. Notably, since the 1990s the company has sold a 2.77 liter triploid production unit called the TRC-APV-M, or Aqua Pressure Vessel. Recently, the company unveiled the TRC-APV-6.0, a six-liter version of the device designed to handle higher volumes of production. 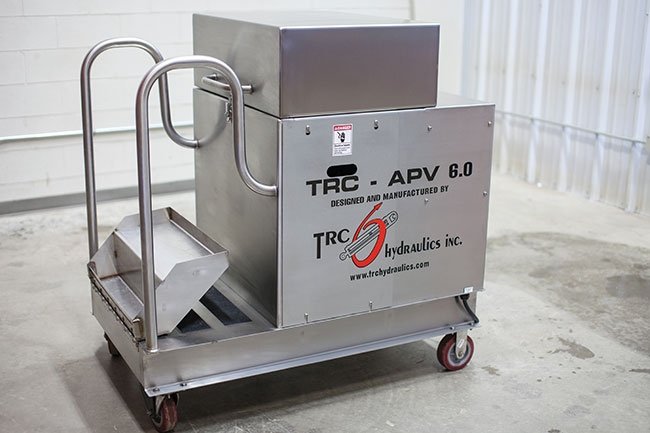 “We’ve been selling the 2.77 liter chamber for 30 years, and we have requests from customers throughout the world for a larger capacity unit for the hatchery environment,” says TRC Hydraulics general manager Jason Levesque. “Our smaller units are mobile, so they can take them to the riverside or to the brookside, depending on what species of fish they’re triploiding. They both have their specific places. Some people want to take them right to the riverside, and some of them want them to stay on the hatchery floors.”

TRC Hydraulics machinist Mike Grey, who has been building the units from the start, says that the larger unit may actually be easier to operate than the smaller version. It has been modified to be more user-friendly and requires very little to no maintenance.

“There’ve been customers that do close to a million eggs in one day with these units,” says TRC Hydraulics machinist Mike Grey. “That’d be a big day, of course, but it’s been known to happen.”

The original version of the APV was developed over a long period of trial and error, in collaboration with the University of New Brunswick, to develop the exact formulas required. The new high volume model is largely an upscaled version of the original, so it only took a year for research and development. One significant change is that while the smaller versions had lids that can easily be lifted manually, the larger model has nearly 50 lb. lids, so they come with a hydraulic system to lift the lid.

The APV 6.0 was developed in collaboration with Craig Schaugaard, fish culture coordinator for the Utah Division of Wildlife Resources. Schaugaard says he had previously used heat-shocking methods to triploid their eggs before purchasing two of the smaller units. They worked well, but the volume was off.

“In our hatcheries, we take such a large amount of eggs that we would keep our spawners busy and the pressure chambers going. We would have probably had to have four or five of the smaller chambers going,” says Schaugaard. “That would have also led us to have more people help in the pressure treating process because you’ve got to monitor that timing.”

Schaugaard called TRC and asked if they had a larger model. When they replied that they didn’t, he asked if they’d consider making one for him.

“I guess they had been thinking about it and had been approached before, but I guess I was the magic trigger that they decided it was worth it to go into and engineer for us,” says Schaugaard. “I was very glad they did it, because now we can keep our spawners busy, and they’re not backed up on the pressure chamber, and the pressure chamber is now able to do large enough loads that we can just keep moving forward.”

Schaugaard says they’ve been using the APV-6.0 units for around a year now and he has seen very positive returns. Since their previous APV-M units have been working fine for more than eight years, he anticipates getting many more years out of the 6.0 units they purchased. One hatchery had some low triploid results, but Schaugaard attributes that to not using the proper recipe. Since working that out, another hatchery under his purview has consistently seen 98 to 100 per cent success rates. TRC has also been very good to work with, he adds.

“The relationship has been good,” says Schaugaard. “They’ve been very friendly and very good to work with. I’m very happy with it so far.”