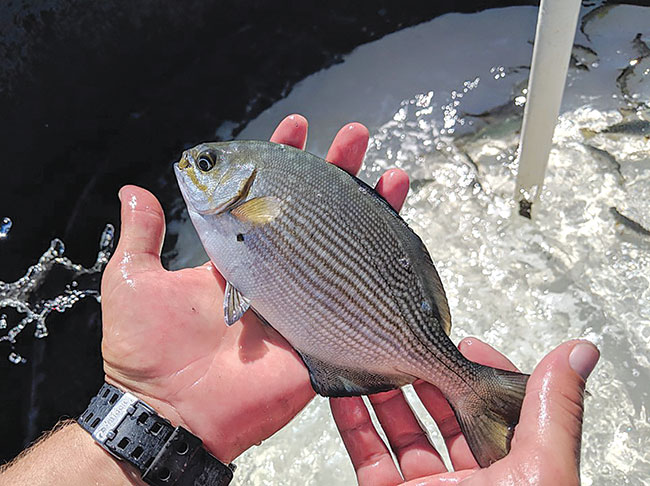 Ocean Era plans to expand its R&D to other marine finfish, such as this 'nenue' (Kyphosus vaigiensis), cultured at the firm's hatchery at NELHA in Kona, Hawaii. (Credit: Ocean Era, LLC)

As Hawaii’s aquaculture industry continues to accelerate, its major players are focusing resources on research and developing protocols for selective breeding, larval production and feed formulations – all to support the growing trend toward offshore mariculture.

One company, Ocean Era LLC, is investing in a next-gen research facility that will boost the Aloha State’s ambitions to become a center of excellence in offshore mariculture.

“If we are going to grow offshore aquaculture so we can feed nine billion people and to be able to move away from reliance on marine animal proteins, we need to be able to do this in a way that is scalable,” says Neil Anthony Sims.

Ocean Era is the new name for the company formerly known as Kampachi Farms LLC, a research company in Kona, Hawaii, established over 10 years ago by Sims and Michael Bullock. The company was a spin-off from Kona Blue Water Farms, which had been instrumental in developing Hawaiian kampachi (Seriola rivoliana) as a new aquaculture species back in 2004 to 2009.

Ocean Era is working to advance research and guidance in support of offshore aquaculture, a nascent but promising sector which offers the “largest potential gains for food production,” according to a new scientific paper called, “The Future of Food from the Sea.”

The facility will focus on a range of research projects, including improving kampachi diet formulations, selective breeding, cultivation of herbivorous reef fish, and offshore farming of algae for food, feed and biofuel use.

But instead of just focusing on research for the expansion of Seriola rivoliana production, the company plans to expand to other marine finfish, “particularly herbivorous marine fish that eat seaweed, and also expand to offshore seaweed production,” Sims told Hatchery International. The “repositioning” of Kampachi Farms and its renaming to Ocean Era will be officially announced at Aquaculture America 2020 in Honolulu in February.

Ocean Era LLC co-founder Neil Anthony Sims says the Hawaiian community’s recognition of the value of mariculture has made the state a pioneer in the sector. (Credit: Ocean Era, LLC)

Tank-cultured Halymenia, ‘sea-grapes’ (Caulerpa) and ‘ogo’ (Gracilaria) grown at the experimental algae culture facility at NELHA, in Kona, Hawaii. Ocean Era LLC is extending its scope of work to include offshore farming of algae for food, feed and biofuels.

“There’s a whole suite of markers that are involved but we’ve identified those that are most significant particularly for accelerated growth on diets that include predominantly soy protein concentrate,” he says.

They will also continue their work on formulating fish feed that reduces reliance on fishmeal and fish oils, which the aforementioned scientific paper has described as key to sustainably expanding finfish and shrimp mariculture.

The team is collaborating with fish physiologist Dr. Rick Barrows and with the organizers of the F3 Fish-Free Challenge, a competition in which contestants are invited to produce aquafeed that does not contain marine-animal meal or oil.

The initiative, funded by the Saltonstall-Kennedy Grant Program, expects to announce in the spring the result of trials on feeds that use a mix of Veramaris oil (an alternative source of Omega-3 derived from marine algae) and a blend of canola oil and other agricultural oils.

“We have had very good results with a pet-grade poultry meal – that’s feed grade, not food grade – combined with a trace mineral mix that replicates the trace minerals out of spirulina. That would be a highly competitive diet for kampachi that would be completely free of any reliance on marine-sourced proteins or oils,” says Sims.

With fishmeal currently priced between $1,600 and $1,800 a tonne, the development of a pet-grade poultry meal (currently priced $1,050 a tonne) will offer farmers a “significantly less expensive but more importantly, a more scalable” nutrition solution, Sims says.

Todd Madsen, president of Blue Ocean Mariculture, based in Kona, Hawaii, lauds the initiatives. He says these efforts will “reduce pressure on constrained forage fishery resources, and make our feeds less expensive.”

“Of course, those goals have to be balanced with the nutritional and growth performance of the feed,” he adds.

Hawaiian success story
Kona-based Blue Ocean Mariculture is the first offshore open-ocean farm in the United States and has been commercially farming kampachi or Almaco jack (Seriola rivoliana) since 2009. The company was the first to establish an integrated hatchery for Hawaiian kampachi, successfully developing and commercializing it as a farmed species.

“Getting the larval production going was a process of learning what the correct protocols were for this particular fish. We had to figure out the nutritional profile for the larval fish, such as the number of days to feed rotifers versus the number of days to feed artemia, for instance. We’ve done that over the past few years through various research and just understanding what’s unique about this fish and this location,” says company president Todd Madsen.

Stabilizing the protocols for larval production has been a game changer for the company.

“They are now more routine, repeatable and simplified. We’ve become more efficient in larval yields and the production of the fish from a cost perspective,” he says.

“We’re probably the largest warm water hatchery in the US,” Madsen continues. “We produce 30 billion rotifers over a 20-day cohort window that we’re operating in. In 2019, we produced over 150 million viable eggs and on the nursery side, we probably put to sea about a million fish.”

The focus now is to scale up the business. This entails adding three “Seastation” cages (each measuring 8,000 cubic meters and housing 130,000 fish) to its current five.

“We should be able to do about 2,000 tonnes a year, but that’s also because we’re doing selective breeding so the fish are growing faster and therefore spending less time in the water. The expansion will complete the currently permitted farm site,” Madsen says.

“I think that in Hawaii there is a deep appreciation of the importance of seafood because it is an island state. But even though it is an island state we are dependent on importing most of our seafood and that is clearly not a model that we want to continue to scale. We want to be able produce more of our own seafood,” he says.

The Natural Energy Laboratory of Hawaii Authority (NELHA), an incubator facility that fosters early stage research and supports them to grow into commercial operations, exemplifies the state’s commitment to the industry, Sims adds.