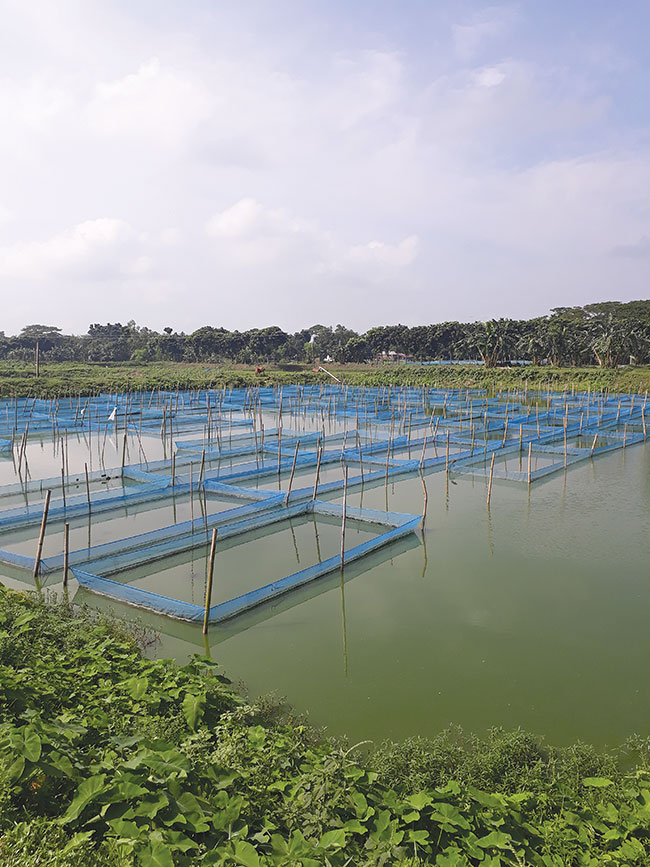 Hapas. Tilapia fingerlings are raised in net hapas before being released into ponds, where they are grown for foodfish size. Photo: Stephanie Horn

Genetically-improved farmed tilapia (GIFT) is tried-and-tested but some farmers in Bangladesh still go for local strains. This practise is seen as potentially holding them back economically. There is, however, the other side of economy talks.

“Our study suggests there may be a greater propensity for better-off farmers to appreciate the potential benefits of improved strains over poorer farmers,” she said. “However, this has not been explicitly shown in our study and further investigations are required to identify barriers to technology adoption for improved farming practices.”

The research project compared key performance indicators for GIFT and non-GIFT tilapia seed and to investigate fish farmer perceptions of GIFT in Bangladesh.

Throughout the early nursing trial, GIFT survival rate was over 88.5 per cent compared to the local strain’s 70.9 per cent. The mean survival rates during the advanced nursing trial were not significantly different. For both trials GIFT had a higher individual weight.

Two strains of tilapia seed were assessed through on-farm trials which compared performance variables of GIFT with a traditional hatchery strain fry during the early nursing and advanced nursing stages of monosex seed production. Production indices and economic performance were investigated.

The authors consistently focused on productivity and said that they had not factored in the reasons that make hatcheries stick to producing local strain fry. Prone to inbreeding, local strains are marked with stunted growth and low value. But demand for this smaller fish has remained strong, especially from people who only have a budget for smaller fish.