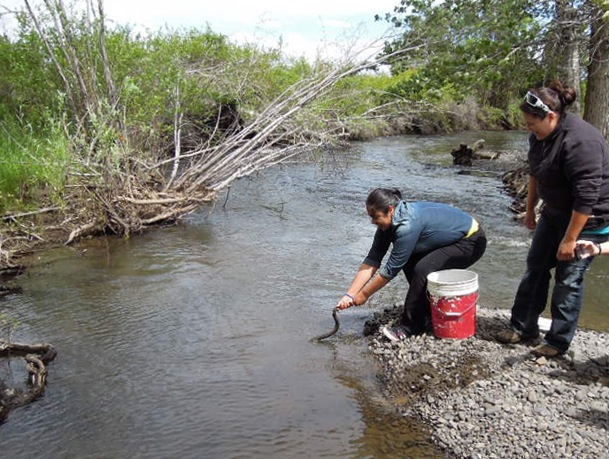 Lampreys are released into Upper Toppenish Creek by members of the Yakama First Nation. US researchers test hatching and early rearing procedures for this native species and cultural icon of the Yakama Nation in the Pacific Northwest.

Many of the northern hemisphere species of lamprey are either threatened, endangered, or extinct, and the Pacific lamprey (Entosphenus tridentatus) is one anadromous species that has experienced a substantial decline in the past 40 to 50 years.

Native Americans of the northwestern USA have caught and used Pacific lamprey for food and as medicine for over 10,000 years, and stories and legends portray lamprey as a crucial cultural icon. The goal of the Yakama Nation (YN) Fisheries Pacific Lamprey Project is to restore natural production of Pacific lamprey to a level that will provide robust species abundance, significant ecological contributions, and meaningful harvest within the YN Ceded Lands, and in the Usual and Accustomed areas.

Because Pacific lamprey in some of the upper Columbia and Snake River tributaries are at alarmingly low numbers, lamprey culture is being explored as a tool to evaluate serious threats and to potentially supplement wild populations.

The recovery of Pacific lamprey populations is expected to take decades, given the severity and magnitude of currently known and probable threats that have been identified by the USFWS “Pacific Lamprey Assessment and Template for Conservation Measures” and other management plans.

Especially in the Upper Columbia Basin, such as the Yakima River, there are a multitude of threats and problems that exist for Pacific lamprey, including but not limited to dam passage, habitat degradation, flow management, water quality (contaminants, etc.), predation by invasive species, and entrainment of juveniles into irrigation diversions and canals.

Very little is known about their juvenile passage and migration, but the diminished number of wild populations and the unique size and shape of the lamprey make any kind of sizeable tagging studies extremely difficult, if not impossible, to implement. Therefore, artificial propagation of Pacific lamprey may be extremely valuable for research purposes to better understand their early life history and biology, and to meet the critical need for samples required for such studies.

The primary research objective is three-fold: 1) to test and compare various methods for the artificial propagation and egg incubation of Pacific lamprey, 2) to evaluate how best to rear and feed larvae with considerations towards appropriate growth and high quality nutrition, and 3) to begin understanding basic staffing, facility and equipment needs to maintain a sufficient number of research organisms over the foreseeable future.

Adult Pacific lampreys were collected from lower Columbia River hydropower dams (Bonneville Dam, the Dalles Dam, and John Day Dam) using specialized tube traps in the summer of 2011. These fish were held over winter at the Prosser Hatchery in circular tanks primarily at ambient river water conditions to stimulate natural sexual maturation processes. No feeding was necessary at this stage as freshwater returning adult lamprey thrive for over a year, and in some occasions several years, on fats and lipids accumulated during their ocean phase.

Artificial propagation was conducted primarily at two Yakama Nation facilities: Marion Drain and Prosser Fish Hatchery. After the adults reached sexual maturity in April – June 2012, eggs and milt were hand-stripped from anaesthetized fish using dry spawning techniques at these two facilities. Eggs were mixed immediately with milt (preferably from several males) and water (approximately 1.5 – 2 times the volume of the eggs), allowed to harden in water for 1.5 ~ 4 minutes, rinsed three times, and housed in various incubation trays.

Over a 10-week period between April 13 and June 19, 2012, 41 adults were propagated successfully. Some of the individuals spawned repeatedly, resulting in a total of 55 propagation events. Over 40% of the adults, however, did not mature in 2012 and overwintered for another year.

The researchers discovered that the success of fertilization and hatching depended chiefly on four variables: 1) seasonality; 2) quality of gametes; 3) water quality; and 4) incubation methods. Early in the season, eggs appeared to be more adhesive and tended to float immediately after fertilization. As a result, we shortened the water hardening time early in the season to prevent excessive egg-to-egg adhesion.

The amount of pressure required to extract the eggs was a good indicator of female ripeness. If excessive strong force was required to drain the eggs, those females were usually less ripe and produced lower quality eggs. On the other hand, if the eggs drained smoothly with hardly any pressure applied (and usually with the production of lots of coelomic fluid), these females were over-ripe and produced much lower quality eggs. At the Marion Drain facility, silt content in well water was higher than at Prosser Fish Hatchery and occasionally plugged up some of the incubator jars, reducing success.

Modified Heath trays proved to be the most successful incubation method overall and also required the least amount of maintenance and space compared to other methods. However, all the other methods proved to be largely successful in incubating fertilized eggs when the other conditions described above (1, 2 and 3) were met adequately. Lamprey eggs are smaller than salmon eggs (approx 1.2mm) so the Heath trays were modified with a 200-400 micron mesh added on the upper tray to prevent egg or prolarvae from escaping, and a 750-900 micron mesh on the bottom tray allowed hatched prolarvae to move to the bottom compartment thus automatically separating themselves from the eggs.

After the hatched larvae had absorbed their yolk and were ready to feed (approximately 15-20 days post-hatch), they were transferred to 4.9 x 0.4m x 0.4m trough tanks at a stocking density of 10,000 – 25,000 larvae per tank, and fed one of four types of feeds at a rate of 30g/week: hatchfry encapsulon; artificial plankton (egg/yolk powder, fish/shrimp meal); Spirulina (blue-green microalgae with vitamins); and active dry yeast.

In natural conditions, larval lamprey burrow into fine sediments, but to monitor them closely we reared them without any substrate. Larvae that were fed hatchfry encapsulon and secondarily active dry yeast had better growth and higher survival rates than larvae fed with the other feeds.

Four types of natural and artificial substrate are currently being evaluated to house larvae for long-term rearing, which are: 1) clay/silt (<63 microns), 2) fine sand (63 to 700 microns), 3) straw (from straw bales), and 4) filter media (polyester, coconut fiber, nylon, etc.) with variously sized interstitial spaces. So far we have found that larvae showed clear preference for natural substrates (1, 2, and 3). However, considering the enormous difficulty in separating larvae from clay/silt and straw, we recommend using fine sand for rearing larvae.

Although there are many similarities between salmon and lamprey culture, the unique biological features of lamprey (especially after hatching) require new innovative ideas and methods to improve culture success.