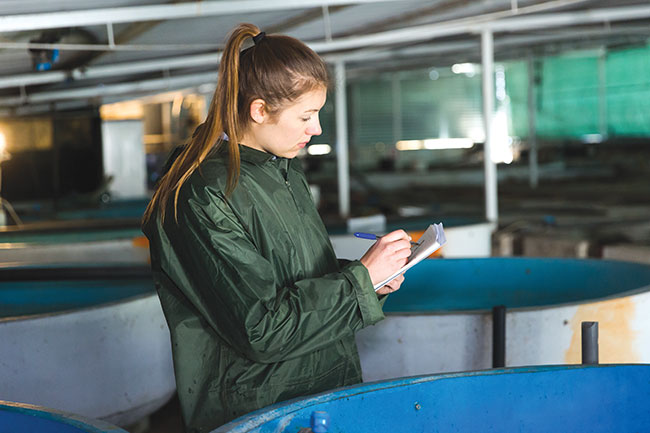 Closed-loop RAS also allows for efficient solid waste capture and collection. However, the intensive nature of the process also results in the production of a concentrated waste stream, with waste treatment and disposal leading to additional costs for farmers. Farmers may also have to bear disposal costs of offal or other byproducts from harvesting and fillet processing. In addition, fish mortalities, which can range from 6.6 to 9.5 percent for salmonid strains (Davidson et al., 2016), also create disposal challenges. The utilization of waste as a valuable resource can be an effective way to increase the sustainability of aquaculture facilities and promote a circular economy.

Anaerobic digestion
A promising and attractive approach to the management of RAS waste solids is anaerobic digestion (Figure 1). Through a biological process occurring in the absence of oxygen, microorganisms degrade organic matter from waste, producing a mixture of methane and carbon dioxide (CO2), also known as biogas. The energy content of methane can be used to run boilers or generators for heat and electricity production. Anaerobic digestion systems operated on terrestrial livestock farms and at wastewater treatment plants produce energy to partially or completely meet the energy demands of the facilities. Additionally, anaerobic digestion reduces volatile solids or organic matter content of the waste stream while producing a nutrient-rich effluent that can be used as a fertilizer.

The energy production from anaerobic digestion can be further enhanced by adding additional organic matter, such as food waste, with dairy/swine manure or wastewater sludge in a process known as co-digestion. Some studies have reported a 26-fold increase in methane content via co-digestion (Lisboa and Lansing, 2013). Dairy farmers have also reported increased revenue from “tipping fees” for accepting the food waste. Co-digestion in an anaerobic digestion system could be an effective way to dispose of offal and fish mortalities in addition to managing RAS waste solids. The electrical energy produced could be used on-site for RAS operations and the heat energy could be used to maintain the digester temperature at 35°C to 38°C. The solid fraction of the nutrient-rich effluent could be composted while the liquid fraction could be used as a fertilizer for a hydroponics operation.

Successfully migrating anaerobic digestion technology to manage aquaculture solids will require waste characterization to understand its effect on digestion stability. Solid waste from RAS mainly consists of fecal matter, wasted feed, and biofloc that forms during the culturing process. However, solid waste composition can vary significantly between facilities due to the feed type, site-specific culture, and feeding practices. Factors such as alkalinity, ammonia concentration, long chain fatty acid content, carbon (C)/nitrogen (N) ratio, organic loading rate, pH, and volatile fatty acid content need careful evaluation since these parameters control the stability of the entire process. For example, aquaculture waste solids have a C/N ratio that is below the optimal range for the anaerobic digestion process and can have a detrimental effect on methane production, thereby reducing the energy content of the biogas. Co-digestion of other organic substrates with a high C/N ratio with aquaculture solids may be an effective way to enhance the methane production and improve energy generation by balancing the C/N ratio and increasing the volatile solids content.

Figure 1. Utilization of fish wastewater solids, mortalities and offal in a digester that can produce energy to be reused for RAS operations. The remaining solid matter in the effluent can be composted, while the liquid fraction may be used as a fertilizer for a hydroponics system.

Cost analysis
One of the primary hurdles to the implementation of anaerobic digestion technology in the dairy and swine industry has been high capital costs. The capital costs of anaerobic digestion systems vary significantly depending on the size and design of the digester, construction materials used, additional equipment (such as combined heat and power generators), and the overall complexity of the system (Gooch, 2006). Capital costs may exceed $1 million for large dairy and swine operations, with operating expenses in the range of 2.4 percent to 7 percent of the capital costs, and a payback period of three to seven years (Nizami et al., 2013). Co-digestion, by combining fish waste solids, mortalities, and offal has the potential to reduce the payback period, therefore, recouping capital expenses faster. Currently, there is no information on expenditures for the adoption of anaerobic digestion technology in the aquaculture industry. However, a previous study demonstrated up to 5 percent of the energy demands of a pilot-scale RAS system growing 1.7 tons of seabream can be met with a bench-scale 20-liter high-rate anaerobic digestion reactor (Tal et al., 2009; Mirzoyan et al., 2010).

The farmed fish industry is growing rapidly, and there is an increasing need to address the problems associated with the management and disposal of the generated waste solids and byproducts from the harvesting process. While anaerobic digestion is considered to be a mature technology and is often used in wastewater treatment plants, dairy and swine industries, digester failure arising from operational knowledge gaps continues to be a problem. Furthermore, there has only been limited research on its utilization with fish waste, and more research is needed before the aquaculture industry can successfully adopt this technology.

The Conservation Fund Freshwater Institute is addressing the challenges of RAS waste management through ongoing research, filling the knowledge gaps required to adopt anaerobic digestion and other waste-to-value technologies in the aquaculture industry.

Christine Lepine is a research associate at The Conservation Fund’s Freshwater Institute.