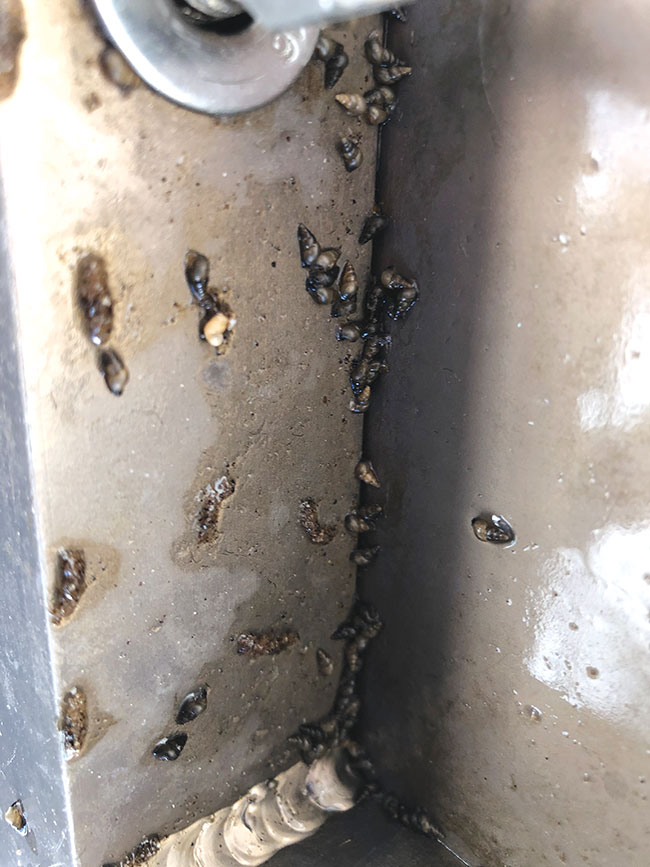 The Montana Fish, Wildlife and Parks said the New Zealand mudsnail (NZM) infestation at one of its hatcheries was likely caused by a drainpipe that connects the hatchery to a creek that’s positive for NZM.

The department first detected the invasive species in August at the Bluewater Fish Hatchery, located near Bridger in southcentral Montana. Bluewater Fish Hatchery produces trout and is the third largest production facility in the state. This is the first time New Zealand mudnsails (NZM) have been found at an FWP hatchery.

The likely cause of the infestation is a drainpipe from the hatchery that drains into neighboring Bluewater Creek, which is positive for NZM. The operating procedures for the hatchery call for the pipe to be elevated above the creek, but over the years, the pipe has become submerged. NZM were likely able to make their way up the pipe and into the hatchery, according to FWP.

The department is continuing its investigation on how exactly the New Zealand mudsnails were able to get into the Bluewater Fish Hatchery and whether infected fish were stocked at lakes or reservoirs.

New Zealand mudsnails are an aquatic invasive species. It was first discovered in Montana in 1995 in the Madison River above Hebgen Lake Reservoir. Since then, they have been detected in multiple locations across the state.  NZM can be eaten by fish and other animals, like birds, but unlike native snails, they are undigestible and can be spread by fish and wildlife into other waterbodies.

In a confined facility, like a fish hatchery, NZM can be quickly eradicated and the facility decontaminated. However, due to the detection, the fish at the hatchery – about 20,000 pounds – were euthanized and disposed of. FWP had about $85,000 into rearing the fish. FWP staff are working on a containment and mitigation strategy, the department said.

The plan is to make up the losses from Bluewater with surplus fish from other FWP hatcheries.

Prior to this detection the Bluewater hatchery had contributed to relatively few releases in 2020, all of them into state/public waters. Monitoring for New Zealand mudsnails and other invasive species will continue in these waters and others.

All hatcheries in Montana are inspected annually for AIS and fish pathogens. The mudsnails at Bluewater Fish Hatchery were detected during the hatchery’s annual inspection.