Results of recent research from The Conservation Fund Freshwater Institute 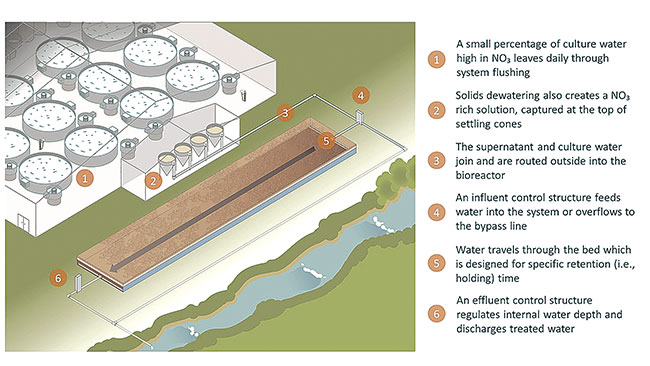 Nitrate remediation is essential to RAS facilities that are regulated by nutrient discharge limitations and will be instrumental in maintaining sustainable industry expansion. Recent investigations have suggested that denitrifying woodchip bioreactors, a biologically driven NO3-N remediation technology developed for agricultural systems – where woodchips supply both carbon substrate and surface area for attachment of denitrifying bacteria – may also be applicable for the treatment of aquaculture discharge (Fig. 1).

Several aquaculture facilities have recently installed bioreactors, although there is still much to be learned about bioreactor design and management. The successful application of bioreactors at a commercial scale is dependent on continued research for adapting and optimizing bioreactor design for aquacultural use. FI recently evaluated an engineering design modification, in the form of alternate inflow structures, to improve bioreactor performance and reduce system clogging.

For the initial 630 days of operation, the manifold design did not significantly impact bioreactor treatment of wastewater (i.e., bioreactor inflow) produced under FI’s typical operating conditions. Regardless of manifold design, nitrate removal efficiency ranged from 60 ± 1.6 to 80 ± 1.2 percent, dependent on inflow water temperature, while total suspended solids removal efficiency was steady at 92 ± 0.5 percent.

Towards the end of the second year of operation (starting around day 637), the multiple manifold began to outperform the single manifold, with an approximately 11 percent and 12 percent increase in nitrate and suspended solids removal efficiency, respectively. This change in bioreactor performance coincided with a change in inflow water quality, as the bioreactors experienced a period of elevated total ammonia nitrogen, chemical oxygen demand, and total suspended solids in the wastewater. The water quality change occurred during a period of atypical operating conditions at FI, resulting in a longer holding time in settling cones and supernatant holding tanks and increased mineralization of the wastewater before it entered the bioreactors. Differences in manifold performance could not be attributed to inflow water quality, as both manifold designs were subjected to the same change.

Neither bioreactor design reached a failure point, i.e., where plugging in a bioreactor would cause the water level to rise above the bed of woodchips, after two years of operation (784 days), indicating aquaculture wastewater treatment in woodchip bioreactors is viable longer than previously evaluated. Both designs kept bioreactors operating without excessive clogging over the extended study period, demonstrating < 4 cm of water head loss was produced across each reactor and approximately 17-25g removal of NO3-N m-3 d-1 (from treating 49-52 mg NO3-N/L inflow) during their second year of operation. The multiple manifold design may extend the bioreactor lifespan, but further study is needed to determine the failure point for each manifold style as well as alternative bioreactor designs.

Note: For a list of references cited in this article, please email the editor
mdeguzman@annexbusinessmedia.com