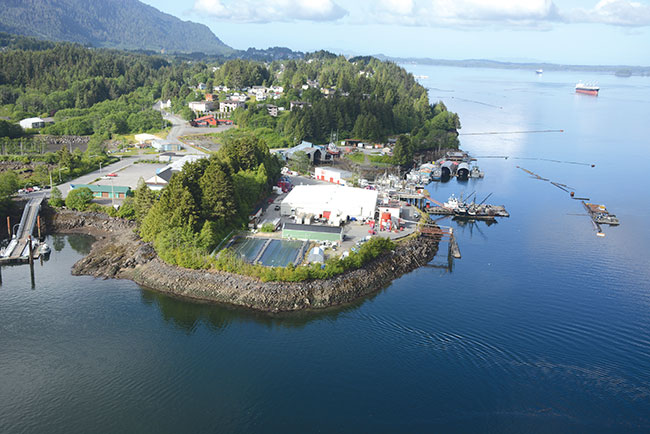 "I'm hesitant to attribute the success of the hatchery to one factor or another, but without the natural setting, without the water we have here, it would never work." - Michael Uehara (Photo credit: Port of Prince Rupert Shorezone photography project)

With the developing success of Coastal Shellfish’s scallop farming operation, almost two decades of research and hard work are starting to pay off for British Columbia’s Coastal First Nations (CFN) in Canada.

After a long process of researching sites, species and production techniques, Coastal Shellfish began operation in Prince Rupert, B.C., in 2013. Today, it has roughly 15 million Japanese scallops (Patinopecten yessoensis) in the water and, as of press time, were set to begin selling shucked meat in February.

“The biggest challenge for shellfish aquaculture, particularly scallop aquaculture, is it’s not something that’s established in a two-year window, or even a five-year window,” says Coastal Shellfish CEO Michael Uehara. “It’s something that has always taken a long time due to the extreme customization you have to engage in in order to make it work.”

While an exact count of scallops in the water won’t come until they’ve been collected, Uehara says the spawning season was successful and that 2019 was their first commercial brood year. Coastal Shellfish moves between 2,000 and 10,000 live scallops per week through distributors in Vancouver, though Uehara says that shucked meats sales are anticipated to be significantly larger.

“It’s a fully-integrated system,” says Uehara. “We have a hatchery, in-ground ponds that we use as an extension of a nursery, and we have four grow-out sites. Some we use specifically for juveniles, some for adults. We’re primarily using lantern net culture, but after some experimentation, we’re also devoting quite a bit of our scallops to ear hanging.”

Hatchery development
While Uehara describes his company’s hatchery as “a work of art,” and says the operation would be impossible without the high-volume and high-quality algae produced in their microbrewery. He stresses how specific and individual scallop growing operations are. No matter how technically superior your facility may be, you need to take the time to find the right approach given your specific combination of species, water quality and other logistics.

“Even if you had a perfect formula for a scallop hatchery, you can’t execute that perfect formula at any given location,” says Uehara. “There’s a lot of investment that goes into the fine tuning of a hatchery to make it productive.”

Uehara says that while the failure of a shellfish aquaculture operation is often attributed to one or two causes, like ocean acidification or low water salinity, they are also subject to potentially hundreds of other factors. There is no one-size-fits-all solution, but an ideal setting with access to great water, like Coastal Shellfish has, certainly helps.

“These are natural live animals and they require a great deal of knowledge to make them work,” says Uehara. “Any one of these factors that won’t work will greatly reduce your success, if not turn it into a failure. I’m hesitant to attribute the success of the hatchery to one factor or another, but without the natural setting, without the water we have here, it would never work.” 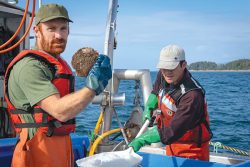 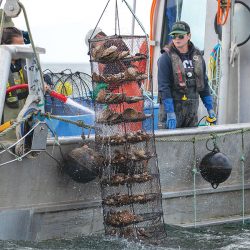 Coastal Shellfish moves between 2,000 and 10,000 live scallops per week, like those being harvested by Wolfe Island site manager Dani Robertson here, through distributors in Vancouver. 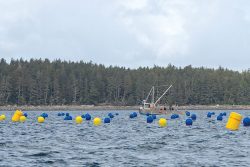 The farm’s skiff Will OI (Tsimshian for “Big Bear”) patrols the waters of the Pike Island site.

Maintaining order
The biggest trick to success in scallop farming, Uehara says, is maintenance – staying on top of fouling, keeping a keen eye on growth and feeding rates, and exercising good inventory management. That said, Uehara hesitates to call it “labour intensive.”

“It’s information intensive. It can be labour intensive, but it doesn’t have to be labour inefficient. The more you know, the more you can efficiently utilize labour and the resources you have to address those issues. “

Given the amount of time and experimentation required to find the best approach, the trust and enthusiasm of stakeholders are important. And the CFN is wholly committed to re-establishing an economy of inclusion for First Nations in that area. Those first nations make up 90 percent of Coastal Shellfish’s ownership.

“The idea of creating an ocean-based economy, I believe is both a cultural and economic imperative,” says Uehara. “When you have shareholders that are invested to that degree, it’s quite inspiring and motivating for this company to perform. For our shareholders, this is a business and an industry that they are bound and determined to make work.”

Uehara anticipates that they will reach regular operations with production and distribution firing on all cylinders within the next 16 months. At that time, they may look at expanding the operation, and have already started experiments with oysters and kelp.