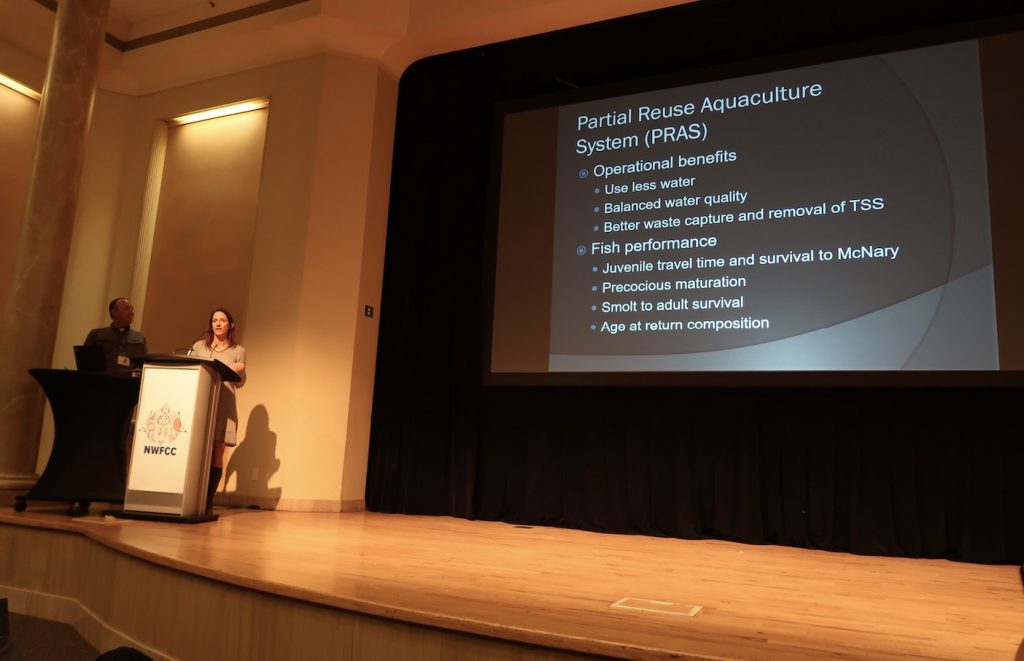 VICTORIA, B.C. – Chinook salmon smolts reared in a partial reuse aquaculture system (PRAS) are performing as well, or in some cases, outperforming their counterparts reared in traditional flow-through raceways in Washington State.

Senior fisheries biologist Catherine Willard from Chelan County Public Utility District led a presentation on the team’s findings at the 70th Northwest Fish Culture Concepts Annual Meeting and Workshops in Victoria, B.C., Canada. On Dec. 3, she shared the stage with Josh Murauskas of Four Peaks Environmental to share what they have learned in raising 500,001 summer Chinook yearling smolts at the Eastbank Fish Hatchery.

When they first started tracking the coded wire tags (CWT) and the passive integrated transponder (PIT) tag data of the fish reared in PRAS and their “SUPER” raceways, Murauskas said the one question they wanted to answer is if the PRAS reared fish was going to perform in the same way, if not better.

“Every single year, and not only in this program but in other programs we looked at, it’s a slam dunk,” he said.

Murauskas showed graphs that indicated PRAS fish that had consistently faster travel times downstream than the raceway fish. In five of the past seven years, RAS fish have also seen better survival rates than their raceway counterparts. In the Chelan River, data showed a 20-percent increase in survival rates of juvenile summer Chinook.

Aside from the improved water conservation and quality, the shape of the vessels where the smolts were reared make a huge difference, said Willard. She said it’s as if the fish reared in the circular PRAS vessels are being raised on a full exercise program – like on a treadmill as opposed to just sitting at your desk.

“We joke about treadmills and all these kinds of stuff but it’s about one and a half to two body lengths per second that you’re seeing the fish in the reuse (PRAS),” added Murauskas. “And they’re also distributed a lot throughout the water column, as opposed to a raceway. In a raceway, it’s maybe about half a body length per second.”

Chelan Public Utility District’s (PUD) Eastbank Hatchery pumps its ground water from the Columbia-River-charged Eastbank Aquifer, which is shared with the regional water supply system. The Eastbank Aquifer provides water to businesses and residents within the greater Wenatchee Valley. Projecting increases in demand from the regional water supply system due to community growth, Chelan PUD evaluated options for water conservation at its Eastbank Hatchery.

The pilot program for the PRAS system was first implemented in 2008. They quickly realized the operational benefits of using identical flow and density indices that use only a quarter of the amount of water used in traditional flow-through raceways.

The water quality was also consistently better because of the consistent hydraulic flow that distributes the dissolved oxygen throughout the circular vessel. Willard said waste capture of suspended sediments in the water is also “emphatically improved.” Staff labor is significantly reduced because of the tanks’ self-cleaning attributes.

“It was just a pilot for just a few years,” said Ian Adams, hatchery maintenance and operations coordinator at Chelan PUD. “The intention was to actually just tear it down. It was so successful that we left it.”

Adams helped implement the PRAS system in which 120,000 summer Chinook are being early reared in. The other 380,000 smolt are reared in the “super” raceways. He said the advantage of a PRAS system, instead of a fully recirculating aquaculture system, is that there is a lot more risk involved in reusing 100 percent of the water.

“We’re bringing in roughly 20 percent of make-up water which is balanced with the appropriate alkalinity, the appropriate D.O. (dissolved oxygen), so we already have this guarantee of nice water coming in,” Adams explained to Hatchery International. “When you do 100 percent recirc, you’re relying on all that infrastructure to keep functioning to keep that water quality at the appropriate balance.”

Based on their findings at Chelan PUD, Willard said the PRAS system comes highly recommended.

“If you’re building a new hatchery, there is no other vessel. You should do circular vessels and if you can, do reuse because you use less water,” she said.

After completing 10 years of this program, Willard said Chelan PUD is looking to rear additional steelhead stocks in circular vessels, expecting similar results. She said the team is also interested in diving deeper into the mechanisms that are contributing to the better performance of PRAS fish.

“We think it’s because they’re exercising but we don’t know for sure. That would be an interesting thing to figure out – what specifically is happening with the fish to make them perform better,” said Willard.