Features Research
Boom and Bust in the Med 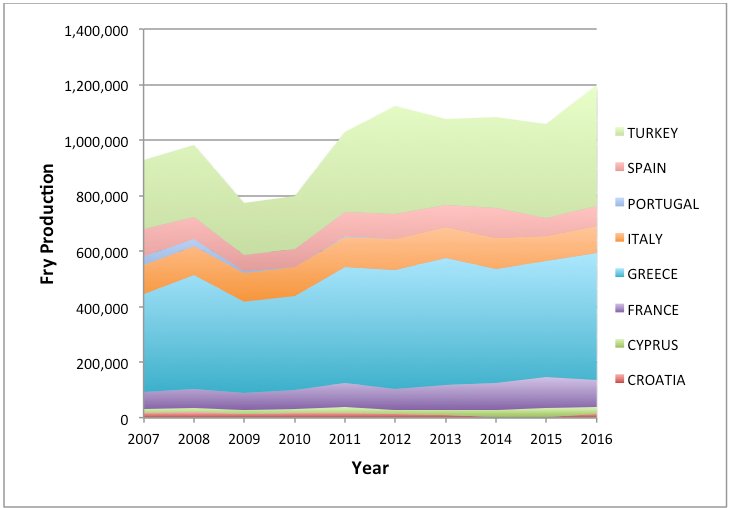 Are sea bass and sea bream hatcheries in the Mediterranean setting the stage for another industry crisis?

Many aquaculture sectors have bumpy starts that can ultimately last a few decades.  The best example, and the first real modern aquaculture industry, is salmon farming in Northern Europe.

Since the 1970s the salmon sector has boomed and crashed several times, with feed companies having to bailout most producers and then selling them again to private investors, with countries like Norway providing support to keep it alive.

Bass and bream farming in the Mediterranean is no exception as are the pangassius andbarramundi industries in Asia.

In this article I want to combine data from two interrelated articles I wrote for Hatchery International,  and also send out an alert to companies in the Mediterranean regarding a likely upcoming bust if nothing is done to change course.

In 2009 I wrote about the impact of long production cycles on mismatches between supply and demand as the main cause of boom and bust cycles in the industry.  Later, in 2012, I discussed the dilemma of fry producers between cooperating amongst themselves (and optimizing industry value) or not (and looking only at their immediate gains) and on the impact that these strategic options can have on the value of the whole industry.

Last year (2016) was a peak year in terms of bass and bream fry production in the Mediterranean and with the 18-month production cycle of these species, in 2017 we will start to see large volumes of these species available in the market.  But other factors affect this picture and we don’t yet know how they will play out…

Figure 1 shows bass and bream fry production in the Mediterranean. As we can see, after the production of close to 1 billion fry that led to the 2009/2010 industry bust, since 2011 production volumes have again increased to the 1 billion (1B) fry level and in 2016 they reached almost 1.2B fry.

However, fry supply by itself is not the only predictor of the supply of market-sized fish.  In the last 3-4 years pathology in various parts of the Mediterranean as well as weather-related losses have increased overall mortality from fry to harvest.  It is not easy to put numbers on this but I believe that overall sea-bass mortality must be between 40-50% and for sea-bream this value is between 25-35%.  These numbers have been going up steadily but over the last 12 months, owing to a soft winter and summer, these values may have come down a bit.

Italy is a key country in the bass and bream industry, not so much because of supply but mainly because of its impact on demand.  Italians eat and trade close to 50% of the Greek bass and bream production and a smaller but growing fraction of Turkey’s production was well.  With an economic crisis looming and the weak status of major Italian banks there is a real risk that the global demand for bass and bream will go down in the near future.  Some Greek producers I talked too already see a reduction in demand from long-time Italian customers and payments have been taking longer and longer to be settled…

In the article I wrote about the fry producer’s dilemma there was a simulation that attempted to predict the value of the bass and bream industry as a function of total annual fry production and of average production costs.  (The results are shown in Figure 2).  What is worrying is that fry production volumes today are close to the right side of the x axis in the graph and average production costs, owing to increases in mortality, are also becoming very close to the green line on the graph, in many farms exceeding the 4.5€/kg (a reminder also that this is a luxury product with a limited market).

Can we do something about it?

The industry is again, as they say, between a rock and a hard place.  If a harsh winter leads to high mortalities, supply in 2017 may not be as high as forecast, but costs of production will go up.  The fry is already in the sea and eating food, every day…

Sales and Marketing departments in the larger companies have been improving and the size of the bass and bream market has been growing but at a relatively slow pace.  These high-value species remain traditional culinary prizes of Southern European kitchens even if the potential is there for other, richer markets.

Consolidation of the industry continues and this is also good.  In Spain Culmarex now produces over 50% of the national volume. In Greece Selonda got Dias and there is activity for further consolidation that may lead to a giant company made up of Selonda plus Nireus. In Turkey the number of companies has been coming down through consolidation and we now have a few large or very large players in the country.

There is a risk, however, that this potential oligopoly shoots itself in the foot by focusing only on market-share without valuing profits enough.  If there are no internal regulatory mechanisms, such as the Fry Council I proposed early in 2009 or other ways to regulate supply, the industry will become a victim of its own ambition…  Today in the salmon industry we have reduced sales points, very high industry consolidation and mechanisms that limit production; the result is that for the last few years the price of farmed salmon has more than compensated farmers for the harsh conditions they work in!

Diogo Thomaz, PhD, MBA, is a Technical and Business Consultant for the aquaculture industry based in Athens, Greece. After 15 years as R&D project manager and other industry positions he now leads Aquanetix (www.aquanetix.co.uk), a data management and reporting service for the global aquaculture industry.  He also heads RealSales Ltd (www.realsales.eu) a sales consultancy company that helps businesses expand their opportunities in export markets.  He can be contacted by email on diogo@aquanetix.co.uk