Troutlodge’s European Rainbow trout egg production sites lie within the British Isles on the independently governed Isle of Man. The island’s status is that of a self-governing Crown dependency, but via the UK’s current membership in the EU it is considered part of the customs territory of the European Union, facilitating trade and stock movements. 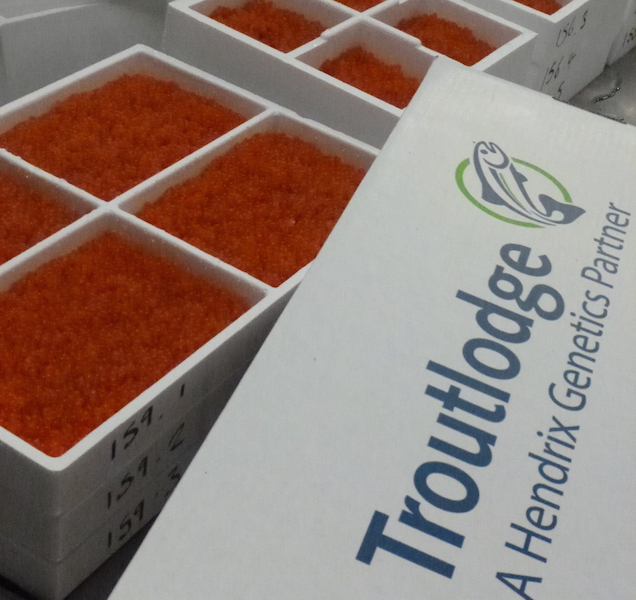 Between its two farms on the Isle of Man

Although the island is small, 32 miles long and 14 wide, Troutlodge operates two farms on the island. The main incubation centre and broodstock farm called Glen Wyllin is on the scenic west coast at Kirk Michael and has been in operation under various monikers since 1947.

The other farm, Cornaa, which is a government-owned facility close to the northern town of Ramsey, produces a spawning crop which is then reconditioned and used to restock around 23 tonnes for angling purposes in the reservoirs around the island, an arrangement operated under a cooperative agreement with the Isle of Man Government’s Department of Environment, Food and Agriculture.

The Glen Wyllin farm was subject to a considerable investment over the past few years, including photoperiod systems for advanced and delayed spawning along with on-growing of subsequent year classes.

The showpiece of the farm is the egg incubation facility, consisting of five independent recirculation units designed by TMC. These provide the flexibility to hold large batches of eggs at the same temperature profile whilst providing multiple incubation strategies which can be utilized to meet customer requirements. A record keeping system which was designed in house also provides the traceability requested by customers involved in chain of custody assurance schemes. It allows for analysis of criteria such as yields in each batch, and contrasting survivals through the triploidy process

Sorting all the broodstock to test for ovulation on a weekly basis is a labour intensive task, but this allows for spawning in one or two batches to make best use of available staff from the small team, as well as bringing eggs into the hatchery in fewer, larger batches. These are then incubated discretely to produce significant numbers on synchronized degree day development for customers’ convenience.

Each batch of eggs is incubated undisturbed until visibly eyed. At around 200 degree days shocking is undertaken prior to sorting through Winsorters, after which eggs undergo a proprietary process to remove pale and poorly developing eggs. Improved quality control measures after this stage (random counts within the batches and reprocessing where necessary) as well as the retention of a quality control sample for hatching checks are all important parts of the process.

Between the two farms 50-60 million eyed eggs are produced from October to April each year, with increasing effort on photoperiod to extend and balance the supply.

Eggs are distributed from the island to a worldwide customer base, so the freighting and logistics

system are subject to a great deal of focus and effort. Provision of correct documentation to allow for smooth customs clearance at the recipient border is essential, and the company has been aided in providing these by the local government Agriculture office which provides and validates health certificates. Shipments are monitored at critical flight changes by the freight provider, TQ Express, which is based in Manchester. Customers are kept up-to-date with progress and have e-copies of documents in advance of arrival of goods.

Shipping freight off of a small island may be challenging at times, but is compensated for by the exceptional health status enjoyed here. The Island lies within its own zone and is approved by the EU as free of IHN, VHS, IPN, BKD, SVC and Gyrodactylus salaris. To support the pathogen-free status both farms undergo surveillance testing twice per year which is undertaken by CEFAS (Centre for Environment Fisheries and Aquaculture Science – a UK Government agency) on behalf of the Isle of Man Government.

The farms saw two major steps forward in the season which stretched between 2015 and 2016. Firstly, in December 2015, the island sites took delivery of a shipment of elite Troutlodge rainbow trout eggs from the breeding programme in the United States. This stock movement was negotiated with the Isle of Man authorities, and the imported stock was hatched and grown under strict quarantine conditions until the fry were large enough to undergo disease testing. On receipt of a clean bill of health the fry were placed within the wider farm and mark the first step in standardizing the genetic material supplied from these sites with Troutlodge in the US.

The other development was that after almost a year spent committing operating procedures to paper (or word files), reviewing record keeping, production plans and training, as well as preparing policies and protocols, the company achieved GlobalGAP accreditation for all farm base and aquaculture base – finfish, in February of 2016. As an initial assessment this represents a significant change in operations, but one which provides a significant basis for the company to continue to develop on.

With logistics and production improvements in hand as outlined above, ongoing product development is driven by the research and selection work undertaken in the United States. This itself now has deeper support as Troutlodge is part of Hendrix Genetics’ Aquaculture business unit which also includes Landcatch in the UK (Atlantic salmon egg and juvenile producer), and Hendrix Genetics Aquaculture SA in Chile (Atlantic salmon and Rainbow trout egg and juvenile producer).