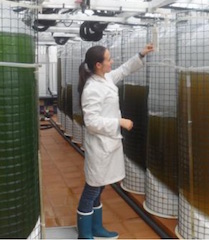 Production systems for the large volumes of microalgae that are needed in mollusc hatcheries should be controlled to avoid the risk of introducing potential pathogens.

The culture of bivalve molluscs is an important industry in several European countries (and elsewhere), however, the high level of production already attained (with the exception perhaps of mussels) is insufficient to meet current demand.

Hatcheries already play a key role in some regions as suppliers of spat to commercial growers, and in aiding the recovery of exhausted natural beds that are subjected to over-exploitation or environmental degradation. Hence they are the key to expanding the molluscan culture industry. The main remaining bottleneck continues to be the massive larval mortalities owing to infections caused by bacterial pathogens, mainly of the genus Vibrio, although Herpesvirus and some parasites also play a role.

These issues were discussed in a paper presented at the EAS Aquaculture conference held last October in Rotterdam, the Netherlands, by Juanluis Barja from the Universidad de Santiago de Compostela, Spain.

Barja argued that water is the common link between molluscan broodstock, larvae, and the

microalgae used as their food. In hatcheries water can be subjected to a range of treatments that reduce bacterial populations, but which may also have negative consequences: filters can result in localized areas of heavy contamination, and UV treatment can produce bare spaces easily colonized by opportunistic bacteria.

Additionally, broodstock conditioning procedures can modify the bacterial population and have an important influence of larval survival. Finally, production systems for the large volumes of microalgae that are needed should be controlled to avoid the risk of introducing potential pathogens.

In recent years, much effort has been dedicated to the study of molluscan biology, genomics and of their associated microbiota, however there is a lack of standardized procedures that can be applied in hatcheries or on the farm, especially for disease outbreaks. This fact was corroborated during meetings with hatchery technicians.

As a result of the different projects developed by Barja and his colleagues (S. Prado, J. Dubert, A.L. Diéguez, A.E. Toranzo, and J.L. Romalde) over the last 10 years, much information on molluscan microbiota and of hatchery systems has been obtained They have demonstrated the presence of both well known and new pathogens and the dynamics of their pathogenesis, of effective probiotic and quorum quenching bacteria, and of the effects of phytoplankton microbiota and different broodstock conditioning procedures on the successful production of larvae. The group has also successfully demonstrated the use of a probiotic mixture for the culture of molluscs in a real hatchery scenario.

Nonetheless, there is an urgent need for work on hatchery health management. Research should be strongly oriented towards the generation of practical procedures and protocols adapted to current hatchery needs and augmenting the knowledge and skills of hatchery personnel to help the development of sustainable technologies for the 21st century.

For more information contact Juanluis Barja by email at: juanluis.barja@usc.es