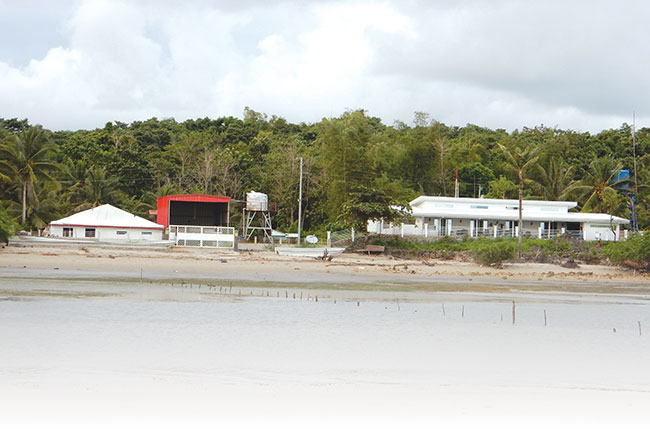 The hatchery facilities in Magsaysay, Mindoro.

Arton Aquafarms located on the island of Luzon in the Philippines is not just cultivating oysters to expand into the Southeast Asian market, it’s also helping to sow seeds of progress for its community.

Arton is a family-owned and operated oyster farm in the island of Mindoro. It has an oyster hatchery and nursery producing Crassostrea iredalei and Kookiolada.

All the oyster seeds produced currently go to its grow-out operation. Eventually, Arton intends to sell its seeds to contract and independent farmers, as well as government agencies. Basic indicators point to a robust business.

“Currently we are unaware of any other large-scale oyster hatcheries so we don’t have much competition at this time, especially with our water quality combined with the latest bag-tumbled technology product,” Mark Tagal, Arton Aquafarms president, co-owner and chief biologist tells Hatchery International.

Family business
They use newer oyster technologies like grow-out floating bag culture. “We produce specialty single shell oysters – free from grit and deep-cupped. And our oysters are growing in the zone of highest productivity,” Tagal says.

The first oyster seeds were harvested in July 2017. “The original group of seeds out of the hatchery were poised to plant out a large batch around December 2019 but all was lost due to hurricane Ursula,” he says.

The initial number of spats they put out was estimated at 250,000. The target was one million. Currently, the projection is six plantings a year, producing 30 million plantable oyster spats per year.

Arton Aquafarms is also a story of a man who left but never forgot. In the 1960s, Antonio “Tony” Tagal left his hometown in the Philippines to start a new life in the U.S. He left behind his siblings, most of whom still live in the country to this day. Among them is Arturo.

One of the things that continued to connect him to them all these years is farm ventures. Arton is an amalgamation of the two brothers’ first names. “The goal of this company – which actually started out as a pig farm then a mango farm to a fish pond to a vegetable farm selling peppers for pizza toppings – was to create a company that would support the family still in the Philippines,” Tagal says. He is the son of Tony, who is Arton’s CEO and owner.

Arton Aquafarms was specifically conceptualized with Mark in mind. “We wanted to have an aquaculture company that could utilize Mark’s talent in raising marine life, along with supporting our family currently living in the Philippines,” Tony says.

In the field of hatchery, Mark is privy to the latest information in shellfish technology, being based between Hawaii, Washington State and the Philippines.

Growing pains
Mark considers the 2019 wipe-out as part of his company’s growing pains. Another one was staffing. “There really isn’t a ‘commute’ possibility with the remote location and 24-hour nature of the work,” he says. The farm is in the coastal town of Magsaysay and located at the southernmost tip of the province. The provincial capital is almost 175 kilometers away.

“Our biggest challenge is also one of our biggest advantages and that is the isolation of our location. Being in Southern Mindoro, it can be difficult to sometimes get the most basic of supplies. This requires a lot of advanced planning, stockpiling and ingenuity going into keeping the hatchery running,” he says.

They spent a year looking for a site in the island with two non-negotiable factors. “We were able to secure land close to our grow-out locations that had the premier quality water profile we desired,” he says.

Mark is based in the U.S. He schedules farm site visits three to four times a year, sometimes spending up to one month per visit. When operating remotely out of Hawaii or Washington, he relies on internet communications 24/7.

When visiting the Philippines, he brings much needed supplies that are often hard to procure in the country.

The number of Arton staff varies with production needs. From a minimum of “around five,” they go up to 15 employees at peak times.

Having a hatchery, he points out, ensures more plantable spats for their bag grow-out technology.

At present, the farm works with two brokers that sell oysters in the local public markets. It is just a matter of time before they move up the market segment ladder. The goal is to produce single shell oysters for the half shell market. “Because our oysters are produced in clean water, our target market is higher-end eating establishments in the long run,” Mark explains. 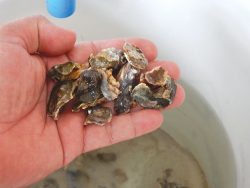 Arton produces Crassostrea iredalei and Kookiolada seeds, which are currently used for its grow-out operation. Profits provide assistance to the owners’ relatives and communities in the Philippines. There is ongoing support to set up educational scholarships for the children of Arton workers.

Healthy broodstock
With the limited production in grow-out in the first year and the product just coming into the market, Mark projects that “most likely 100 percent” will be sold. In the future, the company intends to hold back 15 percent for oyster reef preservation.

“By maintaining healthy populations in the wild, we can ensure future healthy broodstock. Buyers are mostly in Manila at this time but we will be working with seafood brokers for future distribution,” he says.

Arton aims to become Southeast Asia’s largest shellfish distributor. “We provide a clean and sustainable, responsibly raised, aquaculture product that benefits not only us but also our neighbors in surrounding communities and diners throughout the Philippines.”

But long before Southeast Asia came into their line of vision, Arton has already been keeping particular communities very close to their heart.

“The goal of the company was to create a company that would support the family still in the Philippines,” he reiterates. “This goal expanded to caring for our immediate family to distant family members, friends that are like family and even the communities at large in the mango farm in Batangas to the oyster farm in Mindoro.

“We proudly support not only our workers but their families so their children can attend private schools and even support them through college if they wish to pursue a higher level of education. There is ongoing support to set up scholarships on behalf of our workers and their families because knowledge is power. Everyone desires an equal shot at a quality education and Arton Aquafarms seeks to support this mission as best as we can.”