With huge contributions to the livelihood, employment and food security of coastal communities in Nigeria, the fisheries sector is one of the country's most important. Amidst a high demand for quality catfish seed, one hatchery in Ughelli Delta State could have significant impacts on Nigeria's aquaculture. 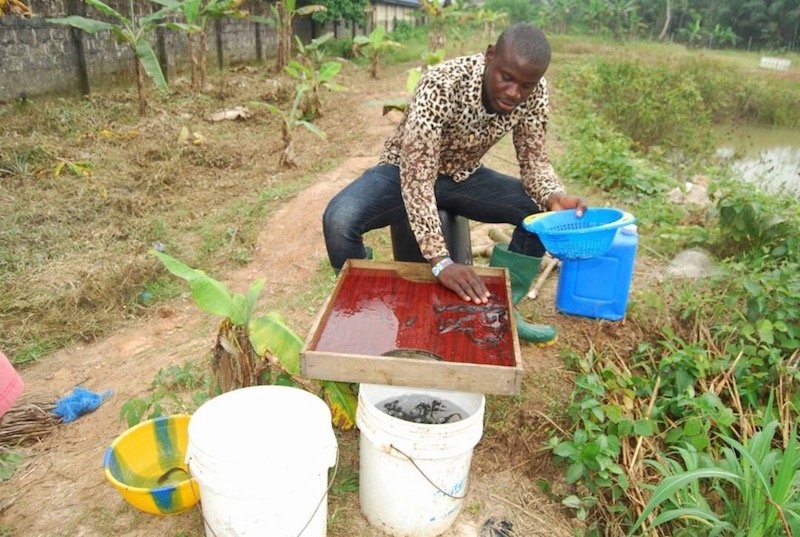 Catfish and their hybrids (Clarias heterobranchus) make up around 80% of overall cultured species in Nigeria, with African catfish (Clarias gariepinus) the most significant. It is among the most highly demanded fish species in other African nations owing to its resistance to disease, ability to tolerate a range of environmental extremes, high stocking densities, fast growth (reaching 1kg within four to five months), pleasant taste and good quality meat. Because it eats a variety of foods, such as aquatic weeds and insects, small fish and snails, it’s also extremely easy to feed and its high fecundity and fertility rate allow it to produce over 4,600 eggs.

V&T Hatchery Ltd at Ogode quarter in the town of Ufuoma in Nigeria’s Ughelli Delta State has been producing catfish seed for Nigeria’s aquaculture industry for the past four years. In light of the high demand for such seed, the hatchery’s establishment in February 2013 was extremely significant for many in the aquaculture industry.

“Before, farmers were buying seed from unreliable and distant sources,” said Oleh Donald Emuejevoke, the hatchery owner and a former fish farmer. “They were also taking seed from the wild, but it can be difficult to determine the correct age of seed that comes from natural waters, and it doesn’t often meet the necessary criteria for good aquaculture production. Seed that is bought from far away has a higher mortality and stress rate, and of course there are additional costs for transportation. The lack of a good supply of quality fish seed is a major challenge for catfish production in Ughelli and Warri Delta State. Our hatchery was established to address this.”

Today V&T Hatchery Ltd supplies fingerlings to most aquaculture farms in Ughelli Delta State. Using an artificial propagation method, the hatchery environment is controlled and starts with the selection of broodstock that usually weigh between 2 and 3kg (2-2.5kg for males and 2-3kg for females). Induced breeding is conducted using a hormonal treatment before artificial fertilization and incubation of the fertilized eggs, which are then reared for up to four to five weeks when they become fingerlings.

“We select our broodstock from our rearing ponds and induce final maturation and ovulation using hormone treatment,” said Emuejevoke. “The eggs are procured through stripping and the milt through dissection of the male donor. After artificial fertilization, egg incubation and hatching, we’re then ready to rear the larvae.”

Extra care must be taken with the larvae during the first week of life, and certain feeds play a major role in their growth and survival. During week one, they are given shell-free decapsulated Artemia eggs or Coppens feed of 0.22mm. Some farmers use daphnia, which is cheaper to obtain.

The size of the feed is increased in week two to between 0.3mm and 0.5mm and changed to Skretting feed of between 0.5mm and 0.8mm as the larvae grow into fry and fingerlings. By week five, the fingerlings have already reached the required size of around 2 – 3cm but can sometimes be slightly bigger. To reach the juvenile stage, they are fed Skretting feed of 0.8mm – 1.8mm before being sorted according to size. Feeding then continues manually and the fingerlings are fed three to four times a day every four hours until they are big enough to be sold.

Due to an unsteady power supply, aerators cannot be used at the hatchery so oxygen levels are monitored through virtual observation with a constant flow-through system. Measuring temperature is also challenging owing to the lack of technology available, but can be kept steady by constantly covering the tanks with tarpaulins, especially when the weather is cold. This also keeps predatory insects away.

The hatchery occupies around one hectare of land and is designed to produce about 2.4 million fingerlings a year. It supplies around 280m3 of water for the tarpaulin ponds each day. Two full-time employees and five part-time workers operate a flow-through system throughout, getting water from a borehole that is channelled to a holding tank and powered by a generator water pump. Sodium bicarbonate (soda ash) is used to treat the water after pumping before it is supplied to the hatchery.

Each tank raises 25,000 to 30,000 fingerlings. Although some fingerlings are sold to local aquaculture farms, others are reared further in other tanks to avoid overcrowding and to maintain the right oxygen levels for growth. The hatchery keeps a total of 14 tarpaulin tanks and 10 earthen ponds. The water temperature in the tanks and ponds is usually kept between 26C and 28C.

In future, V&T Hatchery Ltd hopes to bring in more technology, hire more skilled and unskilled workers, offer more training to its staff and establish branches in Ghana and other African nations. It also recognizes the need to offer plenty of good quality production to meet an increasing demand from other countries. Given the hatchery’s key role in providing quality seed, however, Emuejevoke believes that from now on, the hatchery will have even bigger parts to play.

“Although catfish farming is popular in Nigeria, the industry is in the infant stages, and there is still a lack of adequate infrastructure for hatcheries and fingerling production,” he said. “However, we want to work hard to expand. Our aim is to grow further, firstly to meet the demand for seed in Nigeria and then supply Ghana and other African countries. We also want to look into culturing and hatching other species of freshwater fish, especially tilapia. There is still a lot to do, but I continue to remain optimistic.”