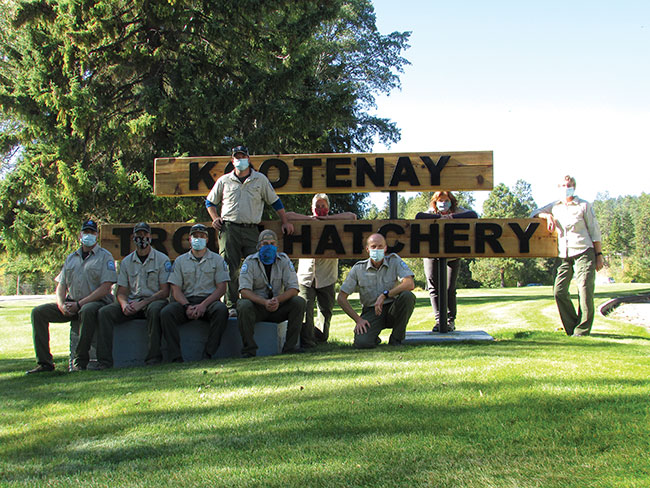 Fishing is a hobby for the patient – like watching paint dry. But to any avid angler, fishing is a respite from life’s stresses. They’ll talk about fishing as an escape from reality and a chance to be enveloped by the sound of calming water and breathe in fresh air. The catch, many will say, is just the icing on the cake.

This is most likely why fish farmers who cater to the recreational fishing market reported an increase in sales since the start of the COVID-19 pandemic, which is a stressful period for most. Sales of angling licences in the United States, Canada and the United Kingdom have increased.

“People who haven’t fished in years are going out and catching fish,” says Katie Mackey-Harris, a second-generation trout farmer in Paynes Creek, California. She says sales of trout to the recreational market are “as strong as it has ever been, if not more so, with this pandemic.”

Recreational fishing licences went up by 30 per cent in Alberta and Manitoba; 20 per cent in Ontario, and 15 per cent in British Columbia and Saskatchewan, CBC News has reported.

Owen Schoenberger, hatchery manager at the Kootenay Trout Hatchery (KTH), located in the town of Bull River in British Columbia, says angling license sales at KTH reflect the provincial trend. While sales to non-residents went down significantly due to border closures, he notes the rise in license sales to B.C. residents somehow made up for the slack.

“The increase in resident angling licence sales provincially is one of the silver linings to the pandemic. Fishing is one of the many other outdoor activities that allowed for social distancing. Hopefully, the people that bought licences because they renewed their interest in fishing, and the ones that started fishing for the first time, will stay interested in the activity and keep buying licences in the future,” he says.

The hatchery raises fish – primarily Rainbow trout, and some Cutthroat trout, Kokanee and Eastern Brook char – to stock local lakes. It is one of the six hatcheries owned and operated by the non-profit Freshwater Fisheries Society of BC (FFSBC). Every year, KTH and FFSBC’s other hatcheries, located in Abbotsford, Duncan, Summerland and Clearwater, release a combined five million to six million fish into around 800 lakes throughout British Columbia to support the provincial recreational fishing program.

The COVID-19 pandemic has highlighted the role that hatcheries such as KTH play in the community. Schoenberger notes that close to 50 per cent of freshwater angling in B.C. occurs in lakes stocked by FFSBC. “There would be a significant reduction in angling opportunities in all regions without the provincial stocking program,” he says. 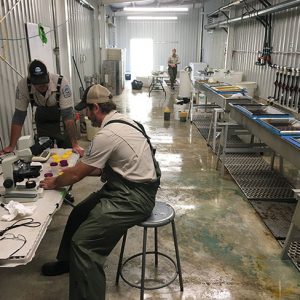 Staff fertilizing and triploiding kokanee eggs. All fish raised at KTH and released into the Kootenay Region are triploid or all-female triploid (non-reproductive), except those used for brood replacement. In some years, KTH raises reproductive fish to be released into other regions of British Columbia. Photo: Kootenay Trout Hatchery 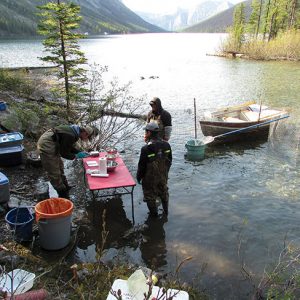 Going green
The Kootenay Trout Hatchery has implemented major retrofits since it opened in 1966. In the early 80s, fish health concerns prompted a switch of the water source from surface water to groundwater.

Schoenberger recalls that the original water supply was surface water from the nearby Norbury Creek, which was diverted to the hatchery through a kilometer-long pipe. The switch in the mid-eighties meant a more consistent water supply. And because it was a groundwater source, fish were not exposed to disease or pathogens that could come with river water.

In 1987, decision was made to put a cover over the raceways that housed the fish because the open raceways would often freeze over in the winter. This also provided protection from predators such as ducks, herons and king fishers. The enclosure also virtually eliminated the transmission of pathogens by these predators from the creek to the hatchery fish. Being now shielded from the sun, algae growth is also prevented.

“The hatchery has evolved over the years. We originally had 20 concrete raceways that contained the bulk of production rearing, and then in 2015, we had a major retrofit where 10 of those concrete raceways were demolished and the round tanks were installed,” explains Schoenberger. Today, the hatchery has four 20 ft. round tanks and five 16 ft. round tanks for grow-out. Annual biomass is around 11,000 to 12,000 kilograms, but some of that come from other rearing containers.

That 2015 modernization effort, budgeted at roughly $900,000, was focused on reducing energy usage and enhancing operational efficiency. The installation of the circular tanks to replace the fish rearing raceways was projected to significantly reduce water consumption, and thereby reduce water pumping cost.

The aeroboost units installed inside those tanks were key to water-use reduction, says Schoenberger. “We pump atmospheric air into the water through these aeroboost units to supplement the oxygen, so we’re able to reduce water use by between 50 and 60 per cent in each tank. That significantly reduces our water pumping cost, which is one of the major costs at our site here.”

The groundwater water comes at an ideal temperature of 8.7 C in the winter, but this cools to less than 7 C, or closer to six degrees, by the time the fish are released in May.

“Our aquifers are on a six-month delay so we actually have our warmest water in December and January. This makes it difficult to finish off the last few grams of growth to reach target release sizes,” explains Schoenberger. While the water used for incubation could be heated in order to push the fish to grow a bit further, this takes a lot of energy, so the hatchery eschews it.

“We try to get to our target release size using the best husbandry and fish culture practices we can,” says Schoenberger, who joined KTH in 2004 as senior fish culturist.

Besides, “higher temperatures can also lead to higher risk of bacterial infection or other pathogens to establish,” he says. “So the cold water is kind of a curse and a blessing for us. When we don’t reach target size, it doesn’t mean we have inferior fish; the fish are in excellent health, they’re just not up to the size that we like them to be by the time they need to be released into the lake. And that’s not all the time. But one of the challenges certainly is to try and meet those goals by the time for us to release the fish.”

“The improved tank design constantly moves waste out of the system, reducing the time required to clean the tanks. With better access to feed throughout the tank, fish are better able to convert food to body mass, reducing variance in fish size. The result is more consistent, better-conditioned, healthier fish released into rivers and lakes throughout the region,” the hatchery announced following the renovation.

In subsequent tweaks in the years that followed, the hatchery installed other technological innovations that have made processes less energy-intensive and more environmentally friendly. 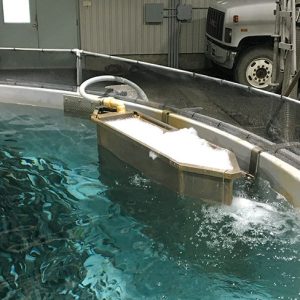 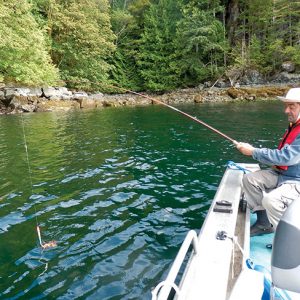 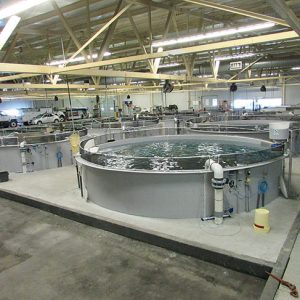 The new rearing tanks that were installed during a major retrofit in 2015 Photo: Kootenay Trout Hatchery

About 75 per cent of the feeding system in the hatchery is now automated. “Our Arvotec feeders are computer-operated, which helps to reduce day-to-day manpower needs and also gives us a much better and consistent feed delivery to the tanks.”

Temperature and dissolved oxygen are digitally monitored in these tanks as well and linked to the alarm system.

“Our water supply systems are controlled primarily by a digital control panel that enables us to turn our wells on and off. Also, in conjunction with that, we have a PLC (programmable logic control) program, which is a panel that will signal any alarms for our system.,” Schoenberger says. “Almost all of our rearing or incubation areas tanks are alarmed in some way whether it’s a low-level in aeration tower or low oxygen in some of the tanks or some kind of failure in the system. We’re alerted through that computer program.”

The alarm system is also linked through the local phone service provider to notify staff of alarms through their cell phones.

The system allows for remote access to the wells. “Most of our wells are several hundred meters from the actual hatchery site but we can actually turn them on off and on inside the building with a click of a mouse,” Schoenberger says.

Variable frequency drives are installed in four of the five groundwater wells, allowing each to only pump the water according to what is needed at a time. “So if we’re only demanding a little bit of water, one of our wells can now pump only as low as about 50 per cent capacity. Whereas in the past, it was either on or off, and it used the same amount of power regardless of how much water is actually needed. So that’s been a huge cost savings.”

The greening of Kootenay Trout Hatchery is an ongoing initiative. And while technology has allowed these innovations at the hatchery, Schoenberger knows they could only do so much without the skills and competences of his team of six full-time staff, a part-time office manager and two seasonal fish culturists.

“Our staff’s ability to weather the storm and willingness to achieve results, regardless of what gets thrown at them whether it’s a low fish run or a pandemic, and our flexibility and the disposition to do what needs to be done to accomplish our goals is fantastic,” Schoenberger says.

“We have a very competent team; each of them has been here for quite a few years – even our seasonal staff. We’ve been hiring the same people these last four to five years. Everybody is well-versed in the systems and our operations from our egg collecting through incubation, early rearing and our releases,” he says.

Related
Editorial: Risk management in the coronavirus era
Global aquaculture facing new norm amid Covid-19
Poll: How is your hatchery coping with the impacts of COVID-19?
Remotely educational