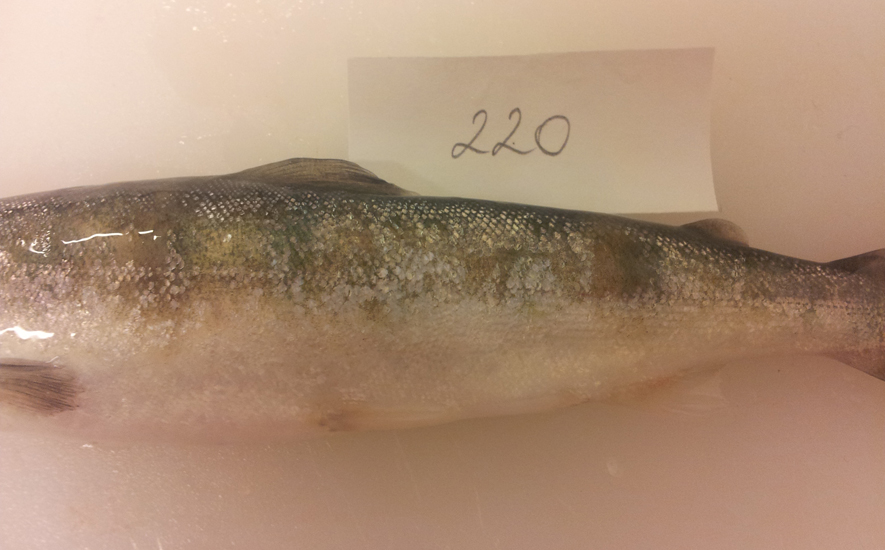 This issue was the subject of a paper presented by Åsa Maria Espmark at the Aquaculture Europe meetings held recently in San Sebastián, Spain. Espmark and her colleagues, J. Kolarevic, Ø. Aas-Hansen, J. Nilsson, and L. Speilberg, examined how repeated crowding and pumping of salmon pre-smolts over a period of five weeks in fresh water affected their performance after transfer to sea water. The researchers also examined how sedation (AQUI-S, New Zealand Ltd.) during pre-smolt handling might affect fish performance during the seawater production phase.

• Group 1 – Control, no crowding or pumping, not sedated;

• Group 3 – Crowding and pumping fish once a week for five weeks, not sedated;

• Group 4 – Crowding/pumping fish once a week for five weeks, sedated.

Aqui-S was applied to the tank water at a rate of 5ml/m3 during crowding and pumping following commercial protocol. During crowding the water level in the tanks was lowered until a density of 150 kg/m3 was obtained, and after two hours of crowding the fish were pumped to a tank empty of fish and back to the original tank. Pumping lasted for 40 minutes.

After four of the five weekly treatments five fish were removed from each tank (i.e. 15 per treatment), killed by percussive stunning, weighed and measured; blood samples were taken for glucose, lactate, and chloride analysis.

The fish were examined for scale loss and skin damage using a three-point scale: 0=nothing; 1=some; 2=severe.

There were no mortalities attributable to crowding and pumping during the freshwater phase of the experiment, however fish subjected to five weekly treatments had higher concentrations of glucose and lactate than control fish at each treatment.

Transportation increased the levels of glucose among the fish, and surprisingly the sedated fish had the highest levels of glucose. Levels of lactate did not increase with transport, but sedated fish showed significantly lower levels of lactate both before (fish from truck sampled before departure), and after transport (fish sampled immediately after arrival). This is currently being evaluated. Scale loss increased as a result of transport; however sedation had no influence on scale loss.

After three months in sea cages there was a slight but significantly higher accumulated mortality among the treated fish (crowded/pumped) than in the controls. There were no differences in specific growth rate (SGR) among the groups, however at the termination of the experiment the remaining treated fish were smaller than the non-crowded/pumped fish, and the handled fish had significantly more severe scale loss than controls:

This experiment followed a previous experiment where long-term effects of pumping and crowding were investigated, and where the fish were subsequently on-grown in tanks. In both experiments fish were significantly stressed by the crowding and pumping. In the first experiment crowded/pumped fish also had higher levels of cortisol after all weekly treatments. However, in the second study sedation prior to and during crowding and pumping clearly reduced stress levels. Behavioural observations of the sedated fish showed that they swam and behaved similarly to the control fish, but did not burst swim.

In both experiments plasma chloride showed that repeated crowding and pumping during freshwater phase reduces their ability to smoltify. In the first experiment the reduced smoltification was even supported by impaired Na/K-ATPase activity over the gills.

Both experiments also showed that scale loss and wounds were significantly more severe in crowded and pumped fish compared to control fish and the difference increased with time during the freshwater phase.

The three month-long sea cage phase revealed that the scale loss and developing wounds observed during the freshwater phase had long term effects on survival and performance. In the previous experiment it was seen that the control fish experienced high mortality following transfer to sea water, and it was concluded that some handling of fish may adapt them to the coming handling associated with the transport, provided the handling does not cause severe effects.