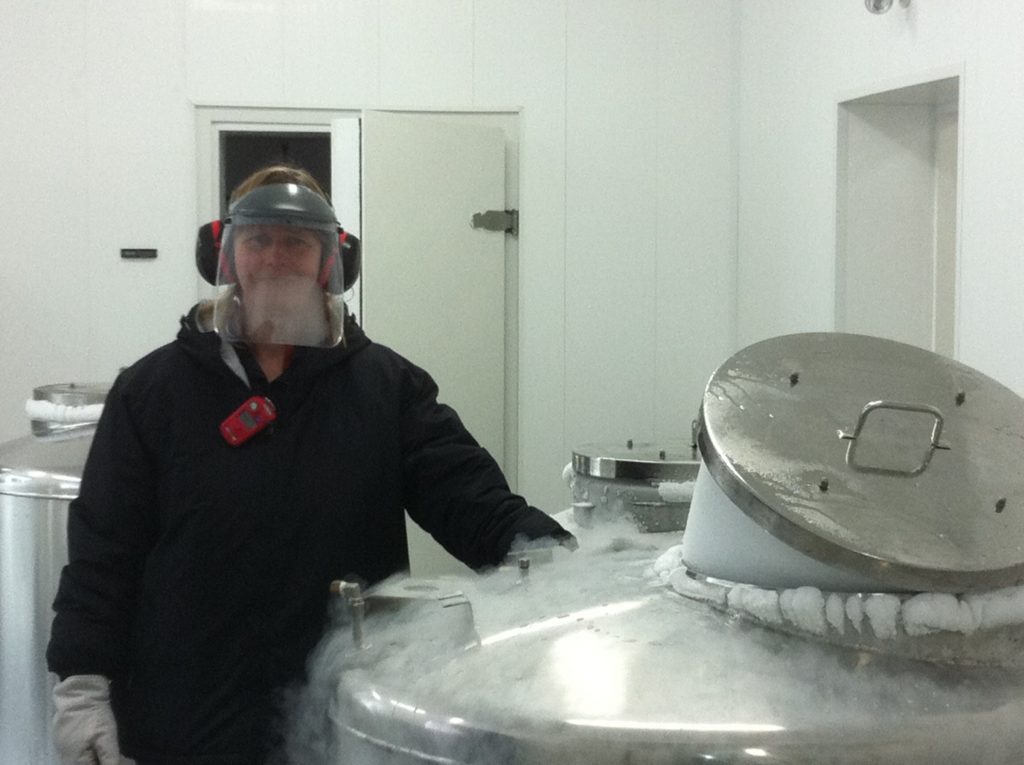 They’re downstairs, in a spotless, white, windowless room in a converted barn – a location straight out of a science fiction film. Large, bulbous Dewar flasks squat in silent ranks along the floor, each one containing the treasures of a single client. Inside the flasks sleep millions – perhaps billions – of fish sperm cells, all held in the 21st Century equivalent of suspended animation.

But here in the fish milt storage facility at Canada Cryogenetics, Ltd. in Campbell River, BC, it’s no fiction. The art and science of freezing and thawing living cells has come of age. Today, fish farming companies, government research organizations and universities are finding a new and powerful tool to improve broodstock, make production more cost-effective, and bank genetic material for the future.

Along with freezing and storing gametes, adaptations of the “animal model” from agriculture have important implications for the seafood industry and conservation alike, just as they have transformed reproduction practices in agriculture, horse racing, pet breeding, medicine and forestry. As biology and genetics continue to hook up with new methods of data management and statistical analysis, life down on the farm, up the river and around the planet is about to go “cryo-genomic.”

“Yes, it’s new technology,” says Maureen Ritter, manager of Canada Cryogenetics’ Campbell River facility. “Some people are really open to it, and some are not so open. Coming from a hands-on, fish-rearing background, I can see the applications and the cost-savings.”

Ritter’s employer, a subsidiary of Cryogenetics AS of Norway since 2010, has seen three years of steady growth, providing services like cryopreservation of fish milt and storage of frozen milt, along with a few innovative products, to its expanding list of clients.

The parent company has pioneered many developments over the last 20 years, and now operates worldwide in locations close to fish farming areas and government research centres. In March of this year, the company announced the opening of its World Fish Reproduction Centre in Hamar, Norway. According to the firm’s website, the Hamar facility “aims to become the leading centre for initiating development of fish reproduction technologies.”

“The technology is there,” says Maureen Ritter, “and everybody is figuring out how they will apply and develop models that work.” By “work,” Ritter means the technology has to be affordable, reliable, and effective. It also has to improve the bottom line…or why bother?

There is already room for manoeuvring in the freeze-thaw game. Bruce Swift, owner of Tri-Gen Fish Improvement Ltd. in Ponoka, AB, Canada, has been working with the genetic information and mathematics side of fish improvement since the early ’90s. Swift, back then a fish farmer and graduate student, worked with Dr. Ray Peterson from the University of British Columbia in Vancouver, BC, and fellow student Lorne Dunn, a swine specialist. They started looking at “branding” of animals being reared as food; Swift focussed on fish.

In the mid-’90s, he launched Tri-Gen Fish Improvement, Ltd. to develop selective breeding programs for fish based on an animal model that tracks individual identities, specific traits and family performance through the generations. Tri-Gen develops breeding programs that enhance the ability to improve stocks over time. While these strategies have been in use for decades in agriculture and forestry, aquaculture has been somewhat slower to “think agriculturally.” Swift thought it was about time that changed.

One of the difficulties with fish, especially anadromous fish, is that you have to wait years for gametes from each year class. In addition, severe restrictions on movement of fish or their gametes around the globe have made access to new genetic material scarce and sporadic. If companies want to improve performance qualities such as growth rate, grilsing rates or survivability, they need to have their own broodstock development programs.

It’s expensive. Aquaculture operations have to establish and maintain multi-year families of adult male and female bloodstock, in which reside a library of preferred genetic traits. It is from these that growers work to optimize genetic recombinations through deliberate crosses, keeping the best performers and breeding them for constant improvement, or combining them to create “hybrid” production animals. Despite good husbandry, stocks held over time can be lost to natural life cycles, disease or unforeseen calamities. Formerly, no matter what, you needed both parents to produce gametes, and the gametes were a one-shot deal. Losing broodstock meant losing years’ worth of genetic capital. And it was costly keeping all those big, valuable fish around.

Bruce Swift saw clearly the advantages of cryopreservation. The people at Cryogenetics AS were starting to achieve fertilization rates of 80 to 90% with frozen milt, their new CryoPacks could store far bigger volumes of milt than the classic “straws,” and they were developing new additives (the AquaBoostTM System – see sidebar) to optimize the performance of fresh and thawed sperm. Now Swift had the tools he needed. Currently, he works with numerous fish farming companies in North and South America to design, set up and maintain broodstock improvement programs, primarily in salmon.

Backing up the data

In a broodstock improvement program, Swift explains, fish are PIT-tagged at about 10 grams and then sampled from the general population throughout the life cycle. Recorded data may include weights, survival, and other parameters. The top selected males – the best performers – have their milt cryopreserved as elite members of the “nucleus” broodstock families.

“If we lose the fish, we’ll still have the genes and the pedigree,” says Swift. Those families provide the nucleus for the next generation’s broodstock and selected gametes for production, all of which must be tracked and analyzed. The amount of data is huge, but new computer software is well able to handle the storage and the statistics. Swift explains that the focus tends to be on milt: sperm-borne DNA can be spread over much more territory and is easier to preserve and store. “Therefore, we get much more genetic gain by concentrating on the males,” he says.

You still have to keep live females around to produce eggs and complete the equation, of course. And, says Swift, it is still valuable to bring in new genetic material occasionally, to add diversity.

Kyle Martin is a geneticist with Troutlodge, Inc. of Sumner, Washington in the United States. His firm is the world’s leading, year-round producer of eyed salmonid eggs and live rainbow trout for stocking, with facilities in Washington state, Chile, Isle of Man, Hawaii and Florida.

Having worked with cryopreservation technology for years on a research basis, in cooperation with the University of Washington, the firm has recently begun using it for gene banking some 150 to 170 families of four different stocks that breed at different times of the year. “Gene banking is our backup, in case of catastrophic failure of some of our brood nucleus,” Martin says. “It’s an awesome technology to have available to protect the work we’ve done in developing our broodstock.”

Neither Ritter nor Swift is content to stop there. And they are not the only ones whose vision of the near future holds even more possibilities for cryo-technology in aquaculture. “We’ll be able to go in at any time and look at all the males we’ve preserved,” Swift says. “We can go back to recover lost alleles that weren’t selected for in the first place – perhaps colour or disease resistance – even in milt that was stored using the old straw technology.”

He is very excited about carcass analysis these days, too. Some of the analyses routinely done on production animals in the meat industry are likely transferrable to aquaculture products, he believes. “It’s unreal what they do with swine and beef.” Using near-infrared technology, genotyping and other techniques, farmers will soon be able to evaluate and track market traits such as texture, oil content, body form, pigmentation and nutrient profiles, and build improvement of these traits into their breeding programs.

Ritter envisions a business model in which frozen milt can be health tested and certified. This would facilitate worldwide exchange of genetic material, improving access to the diversity needed to sustain breeding programs over time. As more species are brought into the repertoire, such as sturgeon, Arctic charr, and most recently, zebrafish (used as a model organism for biomedical research), the marketing of selected gametes could become a valuable adjunct to farming for food – a sort of “stud book” for fishy champions, complete with stud fees and royalties.

Jørn Ulheim, Managing Director of Cryogenetics AS, is a pioneer who has ridden the wave of developing cryo-technologies and who sees deeply into the possibilities for future applications in aquaculture.

“The combination of a good breeding program and effective up-scaling of the selected genes may reduce production costs in all fish types significantly,” he says. “In addition to fluctuating prices of fish, disease outbreaks are the single most loss-causing factor in most aquaculture production. Improved disease resistance, either through conventional breeding programs or Quantitative Trait Locus (QTL) screening, will gain a lot of focus in the years to come.” QTL addresses the issue of valuable traits that are controlled by more than one site in the DNA of an organism, and therefore are inherited in a more complex way than single-locus traits.

According to Bruce Swift, cryogenics offers a tool for estimating the genetic value of certain traits more accurately. Milt carries information from generations back, Swift explains. The more you can estimate the genetic value of a trait under different environmental conditions with different animals over several years, the more accurately you can build a kind of “selective index” based on traits known to affect the bottom line. These include growth rate, which affects opportunity cost. If fish are ready for market several days earlier, on average, this increases the average number of harvests per year, with the effect of multiplying the profit at each cycle.

If certain other traits enhance production, quality, price or sales, the economics of storing frozen milt, accumulating data and doing the math become more attractive. Then more and more growers, including the shellfish and shrimp industries, will find creative ways to leverage the benefits of these techniques in their operations. It may be new, but if it works, and it pays, they will come.