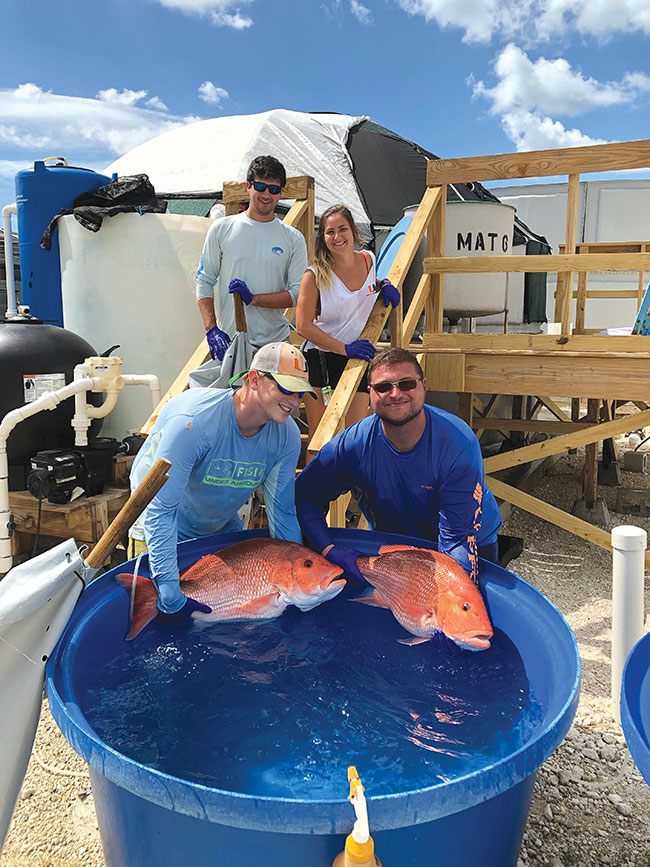 UM Aquaculture Team handling red snapper broodstock that have been successfully conditioned to spawn volitionally on and off season, producing tens of thousands of fingerlings and juveniles. (Credit: Dan Benetti, PhD)

The University of Miami in Florida has successfully conditioned red snapper (Lutjanus campechanus) broodstock to spawn volitionally on and off season, producing tens of thousands of fingerlings and juveniles. This development has sparked interest in the possibility of raising the “American” species commercially for the first time, in the U.S. or elsewhere.

“Our hope is to cultivate the expansion of this interest and, ultimately, facilitate the development of farms dedicated to raising the species specifically,” Charles McGuigan told Hatchery International. He is a member of the UM Aquaculture Team behind the breakthrough and a PhD student at the University of Miami, Rosenstiel School of Marine and Atmospheric Science.

Over 10,000 fingerlings have been provided to UM partners and private growers around Florida. The farms typically grow other species of red snapper.

“There has been a great deal of excitement from these groups about the possibility of continuing to raise red snapper moving forward because it is such an iconic species in the U.S.,” said McGuigan.

Clearing the choke points
The team believes there are no fish farmers in the U.S. or other countries growing the American red snapper. “There are farms producing other snapper species in the Americas, but none of them are native to the U.S.,” he said.

Inconsistent spawning and difficulties in larval rearing have been identified as choke points on the progress towards the development of reliable hatchery technology for red snapper. The team delved into the effect of photoperiod on growth, development, feed consumption, and survival of the species.

“Photoperiod has been shown to be one of the most influential environmental variables in the larval rearing of marine finfish. The effects are species-specific; some species may grow more quickly and eat more prey items when exposed to a longer duration of light, while the opposite may be true for other species.

“The same rationale is true of the swim bladder; while some larval finfish accomplish swim bladder inflation when exposed to punctuated periods of darkness, in others, a longer period of illumination cues inflation more effectively. Ultimately, survival is the most important outcome in any larval rearing and it can be influenced by all of the factors mentioned above,” he explained.

Proper buoyancy
He stressed the importance of the swim bladder, which regulates buoyancy. Proper buoyancy control helps larval fish feed. It likewise allows it to remain

oriented properly in the water column, keeping it from encountering any additional pathogens that tend to accumulate at the bottom or walls of the tank.

The study also demonstrated that red snapper can be raised solely on rotifers from first feeding through early larval stages, which he considered to be “extremely important from a commercial perspective,” not only for red snapper but for all marine finfish larva.

“Our ability to demonstrate the viability of rotifers is a major hurdle for the development of a red snapper industry in the U.S. and elsewhere,” he said.

Past laboratory experiments had relied quite heavily on copepods. While it is suitable for research purposes, the cost for commercial operation could be substantial because copepods are difficult to raise in high densities and, consequentially, cultivating large quantities becomes very expensive.

Results
Trials were conducted using 24 and 18 hours of full-spectrum light. Total survival across treatment groups through 12 days post-hatch (DPH) was 66 percent; survival was 31percent at 26 DPH, and final survival at 45 DPH was 5.5 percent.

McGuigan said, “Compared with other labs that have worked with red snapper in the past, our survival rates are among the highest that have been achieved.”

The project received funding from the NOAA-Sea Grant project for marine fish aquaculture development in the U.S.