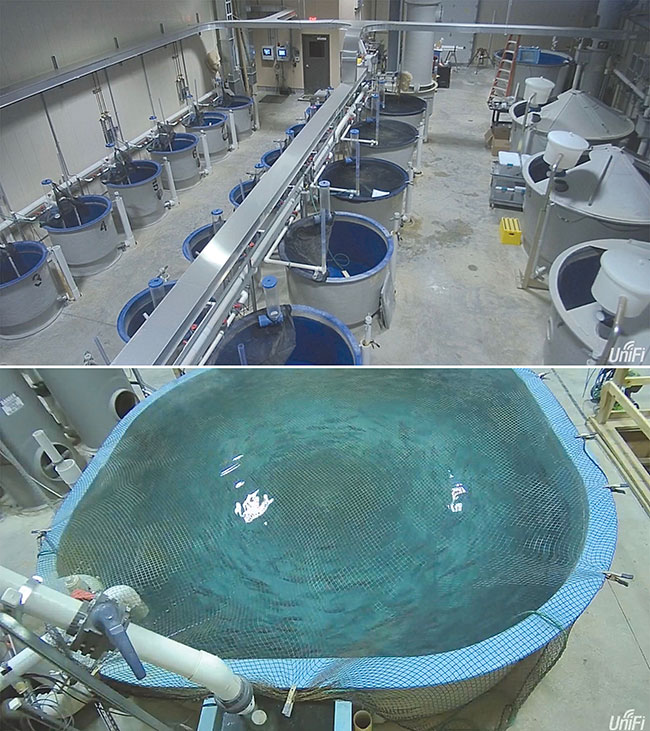 Most of you are probably familiar with Murphy’s Law, which implies that if something can go wrong, it likely will. This commonly used adage is not all that scientific, but it is a reasonable mindset to have when operating recirculating aquaculture systems (RAS). With more than three decades of fish production research, the Freshwater Institute (FI) has certainly encountered our share of unforeseen circumstances. Standout incidents recounted by our longest tenured employees include: a week-long power outage, a burst underground supply pipe that spouted water like Old Faithful, and a tree falling on the main pumphouse that just missed the electrical and pump control panels. Other more common emergencies have included power blips, pump failures, drum filter problems, leaky pipes, and partially clogged oxygen lines, to name a few. With these experiences under our belt, FI staff will be the first to admit that Murphy’s Law undoubtedly applies when it comes to operating RAS. However, the FI team also takes pride in the fact that catastrophic loss of fish has rarely occurred at our facility despite these emergencies.

You might wonder then, how we have generally avoided catastrophe amid these challenging circumstances and over such a long period of time. When polling our fish production team, the most common answer was: effective emergency response. Effective emergency response begins with well-trained and knowledgeable staff who are willing and able to respond to alarm situations in a timely manner – day or night. Dedicated personnel are essential to the process; however, successful emergency response involves much more. It is a holistic process with many interconnected parts including monitoring systems, planning protocols, and system design elements. Specific components include, but are not limited to, identifying areas in RAS where problems might occur, integration of trustworthy alarm systems, backups, redundancies, preventative maintenance, and development of standard operating procedures for specific emergencies.

The following sections overview the key components of FI’s emergency response program that have been integral to our success.

Water flow and dissolved oxygen alarms
Within every RAS, two key elements are critical to fish survival: 1) sustained water flow, and 2) maintenance of acceptable dissolved oxygen levels. Significant disruption of either can quickly result in mass mortality in high-density fish populations. Departure from these important operating conditions can happen for a variety of reasons. For example, loss of typical water flow can be caused by pump failure, power outage, leaking pipes, or incorrect use of valves or standpipes. Low dissolved oxygen typically follows; however, oxygen deficiencies can also result independently from oxygen leaks, O2 inlets that become clogged with debris, or incorrect adjustment of gas flows.

Accordingly, each RAS at FI is equipped with alarm capabilities that rapidly alert us to these emergency conditions. Associated equipment includes water level float switches strategically located in sumps, and sensor-based systems that continuously monitor oxygen levels. Several monitoring systems are utilized at FI, each of which offers a selection of alarm setpoints. When an undesirable oxygen level is sensed, a relay changes state, and an alarm is sent to a dial-out system. A solenoid valve is simultaneously activated, and backup oxygen immediately flows to submerged diffusers to keep fish alive while help is on the way. 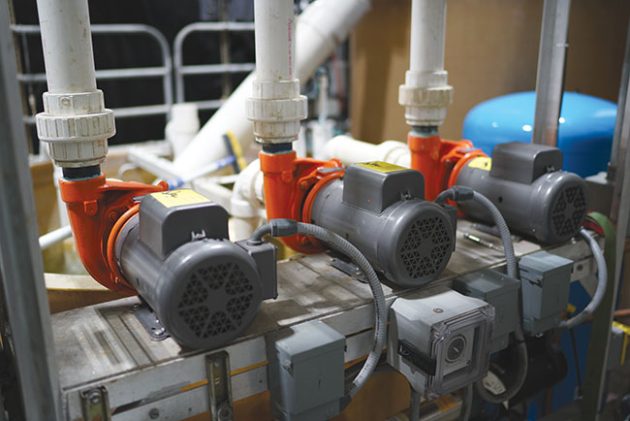 Pump redundancy provided in FI’s partial RAS where a maximum of two pumps are operated and the third is wired as a backup. 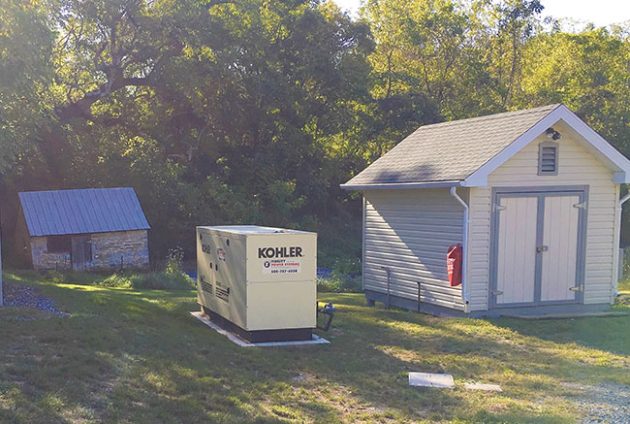 A backup generator that supports FI’s pumphouse and one fish production laboratory.

Alarm system and multi-personnel response
Each dial-out system includes a voice programming feature that allows input of the type of alarm (e.g., water level or dissolved oxygen), and in most cases, the precise location where the problem exists (e.g., fry, fingerling, or growout system), which provides important information to the first responder. Once an alarm is received by the dial-out system, it begins to call a series of mobile phone numbers including those of all fish production and operations staff, none of whom live onsite. Of the personnel receiving the call, rotating responsibility for emergency response is delegated to one individual who is assigned to alarm duty that week. Nevertheless, because approximately six people receive the call, a series of communications follows to ensure that the person on duty is tending to the alarm, and to determine if additional help is needed. Response to critical emergencies always begins with prompt resolution of water flow and/or oxygen deficiencies; however, exact response varies depending on the circumstances. Therefore, responding personnel must be well trained on a range of standard operating procedures.

Redundancies and backups
In addition to call receiving redundancy, other overlapping features and backups are included around our facility. For example, generators that support each fish production building are wired to provide backup power to all RAS in the event of a power outage. Generator startup and power transfer are tested weekly to ensure optimal function when it is needed the most. Other redundancies are integrated within each RAS including a secondary pump that is wired to start if the primary water recycle pump fails. Preparation for emergencies also extends to the supply shelf. Extra pumps, drum filter motors and gearboxes, blowers, and miscellaneous parts such as solenoid valves, relays, and plumbing supplies are always kept in stock. Moreover, FI’s operations team follows a preventative maintenance regimen that requires regular service of mechanical system components, a process that eliminates certain emergencies before they happen. Storm preparation is also important and typically involves advance testing of alarms and backup systems, and under the worst expected circumstances, a temporary halt to fish feeding.

Alarm anomaly
Over 30 years of RAS operation, the FI team has been successful at keeping fish alive and healthy amid the most challenging circumstances. In fact, we have only experienced one incident (circa 2000) that resulted in significant loss of fish. Following this event, we evaluated the source of the alarm failure and upgraded our systems to prevent future issues. Since that time, we’ve also added a single analog backup phone line, which allows us to receive calls if our digital phone link fails. More recently, we bolstered our capabilities by adding webcam and data monitoring systems that can be proactively viewed on cell phones and home computers via our VPN internet connection. Realtime video provides an extra level of monitoring in addition to computer screens that remotely detail existing dissolved oxygen concentrations and water level status.