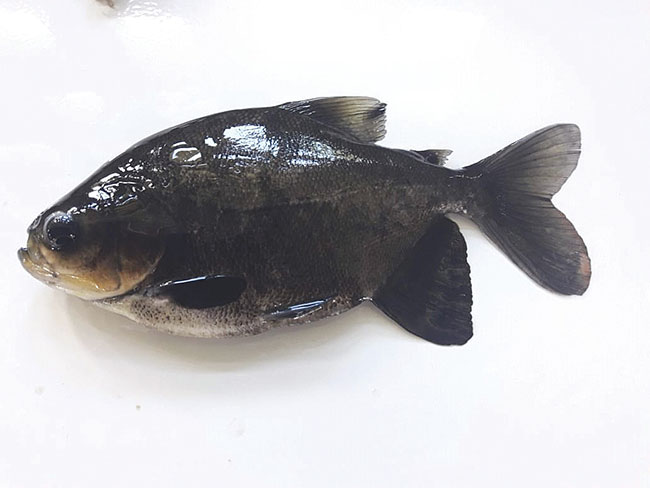 Researchers in Brazil are recommending an eight per cent replacement of whole banana meal (WBM) in cornmeal in the practical diet for tambaqui (Colossoma macropomum) juvenile.

Determination of digestibility is one of the most important aspects in evaluating the use of different ingredients for fish nutrition.

Copatti is the author of “Effects of whole banana meal inclusion as replacement for corn meal on digestibility, growth performance, haematological and biochemical variables in practical diets for tambaqui juveniles (Colossoma macropomum),” conducted at the Federal University of the San Francisco Valley in Brazil.

The recommended diet reduces the elimination of nitrogenous residues from the fish, contributing to improvement of water quality and fish welfare, and reduction in the production costs.

“In an integrated view, this can result in savings for the fish farmer and improved cultivation conditions for the species,” Copatti said.

Corn comprises 10 to 40 per cent of omnivorous fish diets in Brazil, where its price has increased and public stocks reported in consumer regions have decreased.

“Thus, there is a greater stimulus in the search for alternative food sources that can complement and maintain the fish productivity without harming their zootechnical performance and health,” he said.

Eight to 32 per cent whole banana meal replacement in cornmeal could represent half the cost of using corn, he said.

Brazil is among the world’s top producers of banana, which is rich in potassium, crude fibre, proteins, amino acids, vitamins and poly-unsaturated fatty acids.

High wastage is associated with the fruit. According to FAO 2015 data, fruit and vegetable losses in South America were at 40 to 50 per cent. “This high waste, when evaluated together with the high perishability of the banana, demonstrates that there is a large supply of unused banana for human consumption that could be used as food in aquaculture,” Copatti said.

Experimental diets had zero per cent, eight per cent, 16 per cent, 24 per cent and 32 per cent whole banana meal replacements. Banana contains anti-nutritional factors, which may impair fish nutrient metabolism and health.

The study was published in Aquaculture Reports.