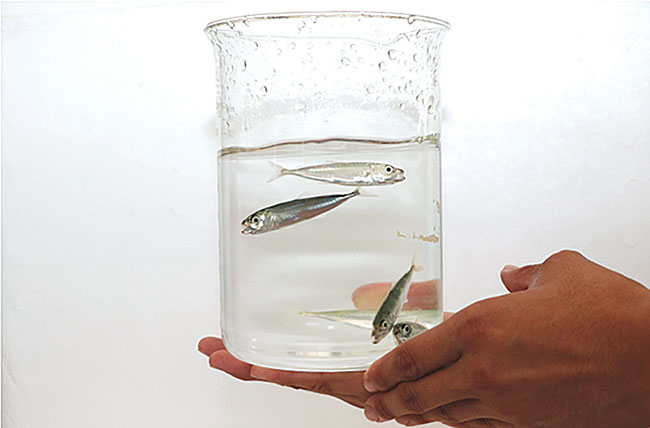 Some of the world’s first captive-bred round scad 48 days after hatching, at the Southeast Asian Fisheries Development Center Aquaculture Department (SEAFDEC/AQD) in the Philippines. Photo: JF Aldon

The promise of farming round scad (Decapterus macrosoma) has started with the successful spawning of the species in captivity – a world first – at the Southeast Asian Fisheries Development Center, Aquaculture Department (SEAFDEC/AQD) in Iloilo, Philippines.

The research on round scad, funded by the government of Japan, is part of the five-year study on development of new aquatic species for promotion and creation of local aquaculture industry. The study started in 2020.

Locally known as galunggong, the Philippine staple that is so popular that the Galunggong Price Index serves as a quick reference for Philippine inflation rates.

“This fish was never maintained in captivity thus, maintaining the wild caught breeders, spawning in captivity and larval rearing were carried out in this species and were considered important factors to highlight in this research. Survival of this fish during larval rearing is comparable to other marine fish and perhaps may be higher when appropriate protocols designed for this species are established,” SEAFDEC/AQD researcher, Ma. Irene Cabanilla-Legaspi, explained to Hatchery International.

“As observed in the previous trials, the harvestable size of galunggong during the hatchery stage is way bigger compared with other marine fish which can be obtained only in less than a month of rearing.”

Broodstock collected from the wilds in October 2021 started laying eggs in December 2021 and continued to do so through February.

Among others, it is hoped that farming of the species would create a steady supply for demand and ease importations. And lead to a stable, affordable price. Needless to stress, the expectations from the research are very high. But it will take quite some time to deliver these.

The research on the species is still in the early stage, Cabanilla-Legaspi said, and there are still a lot of work to do.

“This is a five-year project and starting a new aquatic fish species for aquaculture entails a lot of experimental trials, verification, demonstration and finally recommendation for commercialization,” she stressed.

Fry would be available for commercial-scale production only once the protocols for production techniques for hatchery, nursery and grow-out are established and show acceptable results in terms of survival rate, growth rate, and adaptability to various culture conditions.

“This study also takes economic analysis into account in order to produce a profitable outcome for farmers. Then we can say that this species is suitable for commercial-scale production.”

She cited another SEAFDEC breakthrough in the 70s and 80s in the Milkfish culture. This took several years in developing broodstock technology, completing the life cycle in captivity, formulating effective larval and broodstock diets, and coming up with the treatment in case diseases occur.