The Wild Rose Fish Hatchery in Wild Rose, Wisconsin, in the U.S., has developed an exhibit dedicated to the long history of the lake sturgeon (Acipenser fulvescens) in the area. 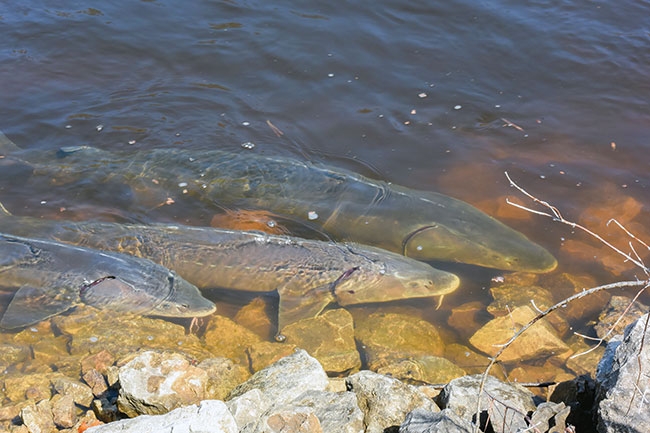 Hatchery staff hopes that the interactive display will inspire interest in the welfare of the species and the efforts of the hatchery and other parties to help with population recovery over the years.

The hatchery has been stocking fish for Wisconsin lakes and rivers since 1908. Naturalist Guide Joan Voigt says that on the hatchery’s 100-year anniversary, the facility was renovated and updated into the most state-of-the-art hatchery in the Midwest. The lake sturgeon exhibit draws on the hatchery’s long history and beyond.

“We are celebrating Wisconsin’s largest and longest-lived fish, and the people that have protected it over ancient times,” says Voigt. “The Menominee tribe and Sturgeon for Tomorrow have worked with the Department of Natural Resources (DNR) in gathering information and pulling this exhibit together.”

Voigt says that Wisconsin has been instrumental in continuing the heritage of the species. Lake sturgeon have lived in lakes and rivers for 100 to 200 million years and co-existed with dinosaurs. The fish can grow up to seven feet long and can live up to 150 years.

The display includes a detailed history of the lake sturgeon. Before Wisconsin became a state, Native American tribes in the area had honored and revered the sturgeon. In the 1900’s, European settlers built dams which prevented them from migrating to spawning beds. Between that and pollution, their numbers were reduced to 10 percent. But in the years since, the state has taken an active role in protecting the species.

“The Sturgeon for Tomorrow group has done a lot to encourage monitoring the harvest and offering a season of hook and line, for growing healthy populations, once the populations have been restored,” says Voigt. “In locations where sturgeon populations were not as strong, the DNR and partners were working to rebuild those populations, and our fish hatchery had a significant role in the restoration project.”

The exhibit also includes a variety of visual components, including touch screen displays and a pen where visitors can interact directly with a sturgeon. Voigt hopes that the display will help visitors better understand the efforts of the hatchery and their partners in raising lake sturgeon.

“Wisconsin has been really the only area that’s been able to have success in reproducing in an artificial setting,” says Voigt. “Some other states actually come to us, where their sturgeon populations have been devastated. We’d like to educate people about the value of these fish, and that they’re some very important species, not to take lightly, that they could be replaced easily – that doesn’t happen easily.”

As part of the promotional effort, the hatchery held a lecture series throughout September and October, including a DNR biologist, representatives for Native American tribes, graduate students from the University of Wisconsin with specialization in sturgeon populations and biology, and a representative for Sturgeon for Tomorrow.