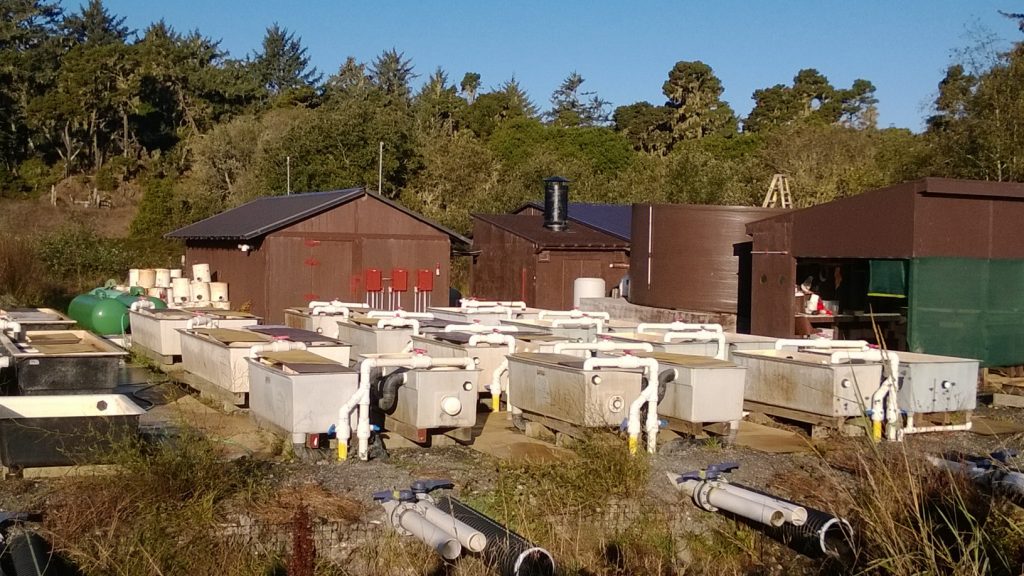 Taylor Shellfish and other hatcheries in Washington and Oregon states have been making progress as they work with university and government scientists on the problem of ocean acidification.

Taylor Shellfish in Washington state is circumventing the effects of ocean acidification – thanks in part to expanded hatchery facilities in Hawaii; units for juveniles at a de-commissioned pulp and paper mill in Humboldt Bay, California; and state officials who are paying attention.

Company spokesperson Bill Dewey told HI that Taylor Shellfish now has three 30-bin flupsies (floating upwelling system) in operation at the Humboldt mill site. Though the bins in each unit are not large, measuring about .75 metres square and little more than a metre deep, each can be filled with large quantities of seed oysters– if the water conditions are right.

The plan is to add three 30-bin flupsies in the coming year, with the eventual goal of 18 flupsies at the site.

The company has already invested $1.5 million in the Humboldt operation to date, renovating and upgrading the Kuiper Mariculture facilities it acquired a few years ago in the bay, as well as ramping up new facilities at the disused mill dock.

Dewey told a recent meeting of the British Columbia Shellfish Growers Association that company personnel at its equipment fabricating shops in Washington state are being kept busy making additional flupsies for installation in California. He indicated that there are many shellfish-growing companies in the Pacific Northwest willing to take any “surplus” oyster seed Taylor makes available for sale.

Taylor Shellfish and other hatcheries in Washington and Oregon states have been working together with university and government scientists on the serious ocean acidification problem in the shellfish aquaculture industry. They’ve made some good progress by keeping a very close watch on seawater chemistry and adding water treatment systems in the hatcheries.

As a result, Dewey said, the hatchery operators have been able to take preventive measures, allowing increased numbers of their shellfish larvae and spat to develop shells and survive that energy-draining process.

He said, however, that the problem now seems to be occurring, albeit in a different form, with geoduck spat.

Dewey explained that with geoduck clams, it appears to be an overabundant ramping-up of aragonite in the water that is preventing the tiny geoduck cells from forming protective shells once they’re fertilized. That causes the ova to develop deformed and to die – usually within the first 48 hours post-fertilization.

For now the hatcheries have discovered that the key to dealing with ocean acidification is keeping a very close watch on several important water parameters, so that action can be taken before the situation becomes too detrimental.

“Monitoring has really been critical, along with ramping up the science,” said Dewey, adding that the state’s shellfish growers and hatcheries have been fortunate in having a governor who saw the problem, recognized its serious implications — not just for shellfish growers but the whole regional economy — and was prepared to tackle it in a scientific manner.