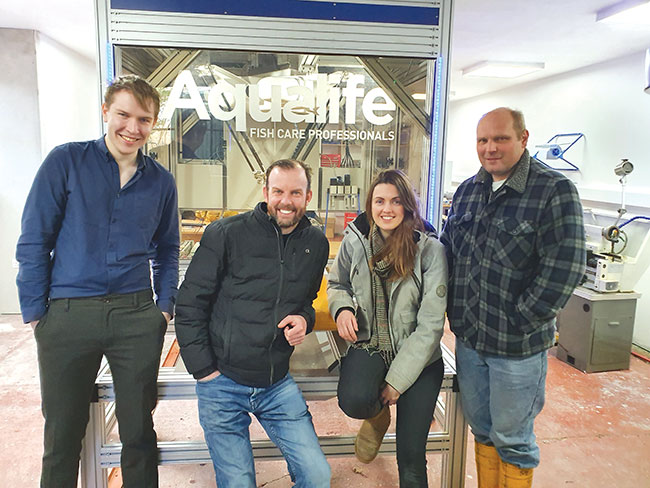 The development of a fish vaccinating robot, equipped to cope with fish sizes as low as five grams, has begun in Scotland with the promise of ensuring that on-farm trials are ready to start by March/April 2021.

The £500,000 ($612,302) design and build project is being undertaken by an in-house team at Stirling-based Aqualife, a global fish vaccination firm that was launched 24 years ago, utilising both manual and machine-based systems.

Aqualife describes its new vaccination robot project as a “transformational” step for the industry. It is expecting the total build to take 18 months with the work starting in March this year.

“While automatic systems already exist for larger fish, our new unit will be designed to handle fish from five to 30 grams,” said chief executive Gordon Jeffrey, adding that it will allow producers to increase productivity by growing their fish out of hatcheries far sooner than is currently possible.

The development of the new robot, to be called Incubot 2, is partly funded by a £250,000 award from the Seafood Innovation Fund. The fund is financed in advance by the Centre for Environment, Fisheries and Aquaculture Science (CEFAS), which is an executive agency of the UK Government’s Department for Environment, Food and Rural Affairs.

“The species we currently have in view for this development are tilapia, trout and pangasius,” said Jeffrey. “We’ve already laid plans for the robot to go into on-farm trials at around this time next year with a major trout producer.”

The aquaculture industry in Scotland aims to double its economic contribution from an estimated £1.8 billion in 2016 to £3.6 billion by 2030, Jeffrey pointed out. He added that to achieve such a goal, producers would need to develop solutions to reduce fish losses, particularly those linked to disease issues.

He also drew attention to the increasing public awareness on fish health and welfare issues, another issue which he believes will be addressed and helped by the development of the new robot.

A project team attached at the Agricultural Engineering Precision Innovation Centre (Agri-EPI Centre) assisted Aqualife in preparing its initial funding bid to CEFAS. Agri-EPI Centre is one of four Agri-Tech centres established by the UK government. It focuses on the delivery of research, development, demonstration and training of precision agriculture and engineering for the livestock, arable, horticulture and aquaculture sectors.

“Our aim is to stimulate collaboration and innovation to support sustainable food production,” said Agri-EPI project manager Phil Cassidy. “The Inocubot 2 project is a fine example of this work and we look forward to managing the project through its development.”