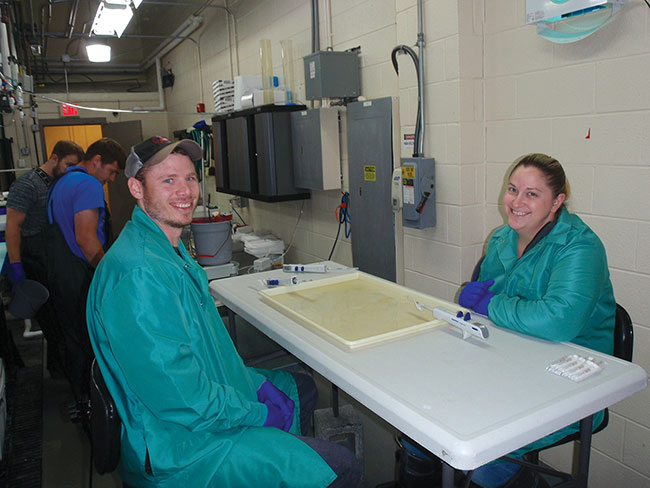 Exposure to reuse water or multi-pathogen challenge in rainbow trout (Oncorhynchus mykiss) production can initiate complex disease dynamics that can overwhelm both vaccination and host genetic resistance, according to a collaborative project between researchers at the United States Department of Agriculture (USDA) Agricultural Research Service at Virginia Tech and the Virginia Institute of Marine Science.

Results from the 27-day experimental period showed that water reuse exposure, genetic line, vaccination, and the interaction between genetic line and water exposure affected survival. Compared to all other water sources, fish exposed to constant reuse water had 46- to 710-fold greater risk of death.

“Water is commonly reused multiple times in trout farming but the impact of this on fish disease resistance has not been studied. We used a unique experimental set-up to replicate trout production conditions to test the effect of reuse water,” Dr. Gregory Wiens told Hatchery International. He is a research immunologist at the National Center for Cool and Cold Water Agriculture, USDA-Agricultural Research Service.

Either spring water or reuse water from raceways was piped to identical tanks housing two commercial lines of trout that had been either vaccinated against infectious hematopoietic necrosis virus or sham vaccinated.

Between the two genetic stocks of rainbow trout used, Clear Springs Food (CSF) and Troutex (Tx), the former might be more resilient to the harmful effects of reuse water. Tx fish had a 2.7-fold greater risk of death compared to CSF fish in constant reuse water. Risk of death did not differ in spring water, indicating that the effect was specific to the reuse water.

“The factors that affect rainbow trout survival in reuse water are complex,” he said. “The exposure of rainbow trout (size 11 to 13 to the pound) to reuse water was clearly detrimental and had a large effect in our study.”

IHNV or F. psychrophilum, major pathogens of farmed rainbow trout, were detected in about 40 per cent of the fish. These pathogens might have caused some of the mortality in the study. Presence of other factors or stressors in reuse water are also suspected.

“Vaccinated fish had limited survival improvement compared to sham-vaccinated fish in reuse water,” he said. “However, in our laboratory study conducted in spring water, vaccination was highly effective in both lines of fish against IHNV challenge. In contrast, when we co-infected with both F. psychrophilum and IHNV at the same time, we were able to cause high mortality in vaccinated fish.”

The CFS fish line is a result of selective breeding of rainbow trout for resistance to INHV has been implemented at CSF since 2000 as part of a multi-trait selection program.

The Tx line has undergone selection for a number of years in Denmark and consists of five mating groups with ongoing breeding objectives to increase growth, body shape and yield, and improved survivability under farm conditions.