Norwegian firm Salmon Evolution is a giant step closer to realizing its plans to build Europe’s largest land-based salmon farm with the recent acquisition of a property at Indre Harøy in Fræna, Norway. 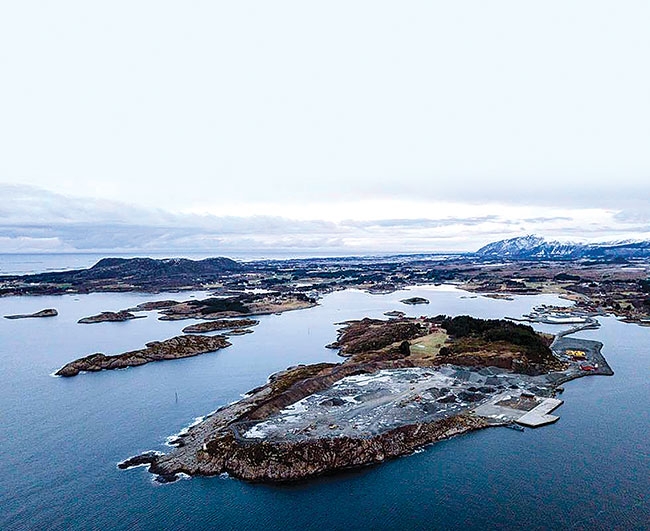 The industrial site is currently owned by Fræna local authority, and is partly a quarry and undeveloped land zoned for commercial development, according to Salmon Evolution. The land will be the future development site of the company’s planned flow-through salmon farm.

“This is an important milestone, and fully in line with our timetable for realising Europe’s largest land-based fish farm,” said Kristofer Reiten, chair of Salmon Evolution. He describes the strategic and structural conditions as optimal for developing a land-based aquaculture facility.

“We have unlimited access to clean and fresh seawater, adequate electricity supplies, our own deepwater quay and opportunities for expansion and growth. In addition, we are optimally positioned in terms of distance to market,” Reiten said in a statement.

“It’s very gratifying that the company is now ready to take the next step,” said Anders Skipenes, chief administrative officer at the local authority. “Salmon Evolution’s project at Indre Harøy will make an important contribution to building a national powerhouse for seafood production. The new Hustadvika local authority could scarcely have got off to a better start in terms of forward-looking industrial development.”

Early this year, Salmon Evolution announced it has raised NOK50 million (US$5.7 million) through a private placement. This capital infusion will help finance the first phase of construction of the land-based farm, as well as to fund “organizational development and the appointment of key personnel.”

Estimated cost for the entire project is NOK3 billion (US$367.2 million).

Salmon Evolution plans to build its land-based salmon farm using flow-through system with CO2 aeration. The company’s chair Reiten calls the concept, “sea-based aquaculture on land.” The planned salmon farm is expected to have an annual production capacity of 28,800 metric tons, and a maximum standing biomass of 13,300 tons.