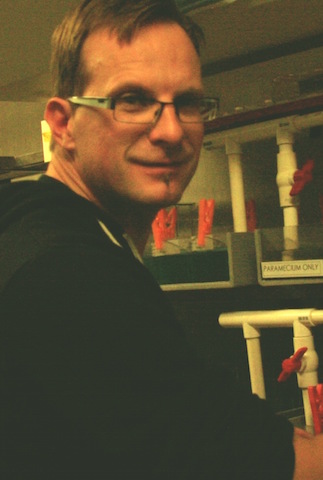 A combination of genetic and embryonic amenability has placed zebrafish at the forefront of attempts to understand how genes function in controlling vertebrate development. Approximately 80% of zebrafish genes have a direct counterpart in humans.

If you read that a particular hatchery in Australia was the largest of its type in the Southern Hemisphere what species would you think it was spawning?  Would you have guessed zebrafish (Danio rerio)?

This tropical freshwater fish, popular with the ornamental industry and an important species for biomedical research, is produced at the Australian Regenerative Medicine Institute (ARMI). Based at Melbourne’s Monash University, the Institute meets its own needs and those of external biomedical researchers who use the genetically-modified and mutant strains to model a variety of human diseases and conditions.

A combination of genetic and embryonic amenability has placed zebrafish at the forefront of attempts to understand how genes function in controlling vertebrate development. Approximately 80% of zebrafish genes have a direct counterpart in humans. The optical transparency of the zebrafish embryo provides the ability to visualize every cell by simple optical inspection, as well as enabling the use of host-cell labelling and transgenic approaches to dissect embryonic development.

The large-scale mutagenesis of the zebrafish genome has also produced different classes of mutations that disrupt gene function. Zebrafish have been used in research for more than 30 years. However, no thoroughly homogenous inbred strain exists yet. A number of laboratory-derived standard strains are used.

The Institute’s commercial arm is FishCore, which offers a range of scientific services including training and access to sophisticated microscopes, but their main business is the production of zebrafish embryos and strains for domestic and overseas research facilities.

Zebrafish live from 2-4 years and are uncomplicated to breed in captivity. They are sexually mature by three months and don’t reproduce much after two years. Spawning is practically continuous. They are serial breeders and will lay between 100-300 eggs in one session, and are bred weekly to maintain high productivity. Although the fish are slightly more fecund at higher temperatures, FishCore Manager and Research Group Leader, Dr. Jan Kaslin,

said that they have found a constant temperature of 26-27ºC — taking into account management, cost and fish health issues — gives the best overall outcome.

Adult fish are kept in 3-l broodstock tanks each holding around 20 mixed gender fish that are exposed to a 14-hour daylight cycle. Each day 30-40 breeding pairs are stocked in 1-l divided spawning tanks where males and females are separated. The dividers are removed the next morning and spawning typically commences within 15 minutes. Zebrafish have high egg production rates and females should be continuously cycled through the breeding program in case they have only partial egg-resorption, in which case their reproductive mechanisms can be compromised.

The eggs are removed and placed in incubation containers in a solution of E-3 media or egg water (recipe: www.zfin.org). The eggs hatch after three days, and larvae swim actively and catch prey at day five. The larvae are fed paramecia: 100µm, elongated ciliate zooplankton produced at the hatchery. After 21 days the juveniles are fed a mixture of paramecia and brine shrimp (Artemia). Manufactured food is introduced when the juveniles are one month old. Zebrafish become sexually mature after three months. Adult fish are fed brine shrimp and manufactured pellets.

The facility has recently expanded their repertoire by adding axolotls (Ambystoma mexicanum) and epaulette sharks (Hemiscyllium ocellatum) to their catalogue. The axolotls (a.k.a. salamanders, or Mexican walking fish) are used for research into regenerative biology. Like most amphibians they can regenerate just about any tissue or organ of their body. Genetically they are a link between fish and land animals.

Epaulette sharks are a species of long-tailed carpet shark. Usually around a metre in length, they

are nocturnal, found mainly in the shallow waters of tropical Australia and New Guinea. Epaulette sharks have evolved to cope with severe oxygen depletion by increasing the blood supply to the brain and selectively shutting down non-essential neural functions. By this means they are able to tolerate severe hypoxic periods during tidal fluctuation. It is a serial breeder; a number of mixed gender fish are held in the spawning tank at 26ºC. Each female lays a pair of eggs every fortnight. These are collected and kept separate from adults. Incubation takes 120-130 days and the newly hatched juveniles are fully formed and move straight onto an adult diet of squid and shrimp portions.

Dr James Godwin is in charge of the axolotl breeding program. “Whereas we may have up to 100 pairs of zebrafish breeding on any one day, the axolotls program is a more leisurely process”, he said. “The colony is held at an ambient temperature of 18-20ºC with a 14-hour diurnal cycle.”

To induce spawning, a breeding pair is placed in a tank with natural cover and artificial pondweed.  Vernal conditions are simulated by dropping the temperature to 16ºC and changing the lighting to 12 hours of daylight. Seclusion is crucial, and they are left to their own devices at this point. The pair will enter an extended courtship ritual that involves the female marking certain spots against a rock or a pipe and the male laying a sperm packet on that spot.

The female will sit on the sperm packet releasing an enzyme that will break down the gel and allowing her to ‘absorb’ the motile sperm. After around 15 hours, and when she considers conditions are right, the female will lay her eggs singly on the pondweed.  She can produce between 300 & 1000 eggs and it can take her up to two days to complete the laying cycle.

Incubation takes 14 days.  The young are fully formed and live off their yolk sack for a further 14 days, after which they are fed on Artemia.

As with any aquacultural enterprise, water quality is paramount. The sophistication of the units reflects the importance of the medical research work involved, and demonstrates the efficiency of the recirculation technology that has evolved over the last few decades. The new section of the hatchery — for the axolotls and the sharks — was installed and commissioned by a local company, Fresh By Design (FBD). FBD Sales Manger, Lindsay Hopper, said they had to consider the confined space they had in which to work, and the high degree of water purity that has to be maintained at all times.

“We supplied five separate systems in total: three for the axolotls and two for the sharks. The initial temperatures were set for each system, but they can be regulated by the hatchery staff to suit any change in regime.”

The 7,600-l axolotl growout system is different in that a Favre 2/80 SS Drum Filter with 26µm screens provides mechanical filtration for the water as it is fed by gravity from the tanks to the FBD-manufactured HDPE sump that supports the drum filter. Water is pumped through an RK2 Systems Filtration System comprising an acrylic Protein Fractionator and Fluid Bed Filter for removing protein and dissolved organics as well as providing biological filtration, Emperor Aquatic’s UV system, as well as Toyesi Heat/Chill units. RK2 pumps are also used to sterilize and move the water to the different components and return it to the tanks. An RK2 Ozone Generator provides ozone for added water quality control, introduced via the fractionator and controlled by an Oxyguard water quality monitoring system. The Oxyguard system also monitors dissolved oxygen, pH, ORP and salinity, reporting to a local PC and further to designated remote tablet-based alarms. This alarm system monitors all five systems.

The Quarantine and Broodstock Conditioning systems are maintained by one of FBD’s Mechanical Moving Bed Bioreactor Sumps, which includes a removable gravity-fed bag filter (220µm felt), a moving bed biological filter and sump all built into one compact PVC-constructed filter box. An HCM100 magnetic drive pump draws water from the sump and directs it back to the tanks via a chiller for temperature control, and UV for disinfection.

The marine shark system is divided into two: temperate (3,000L at 16ºC) and tropical (17,000 at 26ºC). Shark Temperate comprises 3 x 500-l Polyethylene and 4 x 350-l glass aquaria. Shark Tropical has 3 x 5,000-l and 6 x 325-l glass tanks. The same design principles are employed as in the Axolotl grow-out system. The major difference being that because it is a saltwater system, the drum filters and fractionators differ in design and materials used. It’s worth noting that the protein fractionator used in the freshwater system has been specifically designed for freshwater use, and why RK2 are world leaders in fractionation.

The system has been designed to exchange water through the tanks four times per hour. UV units are sized to provide dose rates in excess of 60mJ.  Water flow meters are included on pump-to-tank return lines, reporting to the Oxyguard monitoring system. Saltwater and freshwater reservoirs were also supplied by FBD and plumbed to automatically maintain water levels in each system. Aeration is supplied by dedicated diaphragm air pumps.

Lindsay said that building a complicated system in confined conditions at varying levels of the building in the heart of university campus designed for foot traffic wasn’t as straight forward as a greenfields project in an open paddock, but he was quick to praise the co-operation he received from the management and staff at Monash.

With over 100 people employed one way or another in the maintenance, breeding, distribution and management of the breeding program, ARMI’s FishCore arm is a major plank in Australia’s bio-medical research program, and a major supplier of material to other researchers around the world.

For further information on the ARMI program contact Dr Jan Kaslin on: jan.kaslin@monash.edu: and for more details on the FBD program contact Lindsay Hopper at: lindsay@freshbydesign.com.au.