The first time I met David Rideout was in an industry - government meeting in 1999 where he asked me to close my laptop so that the group could have a frank discussion. I didn't know it then but this would be the first of many frank discussions to come. 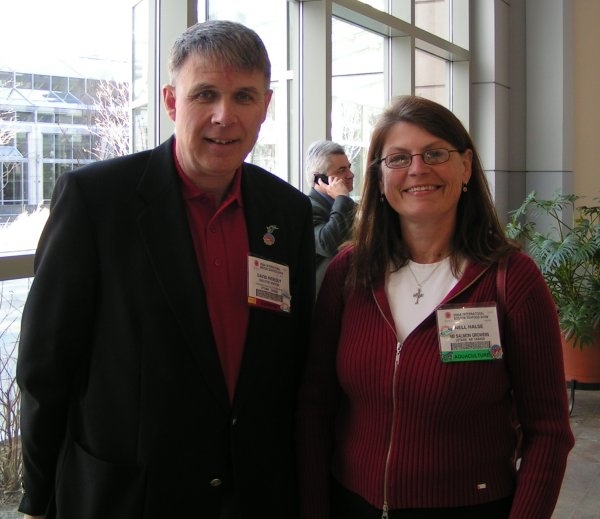 David Rideout and Nell Halse in Boston in May 2004

David was a seasoned bureaucrat with DFO and I was a very new advocate for the New Brunswick Salmon farming industry. I still had a lot to learn about aquaculture but the one thing I knew for sure was that I was there to fight for a fish health policy that supported my farmers and a disaster relief program that would help them overcome fish health challenges in the same way that land-based farmers were supported. Salmon farmers on the east coast were being hit by the devastating infectious salmon anemia virus, and some of my members were going under.

David and I crossed swords many times but he was a good listener with a crazy sense of humor and he eventually went to bat for the sector in ways that no one could have predicted. As the 20th century drew to a close, a few industry leaders decided we needed a sea change from a sector council to an effective, industry-funded organization that could be a strong, proactive voice for farmers in Ottawa. My first task of the new millennium was to travel to Ottawa with the executive director of the BC Salmon Farmers Association, where we made significant changes to the Canadian Aquaculture Industry Alliance office and with the help of company leaders, we subsequently recruited David Rideout as our national executive director.

Over the next seven years, David fought tirelessly with industry leaders for a Canadian National Aquatic Animal Health Program, for new science initiatives, including the Salmon Health Consortium, the Aquaculture Collaborative Research and Development Program (ACRDP), a marketing program under Agriculture Canada, and he challenged companies to embrace the setting of standards and third-party certification. He took his advocacy mandate beyond Canada to the international stage, supporting regional association directors at meetings with non-governmental organizations and activist groups. This included the multi-year Aquaculture Dialogues brokered by the World Wildlife Fund that eventually led to the development and implementation of several internationally recognized third party aquaculture certification programs.

I spent many hours with David during those tumultuous years, in meetings with government, on airplanes to conferences and dialogues: in Boston, Brussels, Chile, Norway and wherever aquaculture was being discussed. We walked many city streets and rural community paths together, talking of our work, and life in general.

David was a great storyteller. He loved his family deeply and spoke proudly of his wife and sons and his desire to make a strong future for them. His vision for the future for aquaculture sometimes stretched beyond our wildest dreams. I remember a conference in St. Albans, NL, when he told the audience that he could see a time in the near future when the community would be a bustling urban-like hub of aquaculture activity. Many people laughed at the idea!

We often thought of ourselves as aquaculture warriors, fighting battles for our ocean farming sector but, in truth, we were much better collaborators. David was tough but his quirky sense of humor and wit always brought levity to many tense situations. And he was not afraid to engage our detractors in dialogue.

David later moved on from CAIA to focus on his own work in certification and standards in the food industry, passing the torch to a new generation of men and women.

As so often happens when career moves take us away from the people we share so much time with, life goes on and we sometimes lose touch. But that doesn’t mean that we forget. Those of us in the maelstrom of aquaculture’s development years, found ourselves in deep and transforming relationships as we worked so intensely and passionately together for the betterment of our coastal and rural communities.

That is why the news of David Rideout’s death fills me with a profound sense of sadness and loss. I am grateful for the opportunity to pay tribute to a dear colleague and friend who touched my life and the lives of so many of us in the aquaculture sector. David Rideout challenged us and nurtured us and was instrumental in bringing us, sometimes kicking and screaming, to where we are today. He was a true champion in a time when we sorely needed one the most.