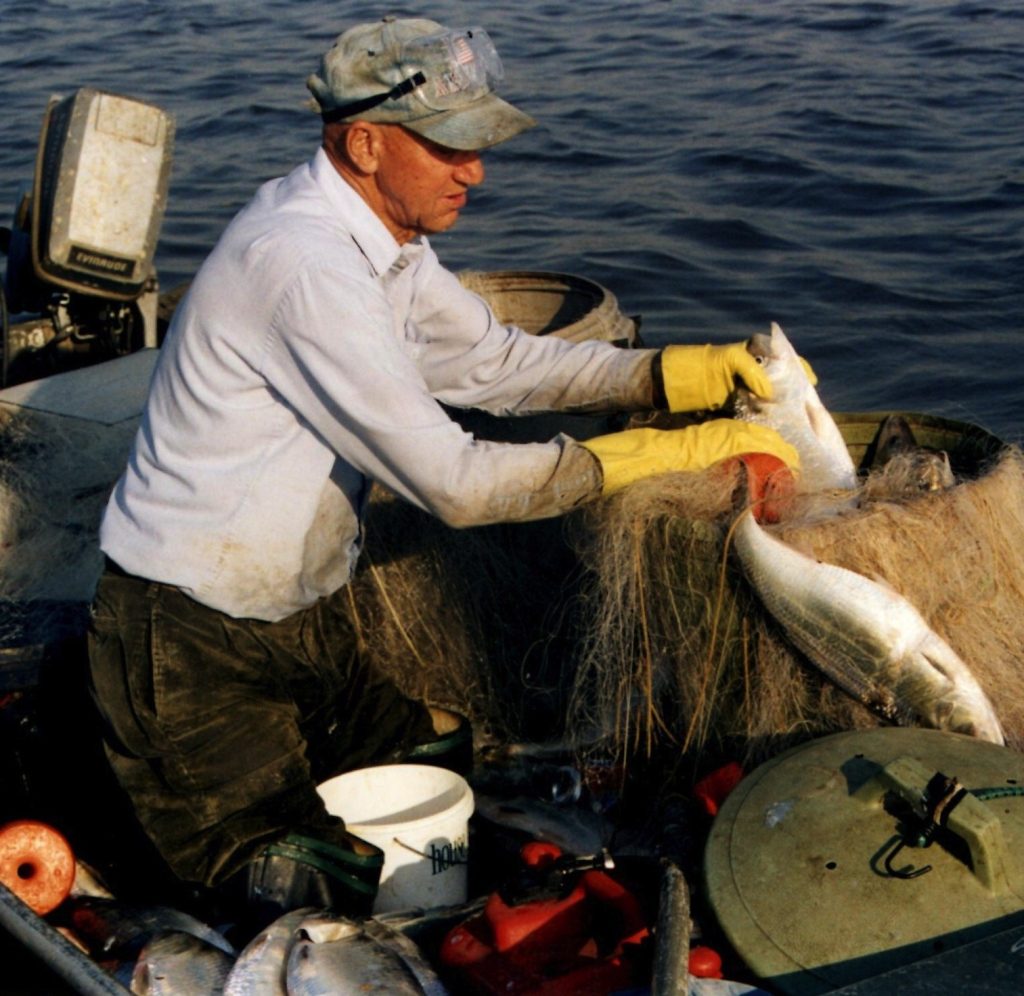 The Pamunkey pay fishermen to collect as many females and males as they can in preparation for spawning. Owing in no small part to the work of the Pamunkey Fish Hatchery

American shad populations are still healthy in the Chesapeake Bay area on the east coast of the United States. This is owing in no small part to the work of the Pamunkey Fish Hatchery run by the Pamunkey Indian tribe. Warren Cook, who ran the hatchery for eight or nine years until a couple of years ago, is modest about the tribe’s work, noting that the nearby Mattaponi tribal hatchery and others, plus the state shad hatchery have all played a part.

But the fact is, the Pamunkey have been caring for shad since 1918 and the fish are part of their culture.

“I love them and I eat them regularly,” he said. “They’re really bony but you can fix them right, so you eat the bones as well.”

Cook also said that a good ripe adult shad has some weight to it, with the females at anywhere between 4.5 and 6.5 pounds, and the males generally weighing about a pound less.

Each year in the spring, said Cook, the Pamunkey pay for up to five single-fisherman boats to go onto the river to collect as many females and males as they can. The eggs are stripped on the river, mixed with milt from the males and then brought back to the hatchery.

The two hatchery staff clean the eggs then a small amount of fresh water is added to harden the eggs, and then they’re placed (two litres at a time) into incubator jars attached to the outside of the initial-rearing tanks.

Cook said it only takes the eggs about four to six days to hatch and swim up, going directly into the tanks and feeding first on their yolk sacs and then on brine shrimp fed to them by hatchery staff.

Within 10 days, Cook explained, the staff pull the plugs on the outflow pipes to the river. The hatchery sits on poles directly over the river, but the tanks are fitted with pipes that lead the fish into the river.

The whole operation, from the start of the broodstock-capture fishery to the end of the release, is about three weeks, Cook said. The selected fishermen get paid $150 a day to catch the broodstock; and the two hatchery staff are also paid the same amount for their time at the facility.

All in all, he said, the program costs between $9,000 and $15,000 a year. The money comes from the state Department of Marine Resources, from corporate sponsors and from the tribe.

Cook noted that releases of shad from the hatchery aren’t what they used to be. At one time, he said, the facility was putting out 3-4 million fry a year. Now it’s down to about one million but the hope is that it won’t be long before there are more.

Although they spend most of their adult lives in the ocean, shad migrate back to the Chesapeake Bay’s freshwater rivers and streams, such as the Mattaponi and Pamunkey, each spring to spawn.