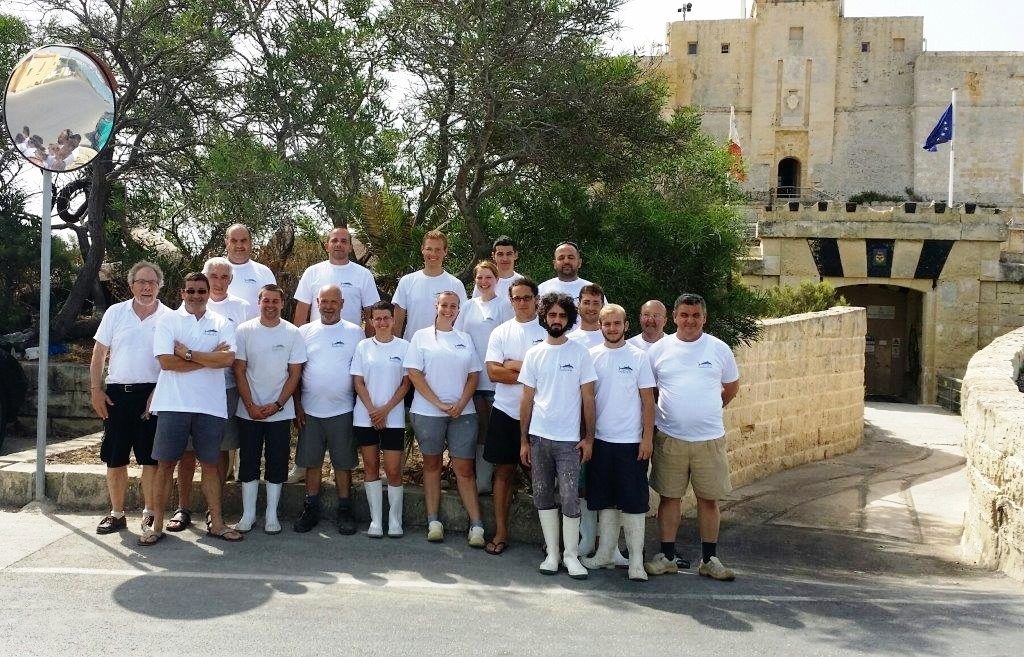 Transdott participants outside the ancient fort in Malta that contains the hatchery.

The European Union’s TRANSDOTT project reports a successful spawning of Mediterranean bluefin tuna. So successful in fact, that they were able to provide their partners with all the eggs they needed with some leftover.

Dr. Chris Bridges, reported that the TRANSDOTT team, based in Malta and working with the Malta Fish Farms company, sent the extra eggs to a number of developing farms as well as to northern Germany, where a student of his with the University of Keil is working with one of the largest water-recirculating-aquaculture firms in the region, dealing in a broad spectrum of fish, from pikeperch and flounder, to salmon, sea bass and sea bream.

“We sent them 300,000 eggs and they all arrived in good condition in Hamburg, for transporting to the North Sea at Busum,” said Bridges, adding that this raises the possibility that Bluefin tuna might eventually be raised in the North Sea.

In total, Bridges said, the Malta unit, under Dr Robert Vasalla-Agius of the Malta Aquaculture Research Centre (MARC), was able to produce an estimated 40 million eggs during a spawning cycle that lasted close to a month. The first eggs were kept for hatcheries in Malta, and after that they were sent to TRANSDOTT partners in Israel and Spain.

By 14 days post-hatch larvae were still surviving. That had climbed to at least one group of 20-30 1-15cm fish up to about 24 or 25 days by the middle of July, Bridges told Hatchery International.

Bridges said that one of the best things about this year’s spawning was that it all began naturally. It was only later, as the researchers tried to get the last eggs from the fish, that induction implants were used.

Malta produced by far the most eggs anywhere in the Mediterranean,” Bridges said. “In Spain, the IEO facility broodstock started spawning late because of low sea-water temperatures down about 22°C – where they really need 22-24 and 22 is right at the bottom of the range.”

Bridges said Malta also sent eggs to Kali Tuna in Croatia, where the spawning had also been “very late” and produced only “very few” eggs.

Bridges concluded by saying that they have discovered if just 1-5% of a hatchery’s tuna broodstock are artificially induced, this can trigger the rest of the stock to spawn, leaving the facility overwhelmed with eggs.

The final results of this third year of spawning efforts under the project are to be reported at a TRANSDOTT wrap-up meeting in the middle of September with the final report be submitted to the EU by the end of November.