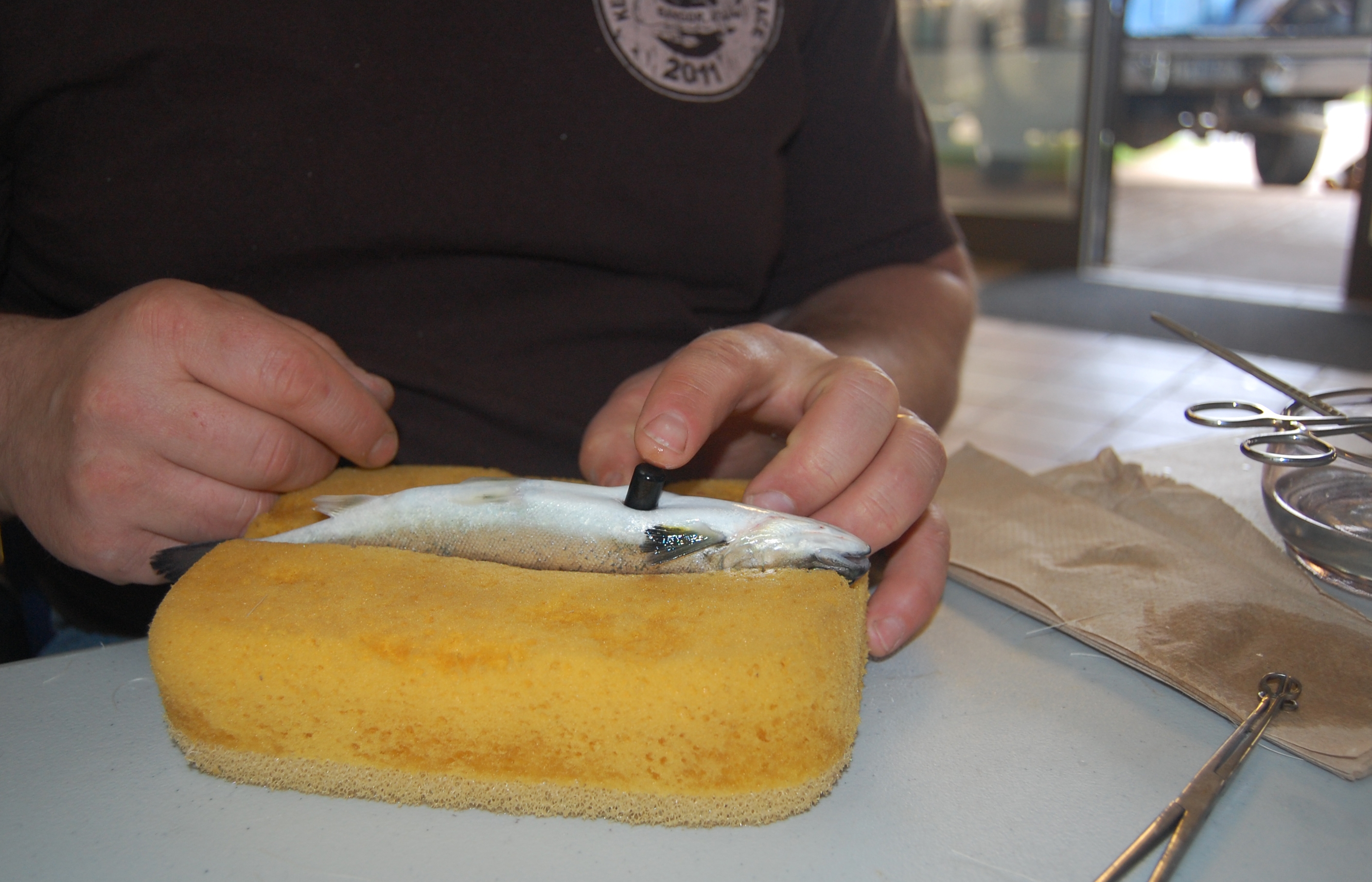 A research team identified that losses were generally in the same location, which they pinned down using acoustic telemetry.

“The detection range of our telemetry equipment is on average a bit longer than four football fields around each receiver depending on the environment, such as width, depth, etc. This information is valuable and allows us to determine where losses occur and identify bottlenecks,” said NEFSC fisheries biologist Jim Hawkes.

From day to night
Stocking times, which had previously been done during the day, have been changed to night. They want to get as many salmon smolts to the ocean as possible.

It is a “numbers game,” they say, because Atlantic salmon smolt survival in the marine environment has always been low.

But to drive numbers up, they need to gather critical data. “The questions we wanted to answer were specific to migration ecology,” said Hawkes.

Through the use of transmitters and receivers, they were able to track and better understand the behavior and survival of 202 hatchery-raised smolts that were released into the Narraguagus River.

Most mortality has been observed within the estuary and bay environments. “The transition from fresh to salt water is challenging for these fish and results in an acclimation period making them susceptible to predators,” he said.

Predation events happen mostly during twilight or daylight hours, a time when most smolt predators are active.

Many of the visual predators take advantage of tidal constrictions such as rock outcrops, to harass, crowd and consume out-migrating smolts. Double crested cormorants, mergansers, osprey, eagles, harbor and gray seals and striped bass as well as other fish species are known predators of smolts.

In freshwater, the smolts generally move with the current during twilight or nighttime. The passive drift ends when they transition to the estuary and marine environments.

Maine to Greenland
“Once smolts leave their natal river, they travel through the Gulf of Maine and exit U.S. waters within 15 to 20 days. They travel northeast along the coast of Canada on the outer Nova Scotian shelf past Newfoundland and Labrador before cutting across the Labrador Sea to Greenland. Atlantic salmon will feed in these highly productive waters for one to two years before returning to their natal rivers to spawn.

“Our tagged smolts are detected by acoustic telemetry networks along the Canadian coast, including the Ocean Tracking Network. These data provide more information on migration timing and location of migratory routes to the feeding grounds,” he said.

Understanding acoustic telemetry
Acoustic telemetry requires two things – a transmitter (or tag) and a receiver. The small battery-operated transmitter emits an ultrasound frequency programmed to “ping” at a specific rate. When a tagged fish comes within a specific distance, a receiver programmed to recognize the transmitter’s specific frequency records the presence of the tagged fish. To tag salmon smolts, scientists surgically insert a small transmitter about the size of a small Jolly Rancher into the abdominal cavity. The smolts are released to the river where they travel downstream toward the ocean as part of their migration.

The team placed receivers at targeted locations along the migration route to help answer their questions about speed, location, behavior and mortalities. One of the key aspects of these transmitters is that each one provides individual-specific data, allowing scientists to track each individual fish separately while hundreds can be tracked simultaneously. Depending on the ping rate, the transmitter battery will last about three months. However, this technology continues to advance as scientists develop better ways to power transmitters with energy generated from fish movements.