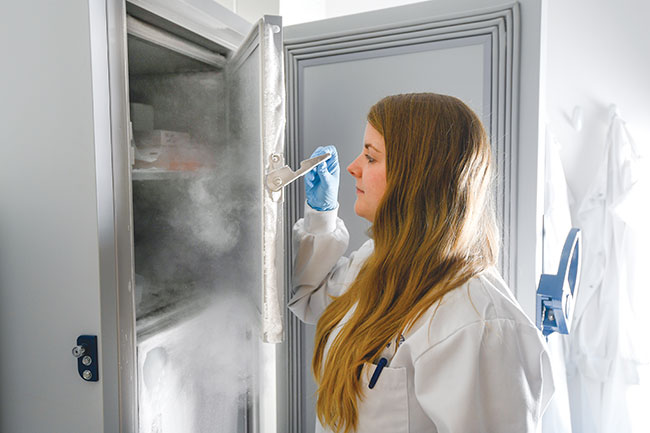 Rachael Wilbourn, 35, never really considered a career in aquaculture. She described it as sheer luck.

Throughout her academic career, her focus had always been on the evolution and ecology of wild animal populations. When her post-doctoral contract at the University of Edinburgh was coming to an end, she found a position as a laboratory manager at Xelect in St. Andrews, Scotland.

“While I had never considered or believed I was experienced enough to take on a management position, I surprisingly ticked many boxes on the advert, so I thought, “Why not?” and applied,” Wilbourn admitted modestly. “After spending almost two hours at Xelect, I was absolutely thrilled.”

She describes Xelect as a small, but ever-growing aquaculture genetics company. All departments work closely together on a daily basis, which is what she likes most about her job. Tom Ashton, director of Xelect, nominated Wilbourn because of the great commitment she displayed to the company’s customers.

“When our usual panel of suppliers were unable to meet our requirements, Rachael had to scour hundreds of suppliers, sourcing key items from a patchwork of providers. This was further
complicated by major issues with the global supply chain, meaning that deliveries were often subject to major delays,” said Ashton in his nomination form. “Thanks to Rachael’s resourcefulness and initiative, not a single job was delayed, and the hatcheries we support were able to continue to operate unaffected.”

Wilbourn’s laboratory work supports more than 20 customers in 18 countries and covers 15 different species. Ashton said she also plays a vital role in recruiting, training, and growing the team, especially in what were difficult circumstances during the pandemic lockdown.

“Hatchery managers in every continent depend on Rachael and her team to genotype and analyse thousands of fish and shellfish every day,” said Ashton.