Features Research
There’s something in the water….Salmons’ secret weapon 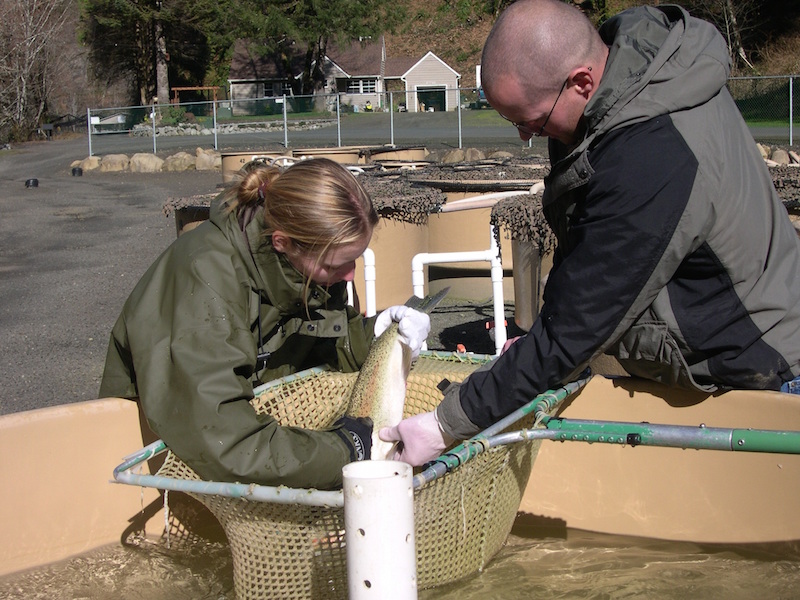 Researchers in the United States are investigating the remarkable ability of salmon to imprint on the scent signature of their natal stream and what implications this has for enhancement hatcheries using well water for developing smolts.

“A fish’s sense of smell is probably 1000 times more sensitive to chemicals than a human being’s,” says Dr. David Noakes of Oregon State University. He’s part of a team of scientists that may have found a hidden weapon these salmon carry with them that aids in navigation. He and postdoc researcher Dr. Nathan Putman have been working in conjunction with the Oregon Hatchery Research Center (OHRC) in the Alsea River Basin near Corvallis, Oregon to look for clues that help in salmon migration.

It turns out that salmon are able to use that keen sense to home in on smells in their natal stream water, and not just obvious smells, but the very precise chemical make-up of the stream.

Using their very sensitive nasal receptors they can pinpoint the unique amino acid profile of the water that can be different based on the flora and fauna in that stream, even detecting the unique mucus, or “slime biota” that covers other fish.

This was the first time that the importance of sequential imprinting on water starting from the egg stage was discovered, and imprinting increased as fish developed into smolts. After leaving the stream, the maturing adults retain these “odor memories.”

Just like geomagnetic cues are used in the ocean to help guide salmon back to the exact stream mouth they emerged from a few years earlier, olfactory senses pick up the unique scent of the water as they travel upstream and their memory guides them to the exact chemical signature and spot where they were spawned.

The role of olfaction in discriminating home-stream odors has been tested by Japanese researchers, but here first trials were performed in 2014 by OHRC collaborator Andy Dittman from NOAA’s Northwest Fisheries Science Center in Seattle. The behavior experiments were carried out to test the preference for upstream movement in either artificial stream water (well water) or natural lake water in a y-maze consisting of two water inlet arms and one pool.

Adult hatchery fish that had been raised with lake water were used and they showed a much greater preference for upstream travel in the natural lake water arm over the artificial stream water. Later, manipulation of the amino acid profiles of the water introduced to fish showed that it was the complex mixture of amino acids in their natal-stream water that salmon responded to, and not single amino acids.

Other studies involved adding PEA, a synthetic chemical, to water in one population of hatchery coho during early development. Similarly, this resulted in only those exposed to the odorant being attracted to water scented with PEA as adults, suggesting imprinting taking place during development.

Currently many, but not all hatcheries use well water to rear salmon and steelhead. When asked

if sterilizing the stream water that comes into hatcheries (a common practice at some facilities) would disrupt its smell signature, Noakes said… “It is important to point out that sterilizing stream water does not turn it into well water”, meaning that the important amino acid profile would still be intact, and this water would still be preferable for imprinting over well water alone.

Obviously many facilities find well water the most convenient to rear fish since it is a consistent year-round source, well oxygenated and generally free of parasites. But if adding a small amount of stream water to the hatchery well water during egg incubation and fry growth was able to guarantee a much more robust return of adults, then this solution could offer a big payback- without much inconvenience and little to no cost to implement for the hatcheries.       Currently the return rate for coded wire tagged fish released (one way to monitor hatchery raised fish) is < 1%. Ironically, these tags are implanted in the snout of juvenile salmon near the nasal receptors, which in light of Noakes’ finding might seem problematic to begin with.

But the take-away is this: what’s good for hatcheries is also good for wild fish populations in terms of reducing stray rates. Further trials are needed to tease out the amount or ratio of stream water that needs to be added to well water to make an imprint on developing fish. And of course these developing fish will need to be marked, released as adults, and monitored to see if they are able to find their way home. Since adult salmon generally take about 2-3 years to sexually mature and return to spawn, it will take a few years before researchers will know the results of their work now. For trial fish expected to be released into the Elk River in Southwest Oregon in 2017, nothing will be known until at least 2019.

The fish may be gone but will not be forgotten. You can bet that many state and federal hatcheries will be eagerly awaiting their return. If Noakes and his team are successful, he expects it to be an “all or nothing” deal….instead of usual stray rates of about 5%-10%; he would expect the stray rates to drop dramatically- “to 0% strays.”

The importance of getting it right

Home is not just a safe, cozy, and familiar place for salmon; it’s the end point of a long journey that can spell success or disaster for the next generation.

In their short lifetime, anadromous fish like salmon travel hundreds of miles from home to the ocean to feed, then must return to their natal stream to spawn and die. That means they will only get one chance to get it right and pass on their genetic material to the next generation. Along their long arduous trip salmon encounter many perils and obstacles that will try and stop them, including animal and human predators, man-made dams, naturally made log jams, temperature fluctuations and confusing geomagnetic signals. The odds seem stacked against them….but now researchers are trying to find ways to increase those odds and help stimulate salmon populations. “If they take one wrong turn along the way, it’s all over,” says Dr. David Noakes of Oregon State University.

“Homing traits for spawning cannot be learned, they must be inherited,” asserts Noakes.

And the impacts of not getting this behavioral part of their life cycle right are huge. To begin with, the very basis of salmon identification comes from spawning habits. Noakes points out, “Salmon are recognized and named based on where and when they travel to spawn – for example, Spring Chinook, Fall Coho run, etc….so spawning is an essential component of identification”.

Not only can straying interfere with this identification, but a large part of a hatchery’s’ success is having all or most of its released salmon return to spawn at their natal hatchery. In this way, released hatchery salmon can absorb some of the fishing pressures of wild salmon and correctly return to the hatchery via separate streams than their wild cohorts, leaving more of the wild stock to spawn successfully with less resource competition.

Having too many hatchery-released fish or too many finding their way into the wrong streams can put undue pressure on wild salmon, and so hatchery populations and stray rates are carefully monitored by both the Department of Fish and Wildlife and NOAA.

To date, stray rates of about 5%-10% or less of the overall salmon population for Alaska, Washington, and Oregon have been found to be acceptable and normal levels. Stray rates above those levels for an extended period of time can be cause for concern, as was the case in Alaska. According to Alaska Department of Fish and Game’s Richard Brenner…. “The levels of hatchery salmon strays in many areas of Prince William Sound are beyond all proposed thresholds… which confound wild salmon escapement goals and may harm the productivity, genetic diversity and fitness of wild salmon in this region.”

If a hatchery’s fish are found to be stressful or inhibiting to wild salmon populations in its area, they can be shut down or scaled back. For example some coastal Oregon coho hatcheries were shut down once that species was listed under the Endangered Species Act (ESA).

But closing hatcheries can also have a negative impact on tribal communities that rely on those fish numbers, as well as commercial fisherman….and ultimately may put more fishing pressure on the wild salmon they were shut down to protect in the first place.

Besides competing for resources, there is a growing concern that hatchery strays will intermingle with returning wild populations and cross-breed, which can have an effect on the overall fitness of the next generation.

Dr. David Noakes of Oregon State University cites a “30% loss of fitness every generation away from wild stock and this includes genetic fitness as well as spawning fitness.”

These negative environmental impacts of straying hatchery fish have a lot to do with what fueled the interest for Noakes’ and OHRC’s current studies. The research team wanted to look at what it was that enabled salmon and steelhead to not stray off course, but instead navigate many miles of stream and ocean waters and pinpoint the exact location of birth to return for spawning two to four years later. Putman explains: … “salmon likely have a whole suite of navigational aids that help them get where they are going, including orientation to the sun, sense of smell, and geomagnetic imprinting”…. (imprinting that Putman and Noakes were the first to establish). Now they have discovered  another secret weapon to add to that list……